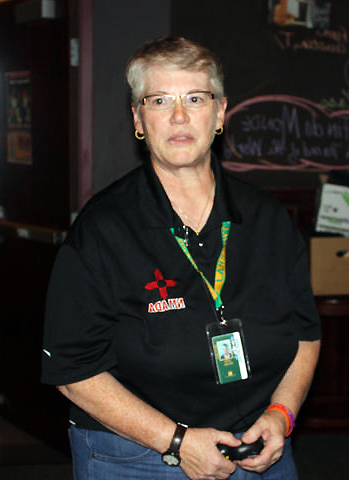 Los Alamos High School Athletic Director Vicki Nelms and four of her coaches spoke to the Rotary Club of Los Alamos Sept. 3 at the Dixie Girl.

The athletic officials urged the community to come out and support the Hilltoppers this season. Nelms gave an overview of the LAHS athletic program saying more than 20 sports are played competitively at the high school, which has more than 100 coaches on its roster.

Forty-five percent of girls (257) and 49.9 percent of boys (263) at LAHS participated in sports last year and Nelms said she is proud of the fact that the average GPA of student athletes is 3.33. 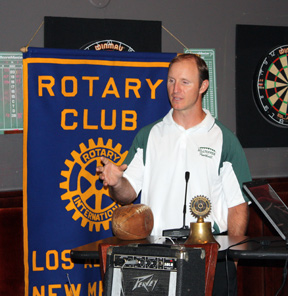 Head Football Coach Garrett Williams with a vintage football from 1946, the first year the sport was played at LAHS. Photo by Bonnie J. Gordon/lacailypost.com

Head football coach Garrett Williams has been coaching at LAHS for six years, four as head football coach. He uses an interesting prop to inspire his teams, a football from 1946, the first year of football at LAHS signed by the members of that first team. The first team had a 10-0 winning record. 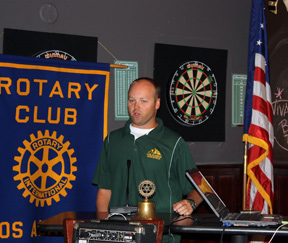 Boys Soccer Coach Evan Gartz has been coaching for nine years. “Coaching is my passion,” he said. “I graduated from LAHS in 1997 and I’m so grateful to be coaching here. It’s always been a dream of mine.” 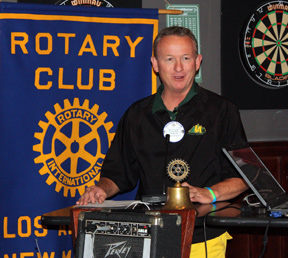 Girls Golf Coach Mike Lippiatt is in his fourth season. During the past three seasons his team won two district championships. Lippiatt was named District 24A Golf Coach of the Year for 2013. Lippiatt is a member of the Rotary Club of Los Alamos. He told the group that he enjoys supporting community activities and feels a special commitment to youth. 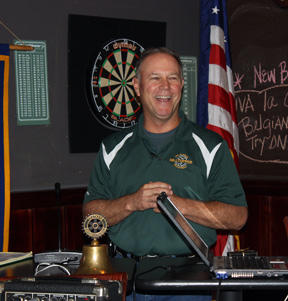