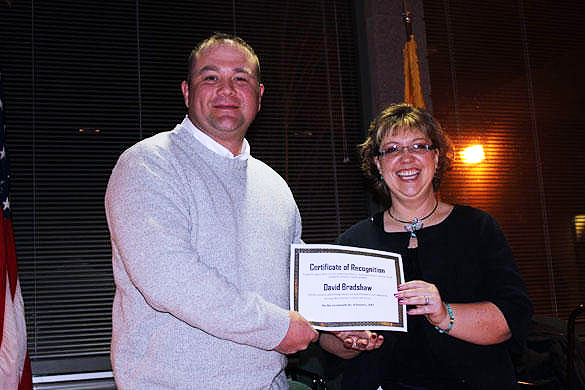 David Bradshaw of the Los Alamos Police Department is recognized by 2015 New Mexico Teacher of the Year Debra Minyard. Photo by Chad Lauritzen

The Community Asset Awards, sponsored by the Los Alamos Commerce and Development Corporation’s Assets In Action program drew more than 80 attendees to recognize the work of a few that benefit many day in and day out.

It may be the good work of those building homes for the poor, like Sally Grindstaff and David Griggs, those who make musical and theatrical presentations like Tom Severinghaus and Ann McLaughlin and her work for the Los Alamos Concert Association or John Kottman being role model at the YMCA or fostering dogs and making helping them to learn manners that will get them adopted from the Santa Fe Shelter.

The idea that in a small town, no less than two Andy Ericksons were nominated caused a slight panic. “I was so nervous to make sure we indeed had both Andys represented,” said Bernadette Lauritzen, Assets In Action coordinator. “Ironically both had joked that it must be the other one because they were the ‘Bad Andy.”

Lauritzen said both were “good Andys,” donating hours of their time for youth serving programs like the science fair, Lego team and Robotics team.

Local businesses were proudly represented by their staff by going the extra mile to provide service with a smile and help customers thrive. Crossfit, Smith’s Food & Drug Stores, Sylvan Argo from the Family YMCA, Dave Fox of CB FOX  and Joanna Gillespie of the Los Alamos Public Schools Foundation, and UNM-LA’s Alex Zebelewicz, just to name a few.

“The beautiful thing was that people are acknowledged for being good people and creating a welcoming space for the youth of our community,” Lauritzen said. “Barbara Pigott, Barbara Stoddard, Dawn Brown, Kate Stoddard and Rita Chavez love kids and families and show it every day in many ways.”

Lauritzen thanked the community for supporting fundraisers that helped to pay for the 2014 Community Assets Awards. The Blue Window Bistro supported the effort by donating their fabulous chocolate mousse desserts to the Festival of Chocolate and the Morning Glory Bakery collected spare change for several months.

“I could literally write an article about everyone nominated, but there isn’t enough time in the day,” Lauritzen said.

The big winners of the night, those that received the Spirit of the West Award, named for former County Councilor Jim West, were Jim Hay and Reine Williams for their countless service to the American Legion. Hay, a disabled Vietnam Veteran donated more than 900 hours to coordinating a renovation of the Legion’s kitchen facilities, saving the local eatery almost $30,000. The pair, who both have served or currently serve as Legion Chaplains, were nominated by Kitty Gandee, herself a long standing volunteer.

The Spirt of the West winner is selected by an anonymous committee annually. The award is hand crafted and for the second year was created by artist, Richard Ronquillo. Ronquillo, who owns a welding and fabrication business in northern New Mexico, donates the labor for the beautiful trophies.

This week the Assets website will be updated to highlight the many recipients and launch the new call for nominees in 2015.