The Los Alamos Rotarians are set to host their third annual “All-You-Can-Eat Crab Fest” fundraiser, which includes prawns and chicken (for those who don’t eat seafood) Sunday Feb. 26 at Central Avenue Grill.

Festivities for the club’s fundraiser begin at 5:30 p.m. with a cash bar followed at 6:30 p.m. with dinner, music and silent and live auctions featuring golf with a pro, salmon and Asian dinners for eight, spring yard-cleaning, computer consulting, artwork, California wines, jewelry and gift certificates 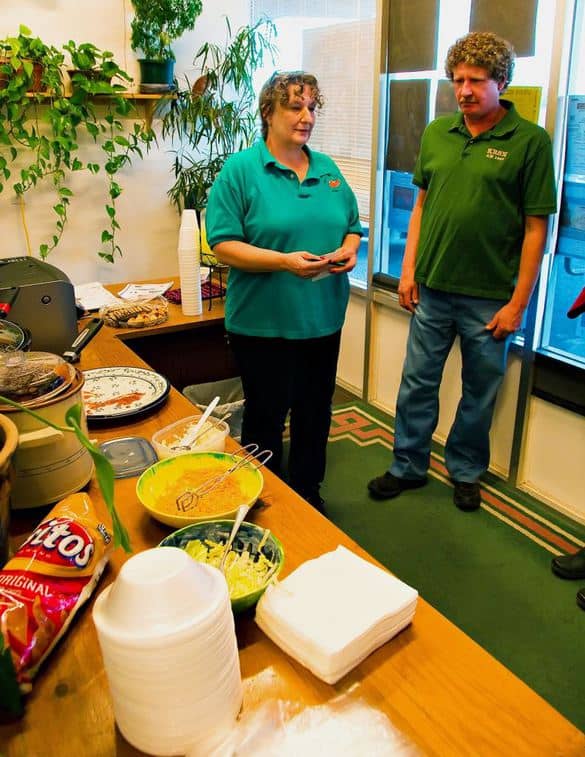 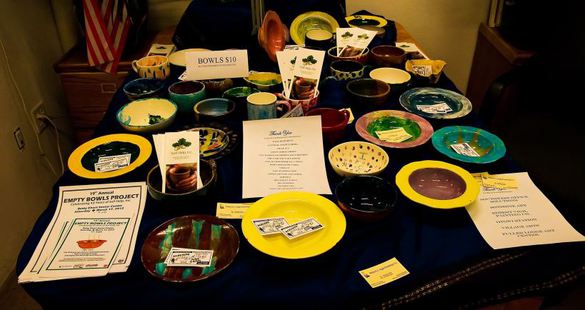 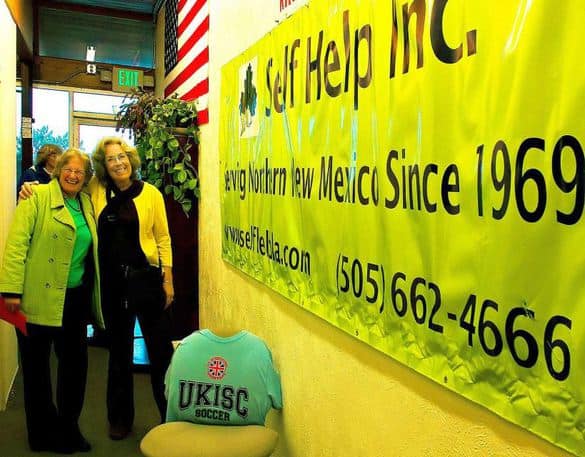 Katy Korkos, left, of the Los Alamos Chamber of Commerce and Debbie Gill from the Juvenile Justice Advisory Board attended Thursday’s Empty Bowl and FAN Club event at KRSN. Photo By TK Thompson/ladailypost.com

One Alone is not Enough… 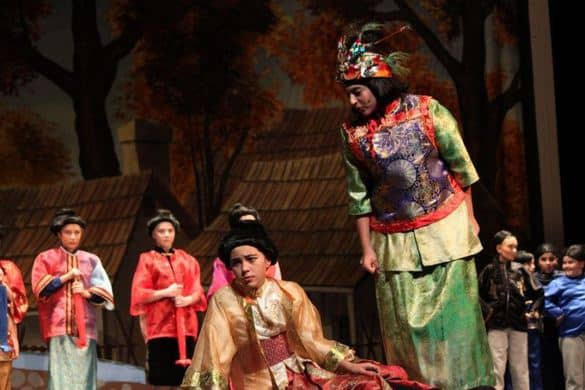 A scene from “Mulan, Jr.” performed in 2011. Courtesy/Daren Savage

This production features many of the songs from the movie, as well as some new songs written especially for this show.

ACCT’s Co-Directors, Julia Fair and Daren Savage were both very pleased with the level of talent that tried

Get Bitten by NMDT’s Eerie and Elegant ‘Dracula’ 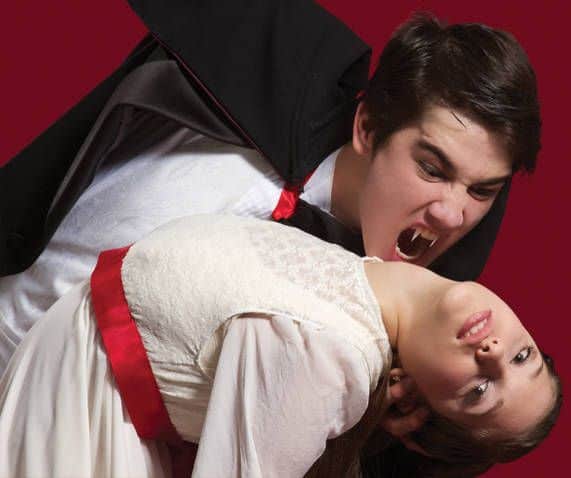 You have one last chance to catch the stunning original ballet “Dracula” at 2 p.m. Sunday, Feb. 19 at the Duane Smith Auditorium in Los Alamos. Don’t miss it. New Mexico Dance Theater Performance Company brings the iconic story of the master vampire to life in a production that, much like the Count himself, is elegant yet eerie, thrilling yet poignant.

UNM-Los Alamos is hosting the free film series, “Fairy Tale Thursdays” at 6 p.m. every second and fourth Thursday through May in the UNM-LA Student Center Lecture Hall.

The series will explore the rich tradition of fairy tales in film.

Deemed one of the best dramatic presentations of the Beauty and the Beast fairytale, Cocteau’s direction mixes fantasy with

Original Ballet “Dracula” is a valentine of a different kind 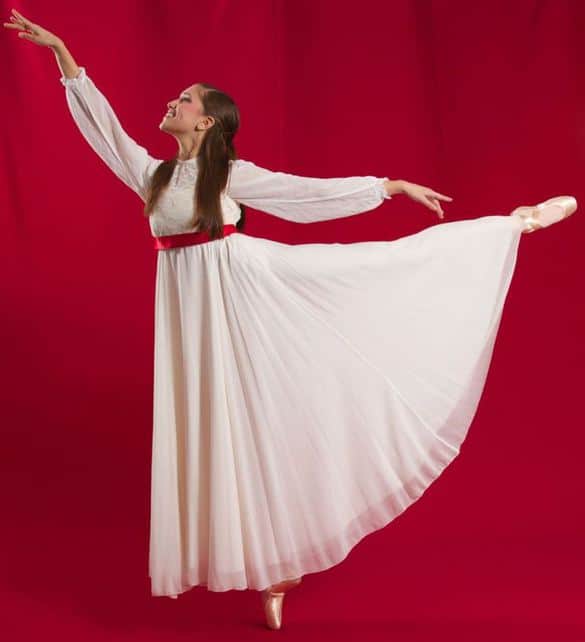 Get ready for heart stopping romance, action and drama this weekend, as The New Mexico Dance Theater Performance Company (NMDT–PC), under the direction of Susan Baker-Dillingham presents “Dracula.”

NMDT–PC is a non-profit training ground for pre-professional dancers located in Los Alamos. During its seven years history, NMDT has gained acclaim for its original story ballets choreographed by Baker-Dillingham, including “Dracula,” “Snow White,” “Cinderella,” “The Wonderful Wizard of Oz,” “Alice,”

It’s Tyme for Shakespeare with the LA Community Winds

Lovers of Renaissance music and lovers of the bard are in for a treat when The Los Alamos Community Winds presents a Shakespeare-themed concert at 7 p.m.  Saturday, Feb. 18 at Crossroads Bible Church. The church is located at 97 East Road (as you enter Los Alamos from the main hill road).  As always Winds concerts are free, although donations are gratefully accepted. 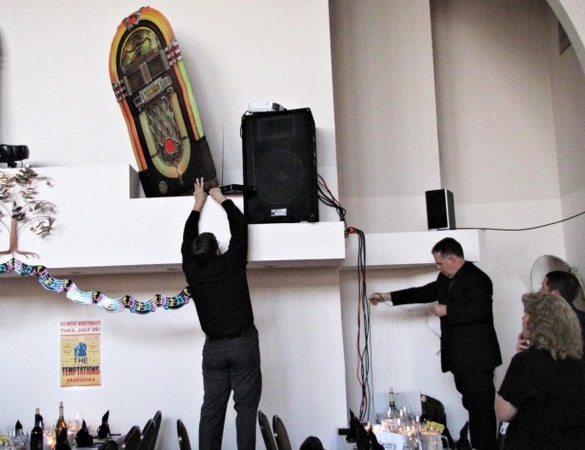 Preparing audio equipment for the Ball Saturday afternoon.
Photo by Carol A. Clark/ladailypost.com 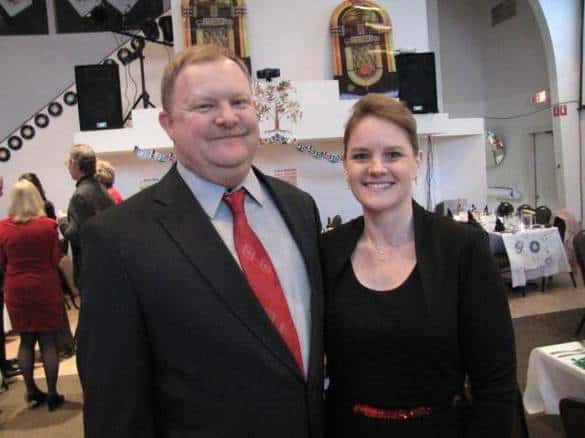 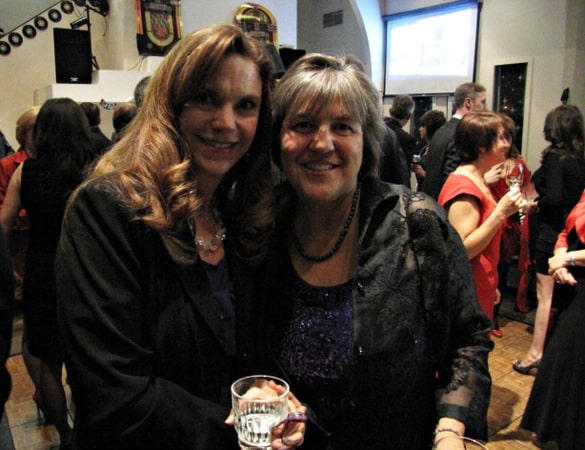 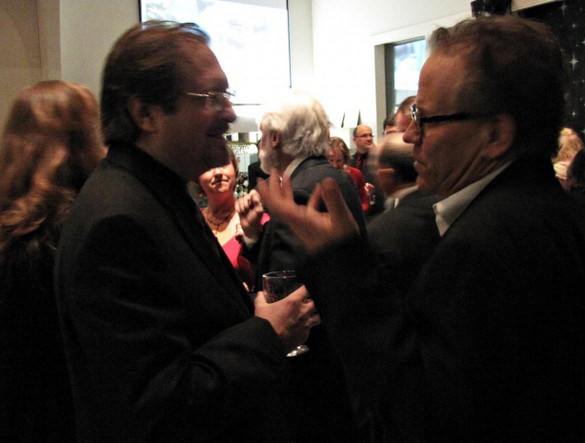 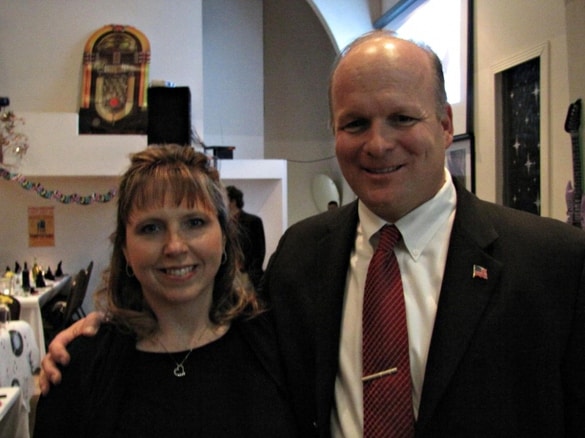 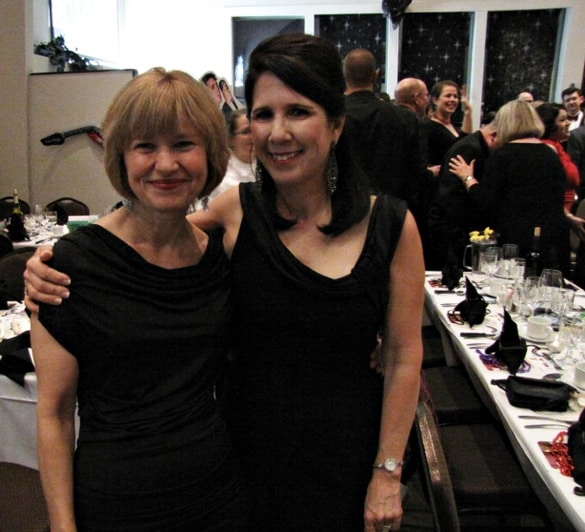 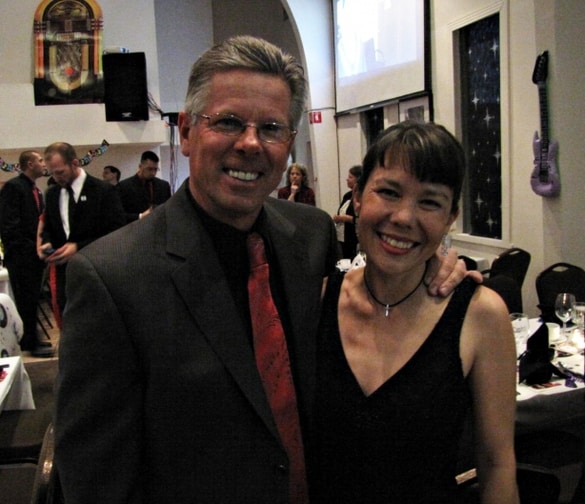 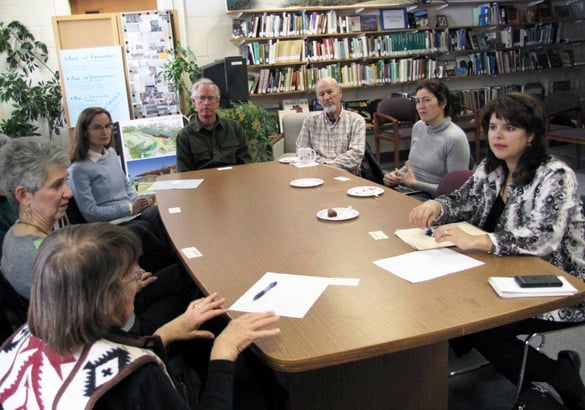 A Nature Center for Los Alamos? Public meeting before the CIP committee at

YMCA Red and Black Ball Rocks Back to the 1950s 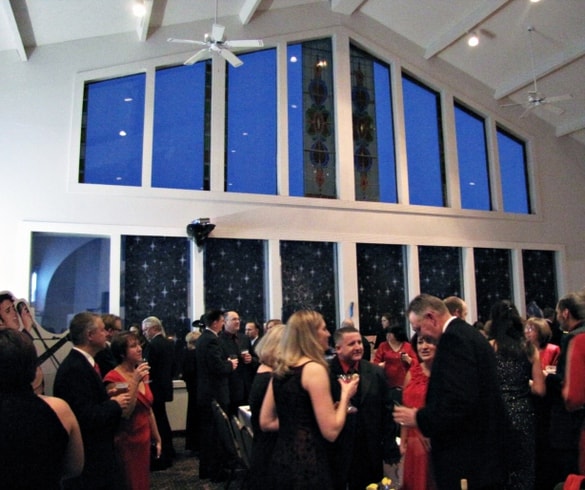 A sold out crowd attended a fundraiser for The Family YMCA 2012 “Strong Kids”
campaign at the Hill Top House Hotel Saturday night. Photo by Carol A. Clark/ladailypost.com 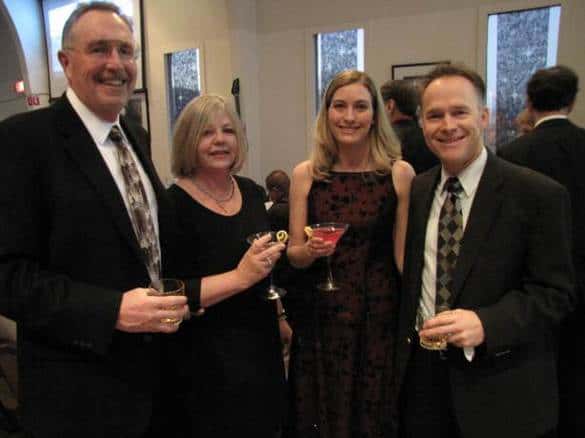 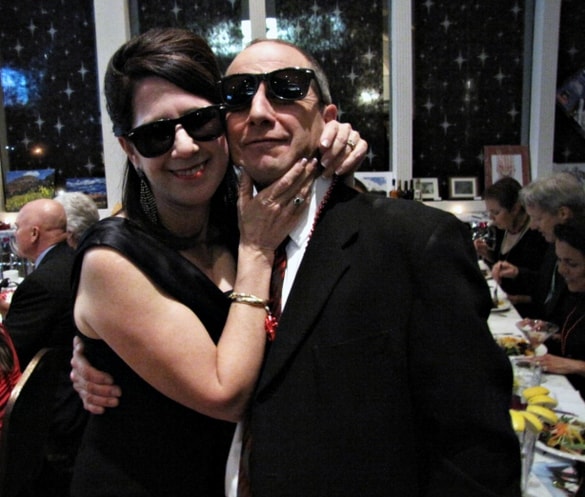 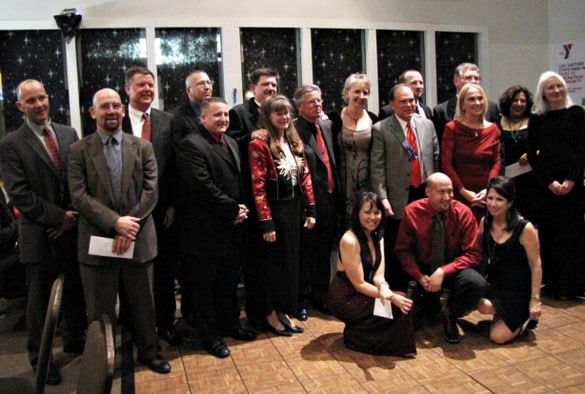 YMCA Supporters and Board Members gather for a group photo.
Photo by Carol A. Clark/ladailypost.com 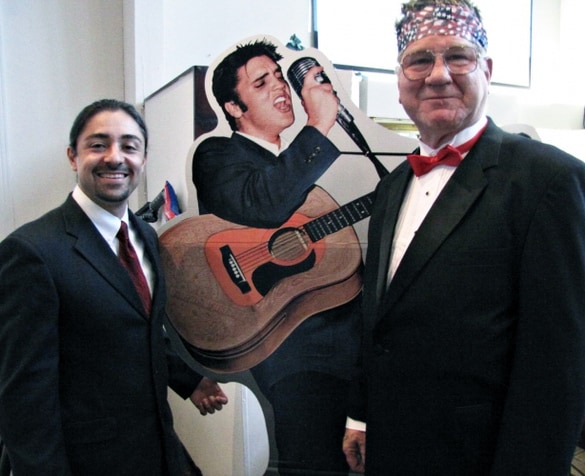 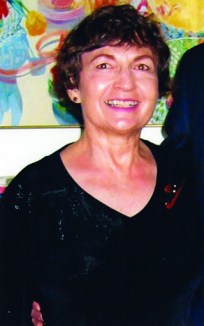 Hear world class piano music for a good cause when Juanita Madland performs a Valentine Benefit Concert for The Los Alamos Arts Council at 7 p.m. Sunday Feb. 12 at Fuller Lodge. Tickets are $20 and may be purchased at CB Fox or at the door.

Madland is a Los Alamos treasure. Although she performs in venues around the world, she generously shares her talents often in her home town, usually to support a worthy cause.

Her program on Sunday will be chronologically organized and will range from the baroque to the contemporary. Madland calls herself 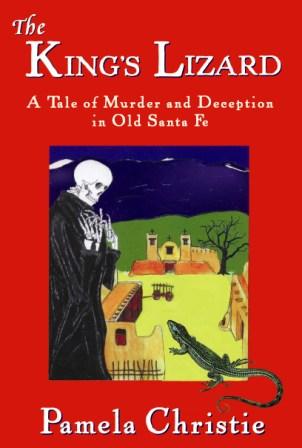 “This is what my honored grandfather told me, all of it. Someone long ago taught him how to tell a tale, someone who knew what to do with the space between En Años Pasados and Así Fue*. When we sat up together nights, waiting for babies to be born or for horses to foal, for travelers to return, or for news of the men who ran to the mountains after the uprising, he told me of those murderous times….” 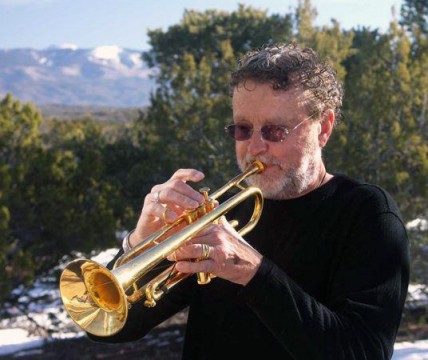 Things will swing at the Blue Window Bistro on Saturday, Feb 11 when the restaurant hosts a Jazz Night featuring the Jan McDonald Jazz Trio.

The Trio will perform from 7- 9 p.m. with Donna Smith on piano, Richard Snider on bass and Jan McDonald on trumpet and flugelhorn. Tickets are $15 per person and dinner reservations are required at 662-6305.

The regular dinner menu will be offered from 5-9 p.m. All menus are posted at labluewindowbistro.com. Walk-ins will be accommodated if possible. 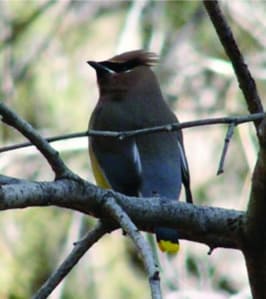 Veteran birder Dave Yeamans will offer guidance on recognizing the most common winter birds in Los Alamos and White Rock.

Yeamans uses photos, books and websites to help participants get started with basic birding, or increase intermediate expertise. He will teach tips for recognizing birds by their colors, silhouette, behavior and feeding habits.

Make a Date with History

In honor of Valentine’s Day, the Los Alamos Historical Society is inviting the community to “Make a Date with History.” 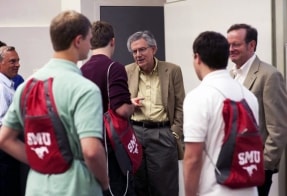 Dr. James Hopkins, a professor at Southern Methodist University, will continue the Historical Society’s lecture series with his talk, “Oppenheimer and his Colleagues at Los Alamos” at 7:30 p.m. Feb. 14 at Fuller Lodge.

So what attracts people to J. Robert Oppenheimer?

Hopkins said, “Oppenheimer is a familiar and affecting figure to anyone interested in the Manhattan Project but it 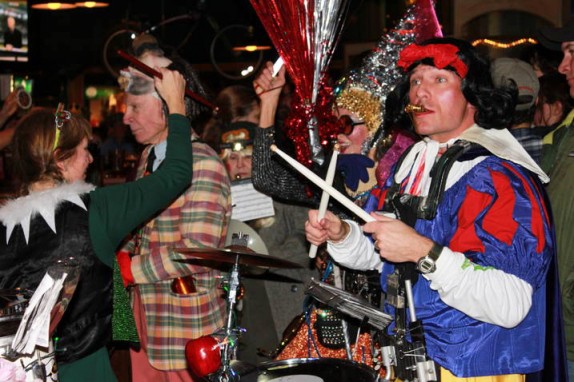 It’s Durango’s only nighttime parade where light-bedecked floats create a dazzling delight in Durango’s most spectacular and entertaining procession along the banks of Main Avenue.

The Hill Stompers will next play at the Mardi Gras Pub Crawl Tuesday, Feb. 21, where

Sixty Seven Years Ago: The Battle of Iwo Jima with Veteran Bill Hudson is a special event set for 7 p.m. Feb. 14 in the  Mesa Public Library Upstairs Rotunda. 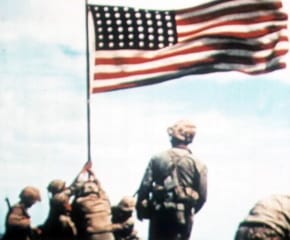 A video, including an interview with a local Iwo Jima Marine Corp veteran will be shown. Battle veteran Bill Hudson of Los Alamos will present the video “Uncommon Valor: The Battle of Iwo Jima,” produced by the Canadian History Channel.

On this Valentine’s Day, this showing will commemorate the 67th anniversary of that historic battle and all the loved ones who fought and those who were lost.

This video has not been aired