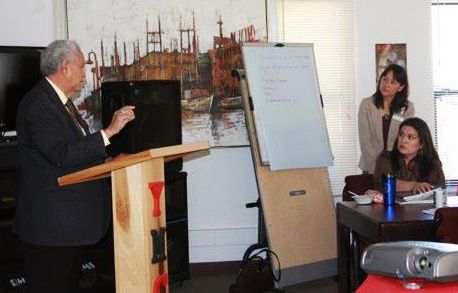 “When I was last here, I visited with a group of teens and I asked them what they would be doing if the Center was not here,” Luján said. ‘One said, ‘I would be getting into trouble, selling drugs and stuff like that.’ ”

Linda Daly, Executive Director of The Family YMCA, said that of the Teen Center’s $155,100 budget, the City of Española provides $45,000, United Way of Northern New Mexico $25,000, “and the rest we must raise. Currently the Y is subsidizing 71percent of the budget. We just cannot sustain that level without having a negative impact to the entire Y organization and other programs.”

According to a fact sheet provided by the Y, which operates the Teen Center under a contract with the City, 521 youth were served in 2011, in 250 operating days open, which equals a cost of $620/day. Considering the 521 youth served, it costs $300 per teenager to provide a tutor and skill-building programs each year.

“Think of this in terms of your own family budget,” said Jack Ortega, director of the Rio Arriba Juvenile Justice Advisory Board. “Your neighbor drops off a loaf of bread, another one a jug of milk, that’s wonderful, but you really need basic funds that you can count on to survive.” Addressing the community leaders he asked, “If you have control of a budget, think about what you can do to provide recurring funds of support.”

Ortega compared grants and small donations to ornaments on a tree and emphasized it was the tree that needed support. He said it was a small number of at-risk students with disruptive behaviors that creates a negative ripple throughout the schools and community. It is these at-risk youth, he said, that need ongoing mentoring and support.

Rio Arriba Assistant County Manager David Trujillo said he has witnessed Teen Center Director Ben Sandoval’s activity in the community and understands the importance of the work. Trujillo said it would be in everybody’s best interest to see a line item created to have a steady stream of funding. The county is approaching a new cycle and he would like to see funding directed to the Center, he said.

State Reps. Nick Salazar and Debbie Rodella both recommended that the Y begin having discussions with the state’s legislative finance and education committees in the next few weeks. They recommended that these meetings also be represented by community leaders. Salazar reminded the group that he was able to direct a $20,000 appropriation that was provided in January of 2009.

“But is it much, much harder to do that now as pork and line items are being removed,” he said.

Luján praised the on-the-ground daily intervention work of Sandoval and his staff, and suggested partnering with the Española School District for providing credit type courses, and formal out-of-school programs that could provide funding.

Sandoval responded that he, Ortega and Superintendent Arthur Blea are currently having those conversations. Luján also pledged staff support in seeking existing federal grants for support.

The Y began operating the Center in October of 2007 at the request of city leaders. The city has provided funds for its support from $38,000 to $45,000 per year, and in-kind support including the building, utilities and occasional facility support. The city’s direct support approximately covers the cost of one staff person. The center requires at least three staff members and program supplies to operate.

The Y added responsibilities to an existing staff member to seek support to sustain the center, and is covering all administrative oversight costs in the amount of  $44,427/year that includes a portion of human resources, accounting, and insurance. “But it is the steady stream of $85,000/year to cover the cost of staff to keep the door open where we need a commitment,” Daly said. “We’ve been able to interest numerous funders, including the Daniels Fund.  Our congressional delegation has assisted us in obtaining $125,000 of federal dollars to the center, and the state’s Commission for Community Volunteerism and others have helped, but funders want to know what is the plan for creating a self-sustaining program.”

Former aide to Sen. Pete Domenici and Y Board member Veronica Rodriguez commented that $300 per child is an amazing figure.

“I used to analyze budgets, and for a program serving youth, that’s pretty low,” she said. “The Center’s staff members are pretty thrifty.”

Michael Lopez, representing Sen. Tom Udall’s Office, commented on the slide show of youth involvement at the center. He spoke about the necessity of programs that make a concerted effort to pull kids from at-risk behaviors. “I was one of those kids, our family suffered great tragedies,” he said. “With the help of programs like this, my family and I were able to make a conscious decision to remove ourselves from those choices.”

Mayor Alice Lucero noted that the city will also be lending additional support to the Center that is raised at an Aug. 4 car show.

“That is exactly what is needed,” Daly said. “Direct community support and leaders to participate in advocacy and fund-raising. We need committed individuals to serve on the advisory board, or volunteers to lead a major fundraiser. Right now the Y’s annual campaign fundraising drive is going on. Anyone can make a pledge to directly support the Center, however, please … donations help, but our request is that local entities create a budget line for the Center and its future.”