Anticipating Annular Eclipse of the Sun May 20 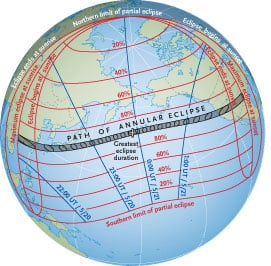 The May 20 solar eclipse will be the best such event visible from the U.S. in decades — with a stunning annular ring observable from California to Texas.
Eclipse-lovers haven’t experienced a “central” solar eclipse from U.S. soil in nearly two decades (1994 be exact.)
But those of you out west will soon have a good chance of seeing one on May 20, 2012, when the path of an annular eclipse covers a wide swath from northern California to the Texas Panhandle.

May’s event is called an annular or “ring” eclipse because the Moon passes directly in front of the Sun but will cover only 88 percent of it. The undersize lunar disk results because the eclipse occurs just one day after the Moon reaches apogee, the most distant point in its orbit around Earth.

So the black lunar silhouette will appear completely surrounded by the Sun’s disk from a generously wide path that’s at least 150 miles (240 km) across. Astronomers refer to this kind of incomplete lunar shadow as an antumbra.
Many towns in southwest Oregon (such as Medford), northern California (Eureka, Redding), central Nevada (Reno), southern Utah (St. George), northern Arizona (Flagstaff) and New Mexico (Albuquerque), and northern Texas (Lubbock) lie within the annular zone.
Remember: the farther east you are along the track, the more important it becomes to find a clear western horizon. The table below shows a sampling of well-positioned cities and towns.

More than 30 U.S. national parks lie within or very near the path as well, and the National Parks Service is getting ready to host big crowds of expectant visitors.

WARNING: Because the Sun’s disk won’t be completely covered, you’ll need to take careful precautions when attempting to view the ring or any phase of the partial eclipse. Looking at the Sun with your bare eyes, or with an inadequate filter, can permanently damage your vision.