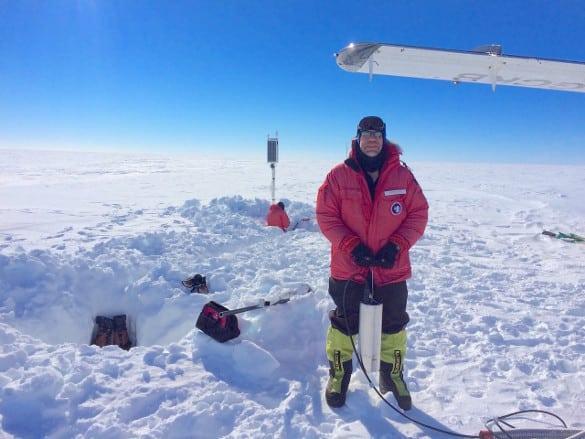 Study co-author Rick Aster during a station installation trip on the Ross Ice Shelf, holding a broadband seismometer. These sensitive sensors were buried at depths of two meters (6 feet) to record micro-scale seismic motions of the ice shelf in three dimensions over the course of two years. Courtesy/Rick Aster. 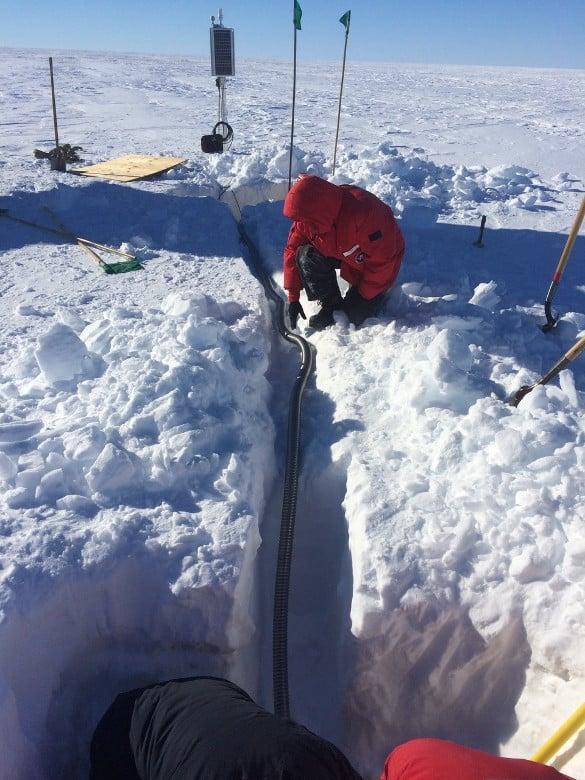 Researchers lay the conduit that connects the seismometer to the solar power system (background) and recording components at a Ross Ice Shelf seismic station. Courtesy/Rick Aster

WASHINGTON, D.C. — Winds blowing across snow dunes on Antarctica’s Ross Ice Shelf cause the massive ice slab’s surface to vibrate, producing a near-constant set of seismic “tones” scientists could potentially use to monitor changes in the ice shelf from afar, according to new research.

The Ross Ice Shelf is Antarctica’s largest ice shelf, a Texas-sized plate of glacial ice fed from the icy continent’s interior that floats atop the Southern Ocean. The ice shelf buttresses adjacent ice sheets on Antarctica’s mainland, impeding ice flow from land into water, like a cork in a bottle.

When ice shelves collapse, ice can flow faster from land into the sea, which can raise sea levels. Ice shelves all over Antarctica have been thinning, and in some cases breaking up or retreating, due to rising ocean and air temperatures. Prior observations have shown that Antarctic ice shelves can collapse suddenly and without obvious warning signs, which happened when the Larsen B ice shelf on the Antarctic Peninsula abruptly collapsed in 2002.

To better understand the physical properties of the Ross Ice Shelf, researchers buried 34 extremely sensitive seismic sensors under its snowy surface. The sensors allowed the researchers to monitor the ice shelf’s vibrations and study its structure and movements for over two years, from late 2014 to early 2017.

Ice shelves are covered in thick blankets of snow, often several meters deep, that are topped with massive snow dunes, like sand dunes in a desert. This snow layer acts like a fur coat for the underlying ice, insulating the ice below from heating and even melting when temperatures rise.

When the researchers started analyzing seismic data on the Ross Ice Shelf, they noticed something odd: Its fur coat was almost constantly vibrating.

When they looked closer at the data, they discovered winds whipping across the massive snow dunes caused the ice sheet’s snow covering to rumble, like the pounding of a colossal drum. Listen to the ice sheet’s “song” here.

They also noticed the pitch of this seismic hum changed when weather conditions altered the snow layer’s surface. They found the ice vibrated at different frequencies when strong storms rearranged the snow dunes or when the air temperatures at the surface went up or down, which changed how fast seismic waves traveled through the snow.

“It’s kind of like you’re blowing a flute, constantly, on the ice shelf,” said Julien Chaput, a geophysicist and mathematician at Colorado State University in Fort Collins and lead author of the new study published today in Geophysical Research Letters, a journal of the American Geophysical Union.

Just like musicians can change the pitch of a note on a flute by altering which holes air flows through or how fast it flows, weather conditions on the ice shelf can change the frequency of its vibration by altering its dune-like topography, according to Chaput.

“Either you change the velocity of the snow by heating or cooling it, or you change where you blow on the flute, by adding or destroying dunes,” he said. “And that’s essentially the two forcing effects we can observe.”

The hum is too low in frequency to be audible to human ears, but the new findings suggest scientists could use seismic stations to continuously monitor the conditions on ice shelves in near real-time. Studying the vibrations of an ice shelf’s insulating snow jacket could give scientists a sense of how it is responding to changing climate conditions, according to Douglas MacAyeal, a glaciologist at the University of Chicago who was not connected to the new study but wrote a commentary about the findings also published today in Geophysical Research Letters.

“The response of the ice shelf tells us that we can track extremely sensitive details about it,” Chaput said. “Basically, what we have on our hands is a tool to monitor the environment, really. And its impact on the ice shelf.”