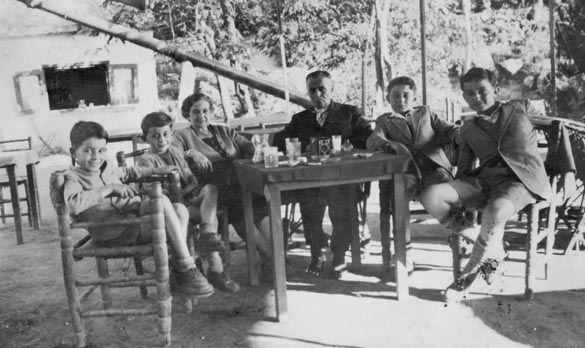 Author Claudette Sutton’s grandparents and their children, on the patio outside their home in Aleppo, around 1946. Courtesy/NM History Museum
NMHM News:
SANTA FE — In conjunction with the current exhibition, “Syria: Cultural Patrimony Under Threat,” on exhibit at the New Mexico History Museum through Nov. 3, 2017, author Claudette Sutton will give a lecture exploring her family’s Syrian roots 2-3:30 p.m. Saturday, Oct. 14.
Claudette Sutton will take you back to a lost place and time: Aleppo, Syria, in the early twentieth century, when her father was growing up in one of the world’s oldest Jewish communities. Her grandfather was a textile merchant with roots in Syria as deep as anyone could trace. Her father attended school in Aleppo with Jewish, Christian and Muslim families who still lived alongside one another with respect as they had for centuries, until rising anti-Semitism in the years before World War II forced the family to find a new home. Through stories and slides, you’ll experience Mike Sutton’s journey from his childhood home in Aleppo, to Shanghai, to skyscraper post-war America.
“Sharing my father’s experience of displacement and re-identification in a new country feels especially poignant at this time when we are seeing staggering numbers of people forced to leave their homes,” Sutton says, “and it provides surprising points of inspiration and resonance with today’s events.”
Shared with a journalist’s eye and a daughter’s love, this is a story that will expand your understanding of Syria’s current war and humanitarian crisis. Following a talk with photos and excerpts from her book, Farewell, Aleppo, Sutton will be joined in conversation by Ron Duncan Hart, author of several books including, most recently, Sephardic Jews, published by Gaon Books.
Claudette Sutton, author of Farewell, Aleppo: My Father, My People, and Their Long Journey Home (Terra Nova Books, 2014), has spoken around the country about Syria’s Jewish history and her family’s emigration from Aleppo to America. She lives with her husband and son in Santa Fe, where she publishes “Tumbleweeds,” Santa Fe’s quarterly parenting newspaper.
Menu
LOS ALAMOS