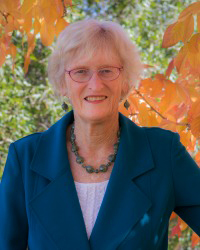 Anne Kimball Davis ’62 remembers arriving at Connecticut College and being told that a liberal arts education gives you the opportunity to do whatever you want in life.

And she should remember. The former teacher, politician, publisher, real estate broker and current Bible scholar is living proof.

“I took those words to heart and, by golly, it’s worked,” says Davis.

Though technically retired, Davis teaches graduate classes in biblical studies at Trinity Southwest University in Albuquerque and is the executive director of BibleInteract, a fellowship of Bible scholars and biblical archaeologists. Davis and her colleagues film their research and lectures and post them on BibleInteract’s website, where they can be streamed online or through set-top boxes like Roku or Apple TV.

This unique teaching strategy allows graduate students all over the world to study at Trinity Southwest without traveling, Davis says, and gives the faculty more time for research.

Davis’s interest in the Bible started later in life, and it quickly became a passion that she describes as “half-spiritual, half-academic.” She has become a leading expert on biblical studies in recent years, regularly appearing on TV and radio programs and authoring four books in the last three years.

Teaching, however, is not new for Davis. With limited options for women in the workforce in the early 60s — “teacher, secretary or nurse,” she says — Davis chose the job she felt provided her the greatest challenge. She would go on to teach in schools in Colorado and California, where she earned her master’s in education from San Diego State University.

Soon after, she married her husband, Hal, and they moved to upstate New York while he worked on a Ph.D. in physics from Cornell. Davis took the opportunity to get involved with local politics, serving on the town council.

The couple then moved to Austin, where Davis founded a small publishing operation. It was then she learned she had a knack for sales — “You could sell an igloo in Alaska,” someone once told her.

After moving to Albuquerque — her husband got a job at Los Alamos National Laboratory — Davis transitioned into a career in real estate. She was a natural, becoming one of the first women in the United States to be certified to sell commercial real estate. Davis retired from real estate in 1996, and began to delve more deeply into her newfound passion for the Bible. She set to work on an additional master’s and graduated with a Ph.D. in biblical studies from Trinity Southwest in 1999.

Still married — for 46 years — still working and still taking advantage of the liberal arts education that has served her well for more than 50 years, Davis practices what she preaches as a professor, putting learning first and foremost.

“I owe all that I’ve achieved to my education, and it’s a privilege to be able to share my knowledge with young minds.”