Angie Charlton Hangs Up Her Scissors After 50 Years 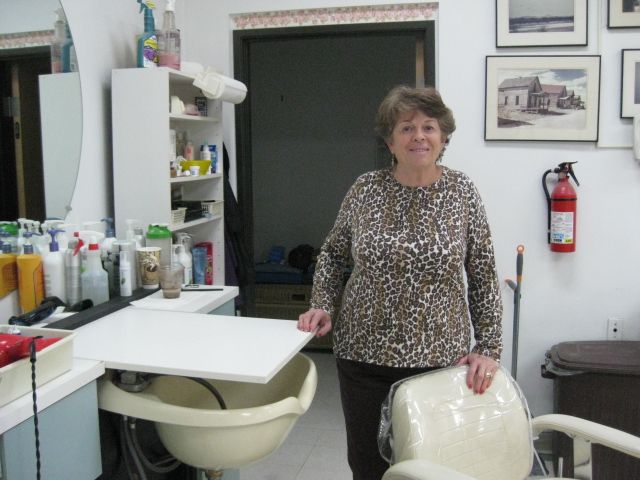 Angie Charlton is retiring after 50 years. Photo by Kirsten Laskey/ladailypost.com

Much like any individual with a natural talent, Angie Charlton exercised her skills as an entrepreneur at an early age.

Charlton recalled when she was in fourth grade she saw a green-and-white two-wheel bicycle in a local store.

Wanting that bike badly, Charlton said she asked her father to get it for her but her dad said no.

If she wanted that bike, she would have to get a job and earn the money to pay for it.

“He put me to the challenge,” she said.

Charlton rose to the challenge by going into the local office of the New Mexican newspaper and asked the office managers if she could have a job. She was given a bunch of newspapers and Charlton set out to the corner of what was at the time Safeway and the Los Alamos Drugstore to sell them. When she sold out, she went back for more.

From then on, she sold newspapers every day and eventually recruited her sister to help out.

This was Charlton’s very first experience as an entrepreneur and it was a success; she and her sister earned enough to buy the bike and share it.

Charlton’s next entrepreneurial undertaking only expanded off of the first one.

She owned and worked at Shear Genius hair salon, located at 143 Central Park Square, for 36 years and has been cutting hair for 50 years.

But it is time to wrap up this business venture as well – Charlton is retiring and will close the doors to her salon on Dec. 1.

She will finish the year at Smart Set Styling Salon, located at 2101 Trinity Dr., Suite B.

While Charlton showed a talent for business as a child, she also exhibited an interest to cut hair at an early age.

And just like today, she worked with hair to provide a beneficial service to the customer.

“When I was very young my sister and brother never had any hair because I was always cutting it,” she joked. Adding her siblings luckily had curly hair which hid her mistakes.

Charlton even tried to help out her brother with school bullies with a hairstyle job. She explained her brother’s hair is a red-copper color, which got him teased at school.

One day, he came home particularly upset because of the name-calling.

“So I said, ‘I’ll fix it,’” Charlton remembered. She pulled out their father’s black shoe polish and painted her brother’s hair black.

“Needless to say I got in big trouble,” she said.

But her interest in hair remained and by high school she was cutting and dyeing her friends’ hair.

Charlton continued her education in as a stylist by attending cosmetology school in 1961 before working in a hair salon at the La Fonda hotel for a year.

In 1963, she met a woman in Santa Fe was opening her own hair salon, Mae Ann Salon, and was offered a job.

Charlton said she worked at Mae Ann Salon for six or seven years and when the woman opened another salon, Charlton worked as the manager for the new store for seven years.

Then, “I decided to branch out on my own,” Charlton said.

“It’s been a really wonderful journey for me because some of my customers who are 50 years old – I started cutting their hair (when they were) in the eighth-grade.

“I’ve been so blessed that this community really supported this business for me,” Charlton said.

She added she and her customers enjoy more family-type relationships than the typical hairstylist and customer dynamic.

One client commented that Charlton was not only a great stylist but also a great psychologist.

She joked she probably knows more about some of them than their families do.

So retiring from her extensive career comes with a mixed bag of emotions. “There’s a bittersweet feeling,” she said; however, “My body is ready.”

“It’s just time for me to move on to the next journey of my life, which is retirement.”

What makes it tough is leaving her customers, which Charlton said “are gems.”

In all her time serving Los Alamos, Charlton said she feels she gotten far more than she has given.

But she does offer some advice to her fellow business owners trying to make it in Los Alamos. She acknowledges that times have changed and the economy has changed. While Los Alamos has managed in the past to dodge any affects of the country’s recessions, it is feeling those affects now.

Still, “We’re in retail and in the service (industry) and you have to be there for the customer,” she said.

This not only means showing up when you say you are going to show up but also being trustworthy.

With a new journey ahead of her, Charlton said she is looking forward to having more time to do the things she loves – which includes gardening and being involved with her church, the Church of Christ.

Although there is much to look forward to, Charlton said she will miss her work family. “I’m going to miss everybody – how could I not?”