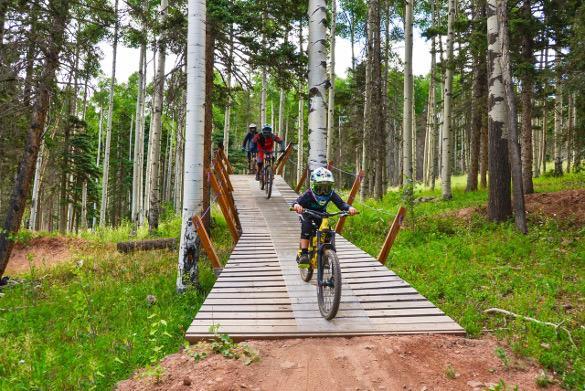 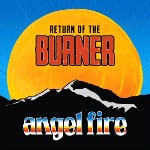 AFBP News:
ANGEL FIRE ― Awarded #1 Bike Park in the Southwest by MTBParks.com, Angel Fire Bike Park, the largest bike park in the Rockies, has opened for the summer season and has plenty of races, improvements and expansions in the works this year.
After record-setting late winter storms, the bike park officially kicked off its season with 60 miles of trails in the park and more than 40 miles in the surrounding village of Angel Fire.
The additional late snow is creating a different type of riding trail.
“With such fantastic snow conditions this season, it’s now left our amazing ‘Cacao Pow’ dirt trails super moist which makes for ideal riding conditions,” said Angel Fire Bike Park Manager Patrick West.
On tap this summer is the Return of the Burner, a 12-hour endurance mountain biking race, slated for June 22, in conjunction with the summer solstice. After a nearly 10-year hiatus, the Burner endurance gravity race returns to Angel Fire Bike Park to challenge the strongest riders in the area with the longest and largest downhill race of the summer.
The original Angel Fire Burner event ran for two years and was the inspiration to what later developed into the Red Bull Final Descent Series. There will be single-racer and team categories with varying amounts of runs that competitors must finish to complete the event. Every racer will compete for the same number of laps specific to the category, and the first one to complete the specified runs will be crowned the winner.
To register or for more information: https://www.bikereg.com/return-of-the-burner
Additionally, Angel Fire Bike Park has purchased another excavator allowing them to have a dedicated trail development team throughout the summer. Plans include adding a few more miles of riding in the Bike Park on the mountain, as well as expanding and improvements to the Greenbelt system of trails throughout the Village of Angel Fire. The greenbelt trail system is a free-access group of trails within the valley of Angel Fire that is open to non-motorized traffic including cross country mountain biking, running, hiking, and horseback riding.
“While we’re known for our technical, expert downhill trails we have been working the last few seasons on developing more beginner downhill green trails, as well as adding to our easy-riding trails throughout the valley,” West explained. “We have so many families that visit us in summer we want to make sure that every level of riding – from beginner to the hardcore downhill rider – has a great experience here in Angel Fire. We’re excited about our top-secret new green and blue trail system we’re calling Mac & Cheese. This new system will offer some of the best trails for adults and children of all riding ability.”
Angel Fire Bike Park will also be hosting their annualFire 5 Downhill races this season. Presentedby Schwalbe, these three premiere downhill races puts cash and prizes up for grabs. Back this season will be the Lil’ Shredders category,for kids 12 and under.
Additionally, this season, Angel Fire Bike Park is redesigning several of its green trails, including “Easy Street,” to create more relaxed riding for kids as young as 6. The park has also added a fleet of Specialized Turbo Levo E-Bikes, which offers riders a full suspension mountain bike with electric power that provides riders with pedaling assistance. Unlike other bike parks, E-Bikes are allowed on all mountain and cross-country village trails since the land is all privately owned.
“We’re known as the most family-friendly resort in the southwest, so we want to make sure we’re offering the best in mountain biking for the very young,” Greg Ralph, marketing director, Angel Fire Resort, explains. “Along with easier and expanded XC trail riding throughout the village of Angel Fire, we’re also making sure that beginners have a fun selection of downhill trails they can safely learn the sport on.”
Angel Fire Bike Park also is offering a special deal for any Spider Mountain Bike Park ticket holders. Present a single day Spider Mountain Bike Park ticket for 50% off a single day pass at Angel Fire Bike Park. Spider Mountain Bike Park season pass holders can receive up to three days at the discounted price.
Angel Fire Bike Park is also offering its riders some additional riding gear perks. Guests will be able to demoa new fleet of bikes from Commencial, Giant, Specialized, GT, Trek, Evil, as well as, the latest gear from Fox and Troy Lee Designs. 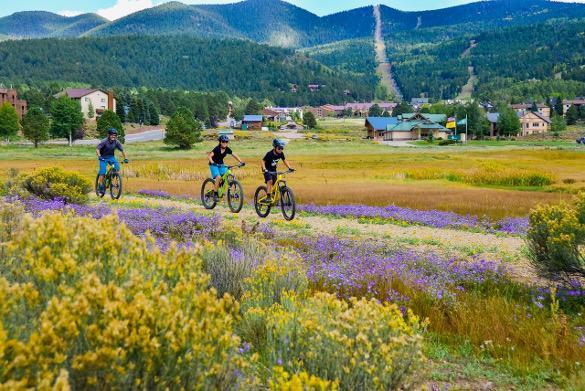 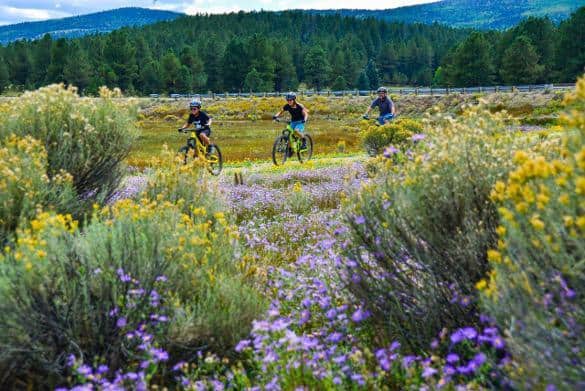 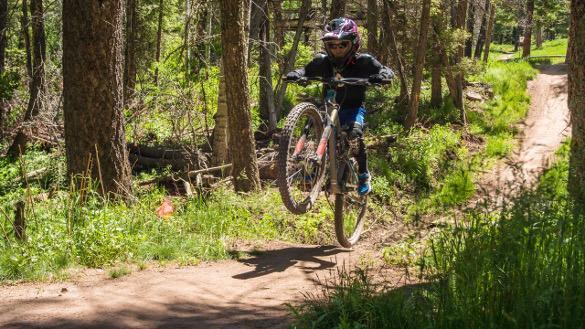