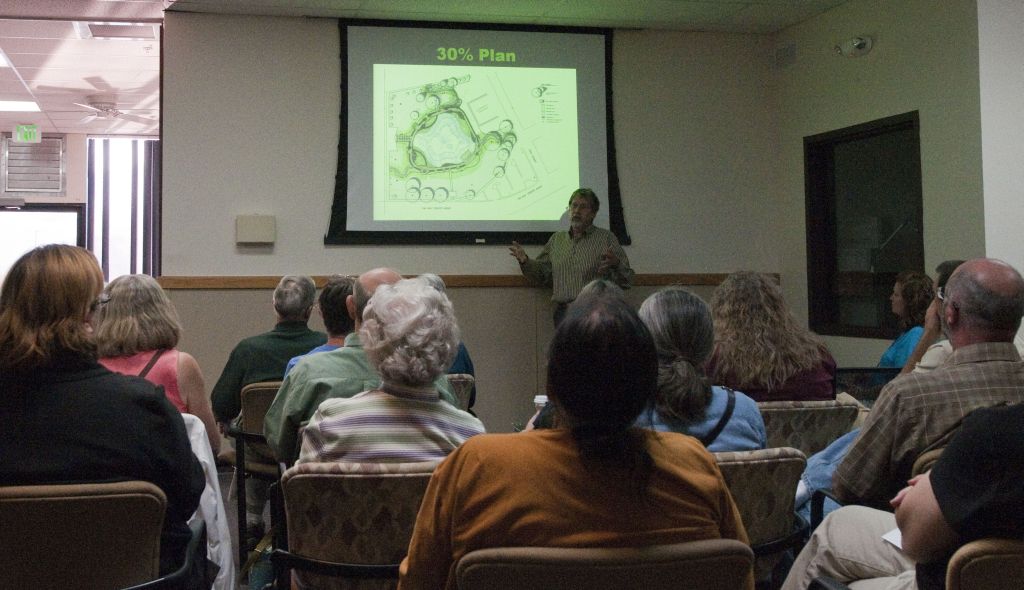 George Padnovich of Sites Southwest reviews the 30 percent design plan for the Ashley Pond Park project during a  public meeting Thursday in the Community Building. Photo by Greg Kendall/ladailypost.com

About 26 members of the public gathered at a meeting Thursday, Sept. 20 in the Community Building at 20th Street and Central Avenue to learn more about upcoming improvements to Ashley Pond Park.

The meeting announcement stated that improvements to Ashley Pond Park are coming soon and that the project is “currently at the 30 percent design stage, with plans to complete design this fall and begin construction next February.”

It became quickly apparent that many members of the public gathered for the meeting thought an opportunity remained to make major changes to the overall project design. A second confusing issue was how much of the park was included in the project.

County Council candidate Kristin Henderson was vocal about her desire to have the stage stay on the northwest side of the pond.

“This allows dancing and views of the mountains. That’s where me and my friends like to be,” she said.

Several members of the public expressed a desire to have the stage completely removed from the project or remain on the northwest side of the pond where concerts are held today.

Other suggestions made during the meeting were to combine the two wetland areas into one and to eliminate the boardwalks.

A resident expressed frustration to the Los Alamos Daily Post that too often the County becomes entangled by the “last minute analysis paralysis” at both the resident and County Council level.

There were differing opinions about the adequacy of notification for the many public meetings held to discuss the Ashley Pond Park project before it was approved by Council.

George Padnovich of Sites Southwest, Los Alamos County Parks Division Manager Dick McIntyre and Community Services Director Charlie Kalogeros-Chattan explained to those present Thursday that Council had already approved the basic project design, which includes a stage over the southeast side of the pond, the project scope, budget and schedule.

Both the CIP Committee and Parks & Recreation Board also approved the project scope and design. Any substantial changes would mean going back to Council, which would delay the completion of the project.

There were at minimum, six well-publicized public meetings leading up to approval by the CIP Committee, Parks & Recreation Board and County Council.

Kalogeros-Chattan also clarified that the current site of the Gordons’ Concerts on the northwest area of the Park near the Justice Center and County portables, is not included in the project scope or funding.

Any changes to that area would be determined in the future, most likely after the portables are no longer in use, she said.

Padnovich said the new stage area is a natural acoustic bowl and the wetlands and pond would be “a beautiful back drop.”

The $2.2 million project will include installation of a new bulkhead, new sidewalks, making water quality and storm water/drainage improvements, ADA access improvements, new contouring of the Pond, boardwalks, a water feature and concert stage with removable cover at the southeast corner of the pond.

Council also requested consideration for including a sound system for the stage. The ducks and geese will be removed during construction and returned upon completion. 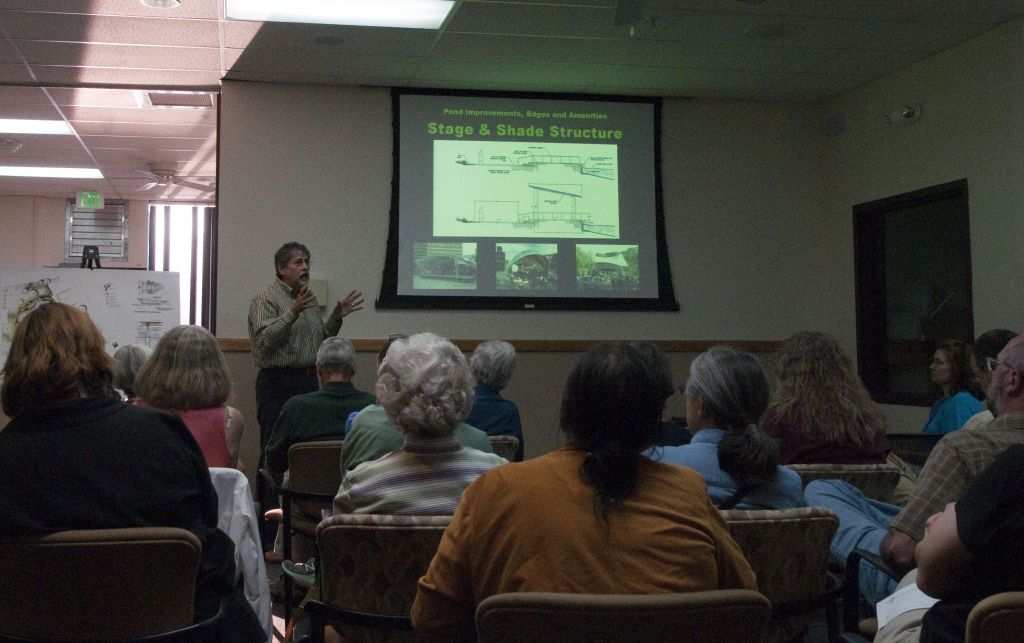 The majority of public comments at Thursday’s meeting centered around a permanent stage for Ashley Pond Park. Photo by Greg Kendall/ladailypost.com

A concern of engineers is that the pond is in the early stages of eutrophication – a depletion of oxygen in the water. The causes of eutrophication are overabundant fish population, limited circulation and inadequate recirculation of water, limited introduction of fresh water and pollutants conveyed by the collection of storm water runoff.

Plans call for water levels of eight to 12 inches at the low end and up to two feet in the wetland area. At deepest, pond water levels will reach eight to 10 feet toward the center.

Three aerators will be installed in the bottom of the pond at a depth of 10 feet, rather than the existing above surface water feature aerator.

A waterfall feature will provide additional aeration and will drain into the pond. A clay lining will be place along the bottom of the pond. The pump station will remain in its current location.

Bass and trout will be introduced into the pond. The goal is to create a healthy pond and water system, officials said.

Another request from the audience was an increase of shade at the Park. McIntyre’s crews will come in after the project is complete and populate the park with more trees including along Trinity Drive. 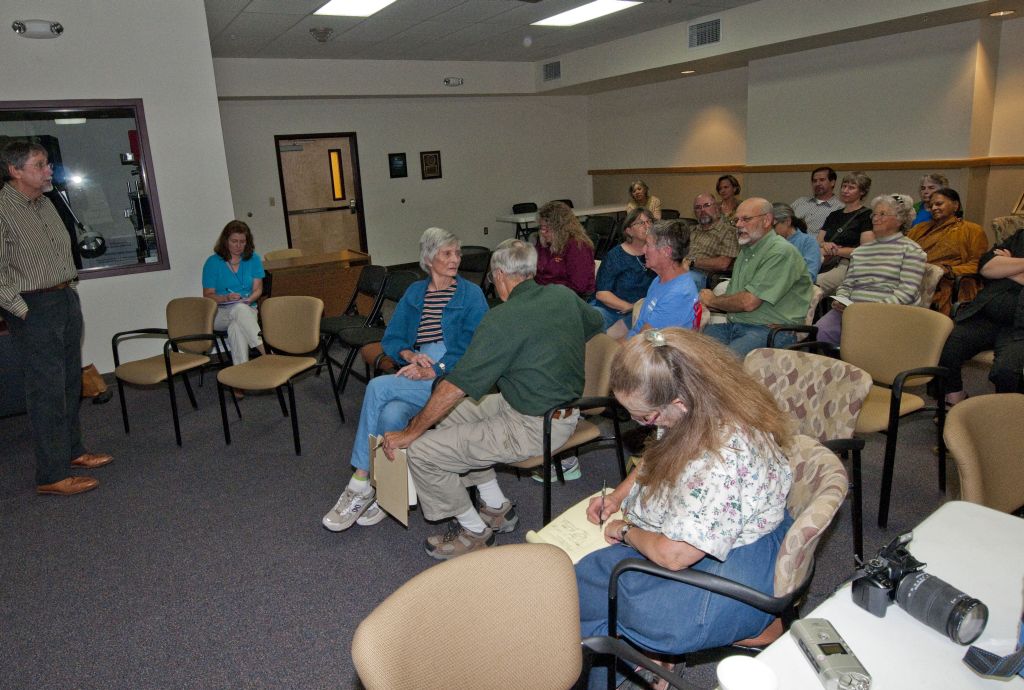 The County’s Summer Concert Series Promoter  Russ Gordon spoke with the Los Alamos Daily Post about the new design for the pond and the proposed permenant stage location.

“I am very happy with the park design. It will be gorgeous.” Gordon said, adding that he is not thrilled with the removable stage cover, but understands it is a requirement of the Historic District. Gordon said that he will be happy if the stage is built anywhere at the pond.

He also said that 2012 was a top summer concert season for the County. “We are thrilled with it. People love when the concerts are at the pond. This year concert attendance doubled over the prior year,” Gordon said.

Restrooms should be part of the overall plan for Ashley Pond Park regardless of whether concerts are held there, he said. Another change Gordon said that he would like to see is a redesign of the area directly in front of the stage to ensure that people can still circle the pond on the walkway during concerts. The County is considering this change.

The plan is to drain and dredge the pond beginning in February 2013. Gordon said that he is already thinking about a concert to coincide with the Aug. 15, 2013 planned completion and grand re-opening of the Park. 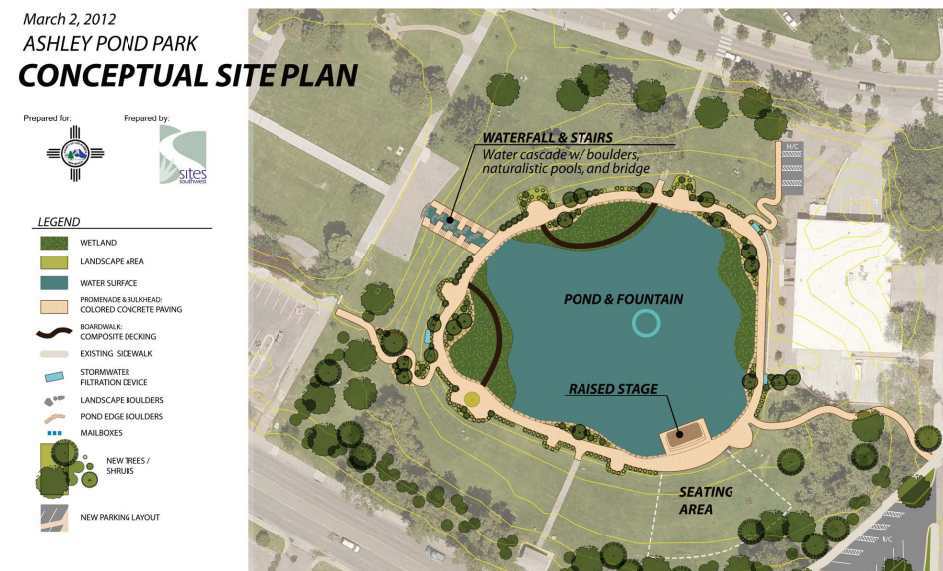 To view the power point presentation click HERE. For additional information, questions or comments, please contact Richard McIntyre, Project Manager, at 662-8159 or e-mail him at richard.mcintyre@lacmn.us. 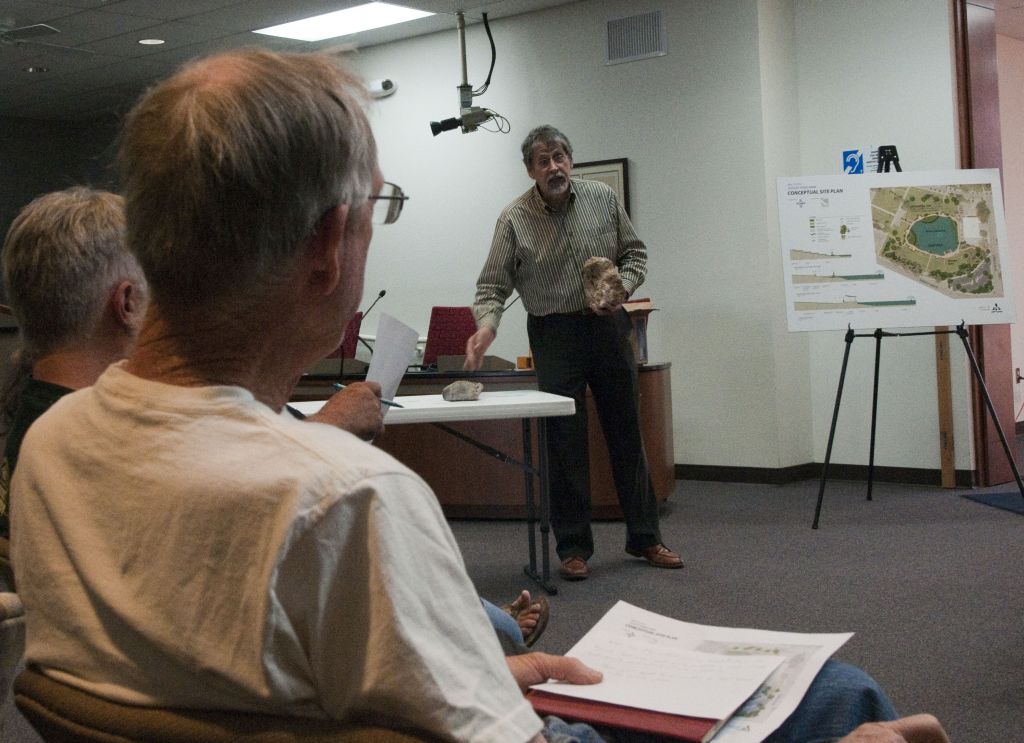 George Padnovich of Sites Southwest displays the rocks to be placed along the edge of the pond. Photo by Greg Kendall/ladailypost.com