ANALYSIS: Law And Disorder In The Unruly State Of New Mexico 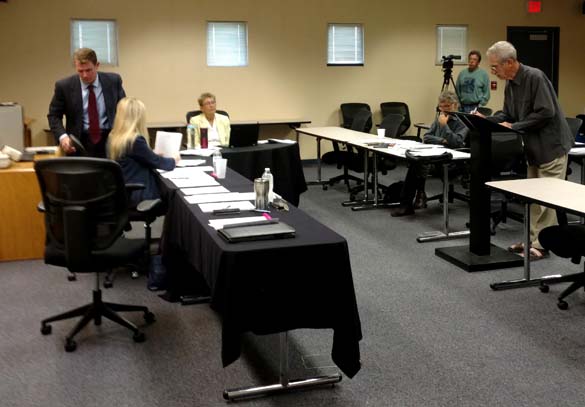 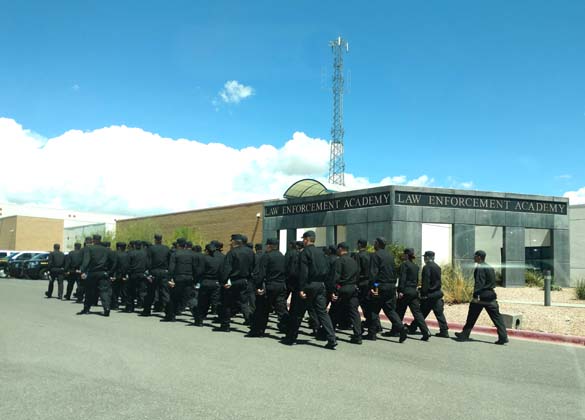 Police students march in formation Tuesday at the Law Enforcement Academy. Photo by Roger Snodgrass
By ROGER SNODGRASS
Los Alamos Daily Post
A meeting Tuesday in Santa Fe solicited public comments on rules changes related to the New Mexico Law Enforcement Academy, but the hearing may have to be done over because procedures did not follow existing rules and were made up on the spot, according to a key participant. As the meeting began, Chris Mechels, a retired lab employee who used to work as a supercomputer troubleshooter, declared that the board that sets the standards and oversees training for New Mexico police officers was operating without a valid process for a regulatory hearing.

Mechels, who volunteers much of his time to public advocacy, said the hearing was improperly noticed. He acknowledged that notice had been published 24 days in advance, by the New Mexico Administrative Code requires an advance notice to be published in an authorized newspaper 30 days before the meeting.

Mechels describes himself as “having some background with the law,” based on his involvement in a number of legal and procedural issues at Los Alamos National Laboratory and several years of volunteer work with a landlord-tenant hotline in Santa Fe. He has been attending the Law Enforcement Academy Board meetings since 2014, when he came to express his concerns about the November 2013 killing of Jeanette Anaya in Santa Fe by State Police Officer Oliver Wilson. At that point, he had traced what he considered the problem of police violence in the state to a pattern of impunity provided by District Attorneys who tended to influence Grand Juries to drop criminal charges in cases involving polices officers.

As he gathered more information about the irregularities and questionable practices in the Anaya case, Mechels began looking for the root causes of the rapid rise of police killings and incidents involving police “abuse of force” in New Mexico. As is often the case, these kinds of roots and their entanglements tend to be routinely undisclosed to the public. Increasingly, Mechels has turned his attention to the agency responsible for certifying police officers and the decision-making practices of its governing board.

Mechels said he found that a number of the problems seemed to be related to issues involving changes in police training policies and standards at the Law Enforcement Academy, dating back to about 2013.  Many of his comments at this week’s hearing warned that the existing program was illegal and may in fact mean that the more than 1,100 police officers who have been improperly certified since then are operating without valid certification and may be open to legal challenge.

Efforts to reform the academy since then have routinely skirted state administrative procedures, according to Mechels, while imposing an agenda that has encouraged the use of force, reduced competency requirements and discriminated against women through inequitable physical requirements. In 2013, then-Secretary of the Public Safety Department Gorden Eden pitched a set of changes to the Law Enforce Academy Board as cleaning out inconsistencies and outmoded requirements, while encouraging a new agenda developed by former LEA Director Jim Jones with minimal public input. “All we are asking is that you look at the minimum things that need to be taught, the minimum amount of curriculum that needs to be taught to make a person a well-rounded basic trained police officer,” Eden said to the board, according to the minutes of a Sept. 9, 2013 meeting.

Based on his independent findings, Mechels has already introduced one lawsuit against the board for what he considers illegal changes to the police academy training curriculum, illicit largely because of inadequate public participation and aggravated by refusals to provide public records according to the law.

“You don’t make up the rules and put them in the code,” Mechels said. “You follow the code to make the rules that then become part of the code.”

The assertion that the meeting was called in accordance with the rules came from the Director of the Law Enforcement Academy Stephan Marshall. When Mechels asked the NMLEA board member and Hearing Officer Elizabeth Miller if he could question Marshall, she conferred with the board’s attorney Joseph Dworak and then denied the request.

Board counsel Dworak declined “to open a dialogue” on that objection. “For the record, this is not a meeting,” he said. “It’s a hearing, because we’re not here as a quorum of any public body.” He added, “I’ll just go ahead and rule on the inadmissibility of that.”

Shortly afterward, as Mechels introduced his first exhibit, Dworak’s answer to Mechel’s previous request for an independent hearing officer and a description of the hearing format, Dworak was reminded that the witness needed to be sworn in, another provision that had not been specified in the process.

Mechels protested another impromptu piece of procedure, but then agreed to be sworn in – “under protest.” Along with reviewing the new proposed changes illuminated by a public process that encouraged and welcomed public involvement and feedback, he also offered much suggestion about conflicting standards among the multitude of state agencies that he believes have had counterproductive and unnecessarily fatal effects in the use of force, and unrestricted pursuit policies.

At the LEA Board meeting in Farming in June, Mechels called the board’s attention to a very high profile example of its tolerance for inconsistencies. This was a high profile matter related to the tragic kidnap and murder of 11-year-old Ashlynne Mike on the Navajo Reservation in early May. As it happened, her disappearance was not announced by Amber Alert until the day after her disappearance. Looking at the content of the state police procedure for the Amber Alert, Mechels discovered “some serious inconsistencies” with the State law, which made it more restrictive than state law and thus prevented timely use of the alert.

“And I’ve been saying this over and over to this Board,” Mechels said at that time. “You need to address these inconsistent policies because people are getting hurt and killed as a result…”

Meanwhile, the meeting in Santa Fe proceeded under a cloud of uncertainty and one dogged person’s informed disapproval.

Other than the LEA director’s claim to have met the requirements for a public meeting, Mechels was the only witness to speak.