‘Amelie’ Wins You Over With Whimsical Sweetness 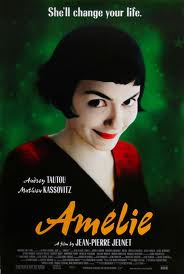 The next film in the library’s Free Film Series, while not technically holiday themed, is so buttery rich and honeyed that it belongs in The Nutcracker’s Land of Sweets.

“Amelie” (2001, rated R for sexuality) tells the life story of Amelie Poulain, beginning with her conception and building to her first cutely quixotic attempt at romantic love.

Amelie has a horrible, but hilariously summarized, childhood. In part because of a mistaken and of course symbolic diagnosis of a heart defect, and in part because of her parents’ undemonstrative caretaking, she does not get out much. In lieu of forming real relationships and experiences, she lives extravagantly in her head.

However, as an adult (played by Audrey Tautou), she finds, in a rather unlikely place, inspiration to reach out to a three-dimensional human. Once Amelie discovers the rewards of kindness, it becomes a serious hobby.

She has a gift for sussing out how best and most simply to help someone without his or her even knowing. A well-placed quote, a well-timed VHS recording – sometimes it does not take much, beyond creativity, to bring someone back to life. But Amelie’s true passion involves far more excess. Her fascination with surreptitious problem-solving, only a stepping stone, evolves into the silliest, most lavish and most fanciful flirting ever filmed.

I remember watching “Amelie” soon after it was released, when I was about her age. I mostly thought it was quaint and cute, and I felt irritated by the close-ups of Tautou’s adorable mug. But re-watching it now, I love the way the story is told, its quick succession of striking details, its complete lack of sentimentality, its refusal to fall back on the easy, manipulative tropes I see in almost every romantic comedy.

Life and love are as unique and interesting as we are. “Amelie” reminds me that I create my own story; therefore, nothing matters more than imagination.

“Amelie” screens at 6:30 p.m. Thursday, Jan. 2, at Mesa Public Library as part of the library’s Free Film Series. The Free Film Series presents a movie the first Thursday of nearly every month, thanks to the Friends of Los Alamos County Libraries. For more information, call 505.662.8240.