Ambassador Linton Brooks Speaks On The World Following The Demise Of US–Russia Arms Control At UNM In Albuquerque Oct. 2 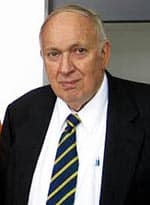 For fifty years the nuclear balance between the United States and the Soviet Union/Russia has been regulated by a series of bi-lateral treaties and agreements culminating in the current New START Treaty.  This era is about to end, perhaps as soon as 2021 and certainly no later than 2026.

Its demise results from persistent violations of an earlier treaty on Intermediate Range Nuclear Forces.

How will the end of arms control affect U.S. national security and strategic stability between Russia and the United States? What will we lose and what can be done to mitigate that loss?

Ambassador Brooks has six decades of national security experience including negotiating the START I and START II treaties in the early 1990s. A former Administrator of the National Nuclear Security Administration, he now consults on nuclear issues and serves on the Board of Managers for Sandia National Laboratories.

Note: There is still time to register online at http://www.abqinternational.org/the-world-following-the-demise-of-us-russia-arms-control/ or pay by check or cash at the door. Lecture: $15/Albuquerque International Association Members, $25/Non-Members; Students (under 30) with ID – Free.