Amateur Naturalist: What Is Happening To The Birds Of Los Alamos? 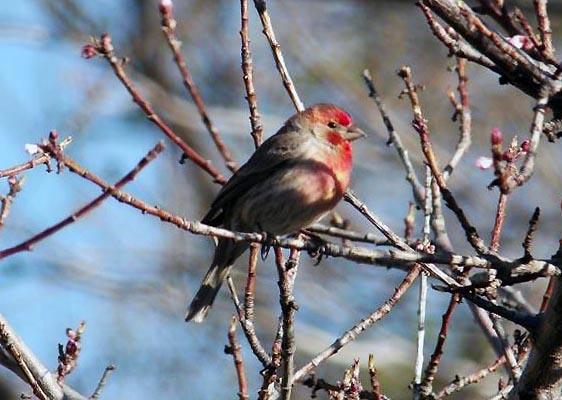 House finches are among the most commonly seen birds in Los Alamos. But will they continue to be abundant? Will another species become more common, or will all species decrease or increase in numbers? Photo by Robert Dryja 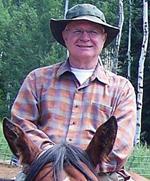 Bird populations in Los Alamos have been studied in different ways. One way has involved monitoring birds in a piñon/juniper habitat over a 10-year time period from 2003 to 2013. The goal has been to evaluate what has happened to the total number of birds and the number of species. This has involved comparing birds in thinned and un-thinned, still forested, areas. What happens to birds when conifer forests are displaced by thinning as well as draught with bark beetle infestations?

A second way has involved monitoring birds that are breeding throughout out the county. This excludes birds passing through the county as part of their fall or spring migrations. The breeding birds are species that remain all year or for the summer. Does the number of breeding species vary with the kind of terrain? This has involved five years of data collection from 1984 through 1988.

A third way has involved monitoring bird feeders throughout the county. The monitoring is for all birds, transient or permanent for the year. Data is collected continuously for six months of the year when birds are leaving/staying/returning over a winter season. How is the number and variety of birds changing during a season and from year to year? Twenty nine years of data has been collected since 1989 and still is continuing.

Each approach has its particular goals:

The number of bird species varies with each study. The in-depth piñon/juniper habitat analysis found 59 species. The breeding bird study identified 112 species throughout the county. Ninety five species have been identified at bird feeders over the years. There are 22 species that are common to these three kinds of studies.

The breeding bird study shows a pattern in which the greatest number of bird species occurs at lower elevation in the piñon/juniper forest habitat. Species decrease as elevation increases from 6,000 feet at the Rio Grande to 10,000 feet at the mountain peaks. The number of species decreases from 21 to seven species for six habitats of increasing elevation. This data was gathered before the forest fires and the thinning that occurred thereafter. It is consistent with the results of the piñon/juniper habitat study. An unburnt and un-thinned habitat area supports more bird species.

The studies together identify several factors that can work together or against one another:

TABLE A shows that three species were seen 60 or more times during the 10 years in the un-thinned areas while no species occurred with such frequency in the thinned areas.

TABLE A: Distribution of bird species based in how often observed in un-thinned and thinned areas over 10 years 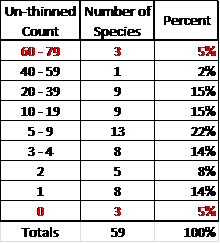 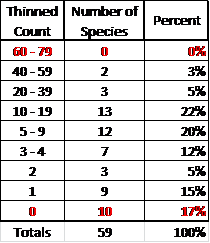 CHART A shows the frequency counts of 95 species reported by Feeder Watch from 1989 to 2018, or 29 years. A few species are commonly seen while the great majority is seen less frequently.

The data in these studies represent snapshots at a point in time or as a cumulative end point. However, what has happened from year-to-year? Are there patterns of good and bad years? We had seen in a previous article that crow populations increased the year after the forest fires in 2000 and 2011 and have been increasing for several years during draught conditions. What other patterns may be occurring for other species? We will explore year-to-year patterns and variations in coming articles. 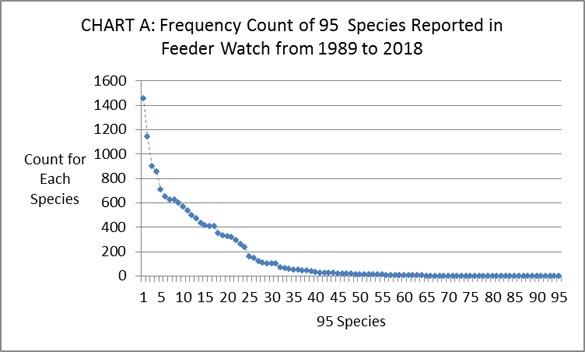 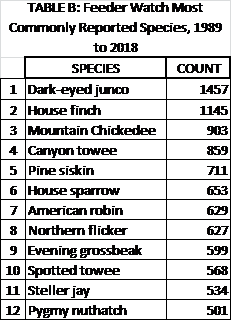