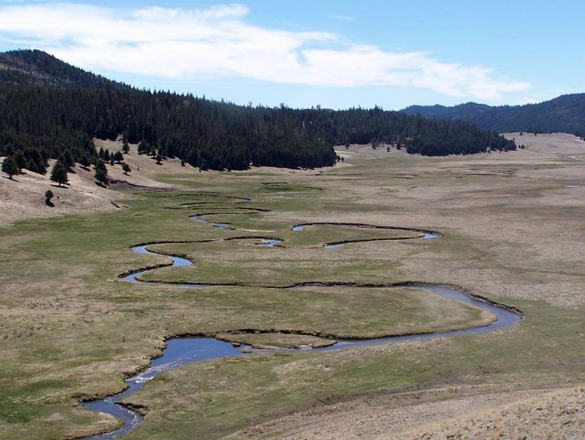 Streams form meanders when they cross the broad level valleys of the Valles Caldera. Photo by Robert Dryja

PEEC Amateur Naturalist: Two streams of the Valles Caldera
By Robert Dryja
The streams of the Valles Caldera share similar characteristics but also have their differences. The East Fork of the Jemez River and the Rito de los Indios (Rito) are two examples of similarities and differences. The East Fork is the major stream for the southern side of the Valles Caldera, flowing across the Valle Grande. The San Antonio is the major stream for the northern side of the Valles Caldera. The Rito flows into it from the northern rim of the Valles Caldera.
Rain water and snow melt are absorbed into the ground of the volcanic rim and the mountain domes in the Valles Caldera. The water then slowly percolates downslope and accumulates to become part of an underground reservoir. It may take centuries to reach the lower elevations where it eventually emerges from springs. The springs provide a steady supply of water throughout the year.
The Valle Grande is shaped like a broad bowl that is up to five miles across. The East Fork immediately develops a series of meanders as it emerges from its springs. It slowly crosses the Valle Grande in a series of “s” curves until enters a small canyon. It then changes into a rocky brook. The Rito does just the opposite. It starts as a bubbling, rocky brook high up on the western side of Cerro Toledo. It changes into a meandering stream when it reaches the San Antonio valley.
Although the East Fork and the Rito emerge from springs, the springs themselves are different from one another. The springs of the East Fork start as a series of connected ponds. The water is clear and upwellings can be seen pushing to the surface. Numerous trout swim back and forth along the length of the ponds or hide beneath the overhanging grasses that grow along the shore line. Small springs also are located a short distance away from the ponds and connect to them via channels.
The Rito in contrast starts from a single spring at the upper end of a canyon that extends down from the rim of the Valles Caldera. The spring is at the base of a felsenmeer and immediately spreads out over a field of rock. It then comes together into a single channel that continues down the canyon.
A felsenmeer is composed of a field broken rock that can be several feet deep. Ice from a prior winter can remain sheltered under the rock and spend the next summer melting. This helps explain the coldness of the water. Ground water from further up the mountain also may be contributing to the flow from the spring.
There are two small rivulets that join with the much larger spring at the felsenmeer. These rivulets are only about foot wide and each extends for about a mile further upstream before petering out. A surprise is waiting at one of the rivulets close to the felsenmeer spring. A small and long abandoned cabin is located here. It has one single room with the frames for two bunk beds in it. There are two log-fired stoves in the room. Perhaps one stove was used for heating while the other was used for cooking.
The Rito flows in a canyon created by the western side of Cerro Toledo. Unlike the Cerros Del Abrigo, the western side of the Cerro Toledo has not been affected as adversely by logging or the Las Conchas forest fire. Various kinds of conifer cover the mountain depending upon the elevation. The Las Conchas forest fire in 2011 burned for the most part at a low intensity in the area where the forest transitions to the grassy meadowland.
The Rito is at its largest while flowing along a rocky channel through the surrounding forest. However it then becomes narrower and smaller as it approaches the bottom of the canyon where an increasingly wider meadow develops. The Rito becomes more of a marsh with several vague meandering channels when it is about to join with the San Antonio creek. The East Fork in contrast continues to grow in size as it crosses the Valle Grande, thanks to more and more springs feeding into it.
Interested in visiting the springs of these two streams? The Valle Grande hiking trail provides access to the springs of the East Fork. A person will descend through the forest for a mile on the Valle Grande trail and then hike for another mile across the grasslands of the Valle Grande to the East Fork springs. The Rito trail follows a forest road for about three miles from its start along the Valle San Antonio. There is a gentle two and half mile ascent along the hiking trail to the spring at the felsenmeer. 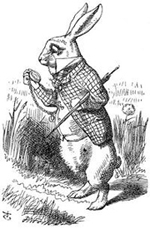 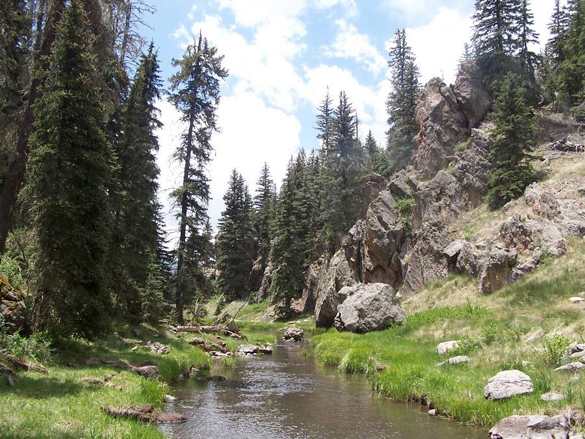 The East Fork becomes a rocky brook when it leaves the Valle Grande. Photo by Robert Dryja 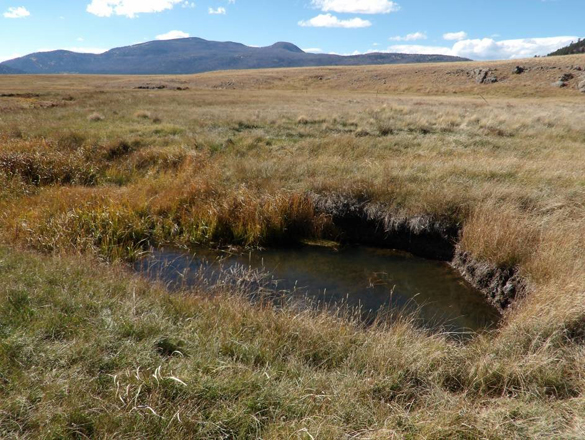 The first pond created by a spring at the headwaters of the East Fork. Photo by Robert Dryja 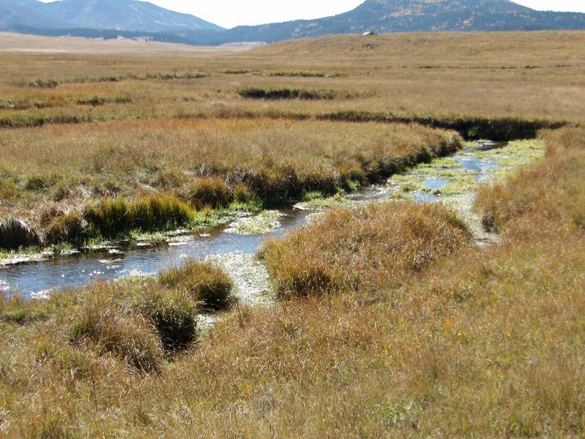 Smaller springs create channels to a large spring which is a part of the East Fork. Photo by Robert Dryja 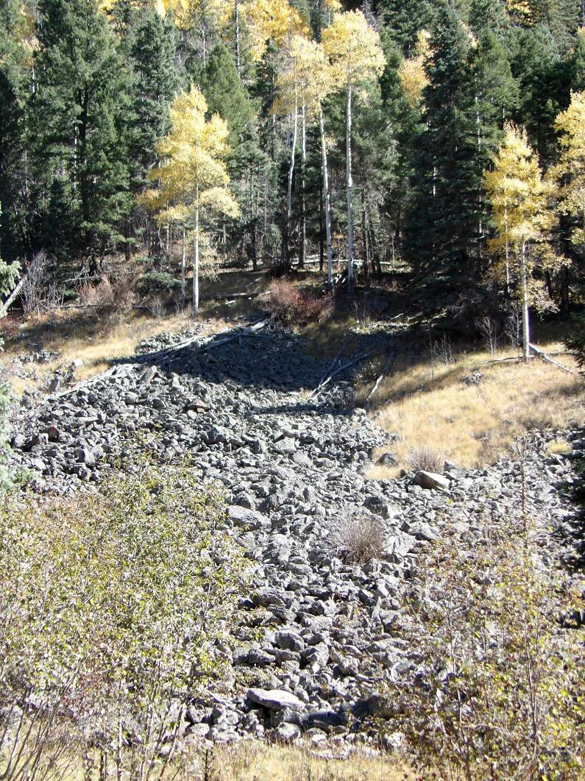 A spring flows from the base of a felsenmeer at the headwaters of the Rito. Photo by Robert Dryja 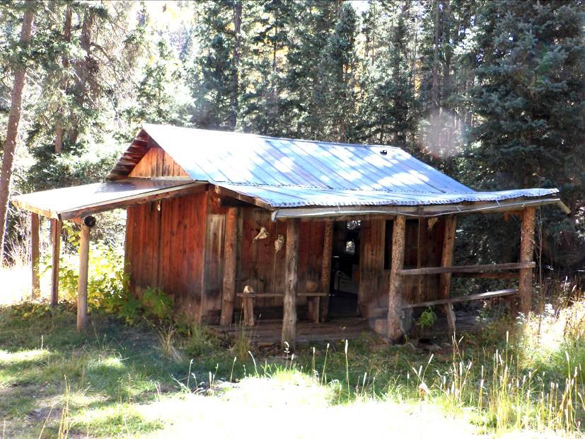 An abandoned cabin adjacent to a rivulet and close to the felsenmeer spring. Photo by Robert Dryja 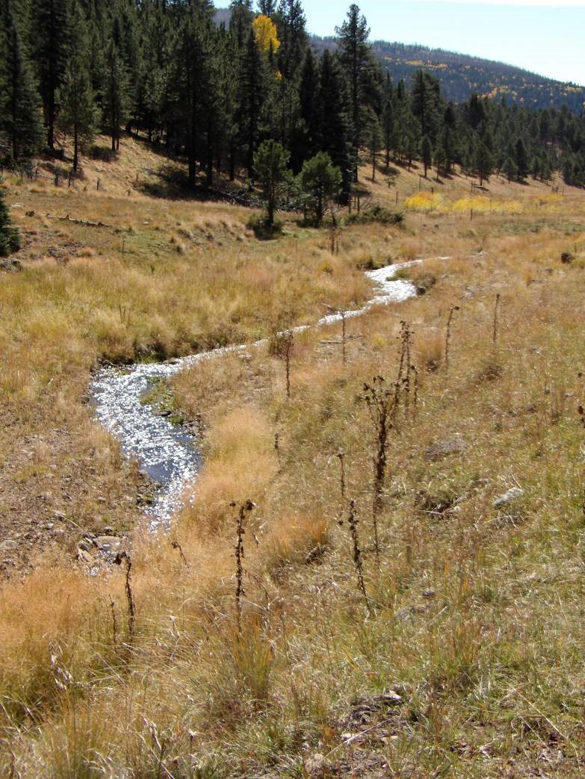