Amateur Naturalist: Summer Solstice … What Is Happening To The Birds 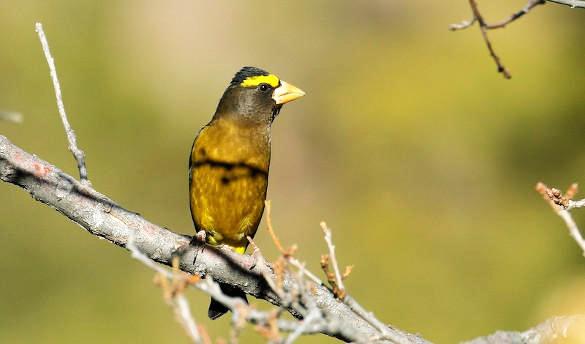 The Evening Grosbeak: The most adaptable species for the varying habitats of Los Alamos has resulted in it being the most commonly seen. Photo by Bob Walker
A House Sparrow and a fledgling: The efforts of a parent bird may help their numbers increase in coming years. Photo by Bob Walker
Amateur Naturalist
By ROBERT DRYJA
We have been considering in previous columns what has been happening to the birds of Los Alamos County.
This has involved reviewing the distribution of breeding species in different habitats and what has been the trend in their numbers for year to year since 1989.
There are been three overall patterns among the habitats, whether at lower elevations toward the Rio Grande or higher elevations up the mountains. The more common species have become even more common over the years while the less common species have become less common. However there is a time period between 2000 and 2012 when there is a reversal of these two trends. This reversal may be the result of forest fires at the beginning and end of this time period as well draughts during this time.
Conditions may have become more favorable for the less common species, resulting in their increase.
The long days occur during the time of summer solstice together with a hike to see birds provides another way to appreciate the various species and their habitats. The sun rises over the eastern mountains at about 5:40 a.m. Summer has begun and the morning temperature provides for a pleasant early morning hike. Since this is New Mexico, it is likely to be sunny all day.
The melting snow from winter and a few spring rain showers this year have been favorable for plants.
Trees and shrubs have had two months for growth. “Green” is the symbolic color for this year’s solstice, thanks to all of the leaves now covering the trees. Sun beams pass horizontally when the sun just rises.
Green Leaves shine brightly on the side of trees facing the sun while other side still is in darkness.
A house sparrow is chirping constantly during this hike. Its feathers are fluffed up and it skips around a short distance away. It acts as if wants me to come toward it. It then flies to a nearby bush, and continues its chirping, encouraging me to follow it. What is going on? The preceding two months of plant growth provide a clue. There is a nest hidden somewhere nearby and a young fledgling is leaving the nest.
Sure enough, there is movement down in some grass. The fledgling cannot yet fly proficiently and is fluttering in the grass, attempting to take off. The behavior of the parent house sparrow is meant to distract me away the fledgling. This is a good strategy to distract a cat or another predator.
A parent and a fledgling will be added to the count that has been made by bird watchers over the years.
Only 48 house sparrows have be reported for the past four years. Thanks to the efforts of a parent to protect its young, the count will increase to at least 50 when this year’s count is included. This is a mathematical increase of 4.2 percent. The actual observation of a parent protecting its young among green leaves puts a bit more meaning on this number.
Now let us consider the trends for fifty two species for the whole county, rather than habitat by habitat.
Chart A shows that ten species represent the more commonly seen. The Evening grosbeak has been the most commonly seen over the twenty nine years with nearly 1,800 being counted. The European Starling is the tenth member of this group with over 500 seen. In contrast there are 42 species in which less than 500 are counted for each species. Stated differently, an average of about 50 to 60 birds are seen annually for each of the most common species. In contrast 25 or fewer birds typically are seen annually for each of the less common species.
Chart B divides the 52 species into two groups. The ten more commonly seen species have increased significantly since 2007. Approximately 500 to1,000 have been seen annually in recent years. In contrast approximately 100 to 200 were seen annually prior to 2007. The more commonly seen species therefore have become even more common over the years. This is the same pattern that occurred for individual habitats as discussed in prior articles.
There are 42 species in the less commonly seen group. There is a slow increase in the annual count from about 25 to 150. The less commonly seen species therefore have increased in annual numbers as well. However this increase is not as dramatic when compared to the more commonly seen species.
There also is considerable variation from this pattern when considered habitat by habitat as reviewed in prior articles.
The climatic temperatures of mountains appear to be increasing even than overall global temperatures.
The mountains may become more like grasslands and juniper/scrub oak in coming decades as result of episodic forest fires, draughts, and temperature change. The expansive forests of tall pines and conifers may be passing for Los Alamos county. What kinds of species of birds then will occur? Are patterns of the past twenty years an indication of what is to come?
Environmental conditions have become even more favorable for the more common species in recent years. Data from the Cornell Ornithology FeederWatch program.
Menu
Los Alamos
88°
Fair
5:49am8:25pm MDT
Feels like: 88°F
Wind: 13mph WSW
Humidity: 7%
Pressure: 30.16"Hg
UV index: 3
WedThuFri
90/63°F
82/61°F
84/61°F
Weather forecast Los Alamos, New Mexico ▸