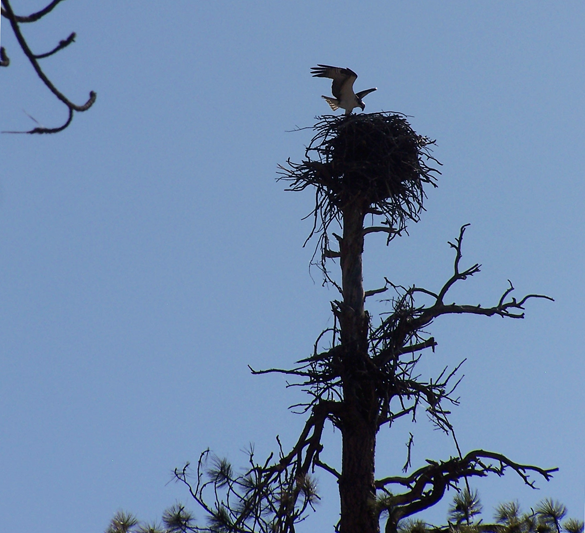 An osprey parent flying from its nest. Photo by Robert Dryja

We are fortunate in that Fenton Lake is not too distant from Los Alamos. It is the home of a nesting pair of Ospreys. Ospreys have been reported there regularly since 1989.

Ospreys are a fish eating species of eagle and Fenton Lake provides one source of fish. The nearby Seven Springs Fish Hatchery had been a second source. The fish hatchery has long narrow breeding tanks where trout are raised. An osprey simply had to swoop along the length of a tank to pick up a trout. This easy source of food lasted until fencing was built along the sides of the tanks so that ospreys no longer could fly at the water surface of a tank.

Instead, ospreys can be seen circling over Fenton Lake and plunging to it surface. They are attracted to fishermen. A fisherman may bring a fish to the surface, possibly providing an easy meal to pick up. The light shining from a fishing line appears to attract them even more. A fisherman out on the lake may look up to see an osprey circling above his head.

There are several tall ponderosa pine trees near the road side at the entrance to Fenton Lake. One tree has an osprey nest at its very top. The two parents alternate between remaining at the nest or flying to Fenton Lake in search of a meal. It is an impressive sight to watch one of these large birds landing or leaving the nest. 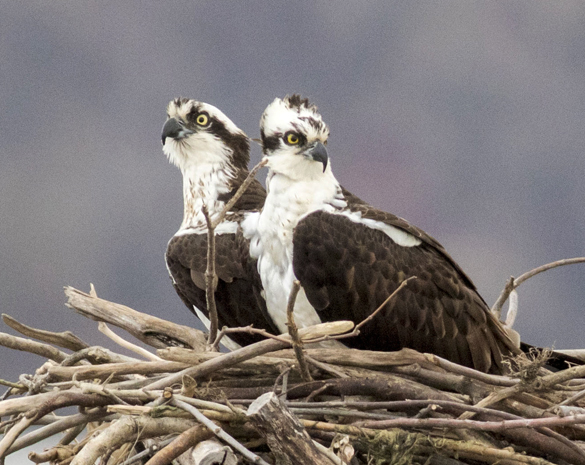 Adults on their nest. Photo by Mouser Williams

A fisherman can gain an appreciation of the wilderness while fishing and watching the ospreys. However there is the potential for an unexpected catastrophe. What could go wrong while fishing? A fishing line can kill an osprey. A fishing line may be cut off and abandoned when the hook become tangled on a branch or stuck at the lake bottom. A fish later becomes caught by the abandoned hook and an osprey captures the fish. The osprey may then become entangled in the line while returning with the fish to its nest. 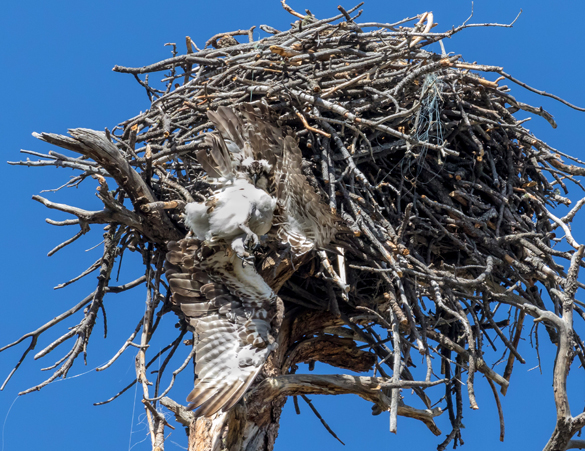 An osprey hangs from its nest, strangled by the fishing line it brought with it. Photo by Hawks Aloft

This is what happened to one of the ospreys at Fenton Lake. A rescue effort by Hawks Aloft could not reach the osprey. The nest was so high in the tree that the crane could not reach it. This loss also affected the nestlings. Could the other remaining parent bring enough food for them? We will need to wait until next summer to see if a new pair of ospreys comes to Fenton Lake.

The fisherman probably was annoyed when he needed to cut his tangled fishing line and did not imagine that an osprey could become entangled in it. Some additional effort to retrieve the line perhaps may have avoided the resulting accident. 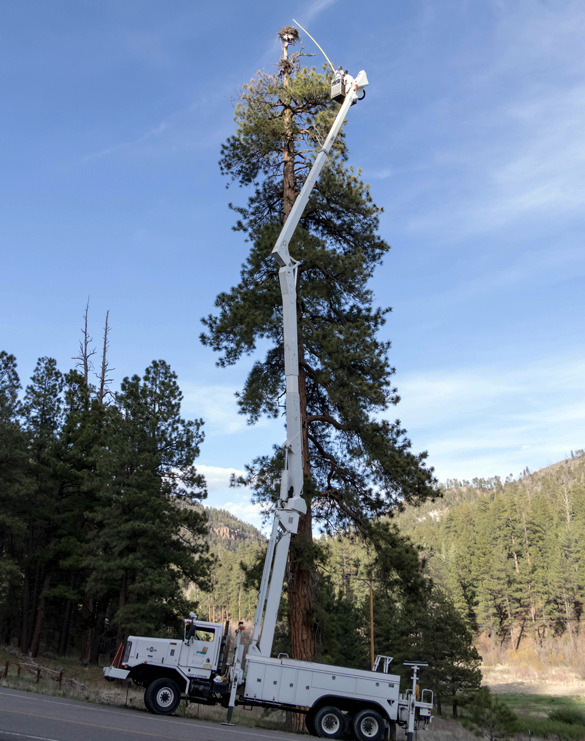 A rescue attempt of an entangled osprey. Photo by Hawks Aloft