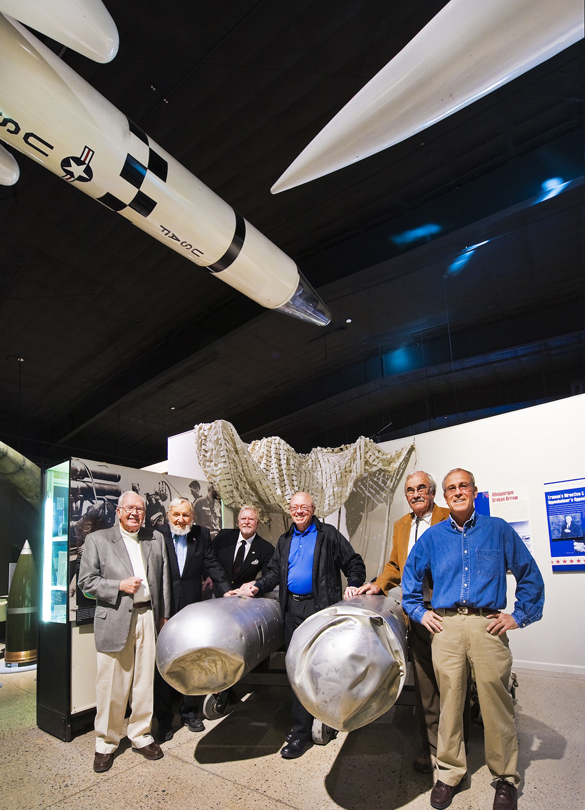 Six active and retired Sandia National Laboratories employees gathered in 2011 at the National Museum of Nuclear Science & History in Albuquerque around two B28 gravity bombs recovered from a 1966 nuclear accident. Photo by Randy Montoya
By Web Wire

Sandia National Laboratories’ documentary, Always/Never: The Quest for Safety, Control & Survivability, showcases rare historical footage and interviews with a wide range of experts to describe how national security laboratories improved the safety and security of nuclear weapons from the dawn of the nuclear age to the end of the Cold War.

After World War II, U.S. policymakers decided the nation would rely heavily on nuclear weapons as an essential strategic deterrent. At the same time, they wanted assurances that weapons in the stockpile would always work if called upon but would never detonate as the result of accident, equipment failure, human mistake or malicious intent — hence the title of the film.

Nuclear weapons must work in extremely complex and often harsh environments. While they could remain dormant for decades, they must be available immediately at the president’s command.

Always/Never by Sandia filmmaker Dan Curry documents Sandia’s crucial role with wide-ranging interviews that tell the story from many viewpoints, including the military, academics, other laboratories and those who oppose nuclear weapons.

Among those interviewed are the late former Defense secretaries Robert McNamara and James Schlesinger; Bruce Blair, co-founder of Global Zero, which seeks to eliminate nuclear weapons; and Stanford University senior fellow Scott Sagan, author of The Limits of Safety: Organizations, Accidents, and Nuclear Weapons. More than a dozen active and retired Sandia designers and engineers also recount their stories for the camera, many for the first time publicly.

“We decided to place Sandia’s achievements alongside those of Los Alamos and Livermore national laboratories. Additionally, those achievements had to be placed in the context of a much larger historical framework, one shaped by NATO and U.S. policy and military operations, international politics and world events,” said Curry, who spent years gathering on-camera interviews with dozens of key players in nuclear policy.

The nuclear weapons history told in the film spans 1945-1991 and examines the geopolitical events of the Cold War and how those events drove the history of nuclear weapon design and engineering.

Always/Never tells the story of the push and pull between nuclear policy, technology and operations. While the Eisenhower administration shared nuclear weapons with NATO allies, for example, the Kennedy administration wanted greater assurance that they could be used only with presidential consent.

Sandia developed Permission Action Links (PALs) as a practical solution to improve presidential control. PALS, as an engineered barrier to prevent an unauthorized person who obtained access to a nuclear weapon from being able to use it, made a major contribution to global security.

“It’s important to preserve this history for generations without the experience of living through WWII or the Cold War,” said Deputy Laboratories Director and EVP for National Security Programs Steve Rottler. “Exploring key aspects of the past interaction between technology, military requirements and national policy may contribute to a better understanding of what it will take to sustain the nation’s nuclear deterrent in an uncertain future. This film captures the history that drove the development of a science-based philosophy, set of principles and structured engineering approach for assuring the safety, security and reliability of U.S. nuclear weapons. Our commitment to the Always/Never paradigm still pervades Sandia today.”