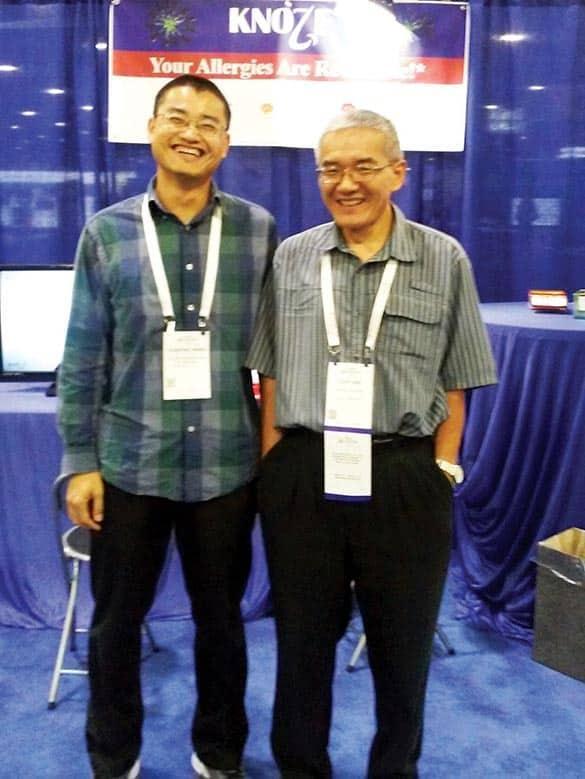 BUSINESS News:
Knoze Jr. (https://knozejr.com/) recently launched a line of natural, prebiotic lollipops, AllerPops, engineered by biologist Cliff Han to help allergy sufferers combat the yearly allergy season.
Using his expertise and experience as a biologist, Han’s prebiotic candy uses the science behind prebiotics (substances that encourage beneficial-bacterial growth) to promote the body to fight allergies naturally. Han recently began touring the United States, taking his prebiotic solution for allergies to doctors and medical labs everywhere.
AllerPops is a patented formula of natural food ingredients (sugars, amino acids and nutrients) that stimulate growth of beneficial bacteria. AllerPops works based on the scientific premise of the immune-streponella relationship. Streponella is an amalgam term given to a group of harmless, gentle bacteria that normally lives in the mouth and respiratory tract. These bacteria usually work in partnership with the immune system to keep the body in equilibrium.
Over time, the levels of streponella can be reduced by use of antibiotics, mouth washes and other oral hygiene methods. Without natural levels of streponella to help keep the immune system in balance, allergy-causing agents (allergens) can ignite difficult and painful immune responses commonly called allergies. The use of allergy medicines, although helpful in extreme cases, often come with a host of irritating and painful side effects. AllerPops produce a balanced immune state that is not sensitive to allergens and stable over a long term, with almost no side effects.
Allergies generally occur whenever the human immune system reacts to allergens. Allergens vary, but common types include pollen, insect venoms, pet dander or certain types of food. Sometimes the immune system creates antibodies that identify those allergens as harmful, even though they are not.
When the body then comes in contact with those same allergens, the immune system reacts as if it had been invaded by a harmful substance: reactions can inflame the skin, sinuses, constrict airways or affect the digestive system. The length and severity of these allergic responses vary from person to person, but certain individuals can have life-threatening reactions called anaphylaxis. AllerPops helps restore oral probiotics, the natural force to calm the immune system, to halt the immune reactions to allergens. This mechanism is not allergen-specific. Therefore AllerPops can relieve seasonal/yearlong allergies due to many different allergens.
Reception for AllerPops has been overwhelmingly positive. “Before, I was taking multiple medications — a pill at night, and in the morning, I’d take some more. The problem with that was it was making me groggy all-day long. I’ve been taking medications for about 30 years … the difference between AllerPops and the medication is the side effects … with the Knoze. Jr. lollipops, I had no side effects. That’s a huge difference, plus, my allergies are completely gone.”
Listen to other real testimonials from allergy sufferers and learn more about AllerPops at: https://www.youtube.com/watch?time_continue=2&v=wY7UZ19eX2o.
About Knoze Jr. and AllerPops
AllerPops from Knoze Jr. is a product developed by Cliff Han. A trained physician in China, Han later worked in the Los Alamos National Laboratory for two decades as a biologist. Suffering from personal, debilitating allergies, Han decided to craft the perfect natural solution: an easy-to-eat lollipop that contains a mixture of prebiotics which encourage healthy flora growth in the body. Using the same logic that fuels the current probiotics food trend of yogurts and smoothies, Han’s patented allergy candy facilitates the growth of the body’s own natural flora; thus encouraging the delicate balance of microorganisms which can help ameliorate allergic reactions. Learn more about Knoze Jr. and AllerPops at Knozejr.com.
Menu
LOS ALAMOS