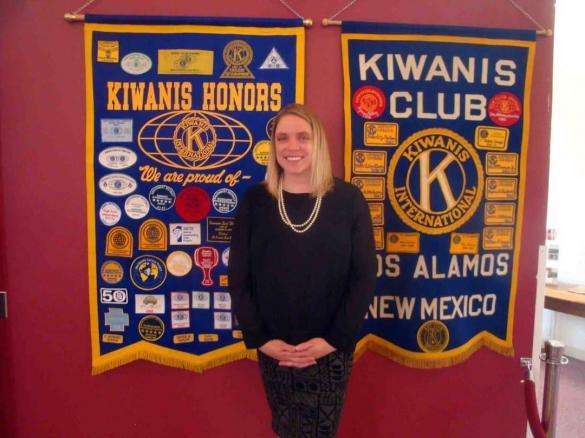 Attorney Elizabeth Allen, a Democrat is running for municipal judge and spoke recently to Kiwanis members. Photo by Don Casperson 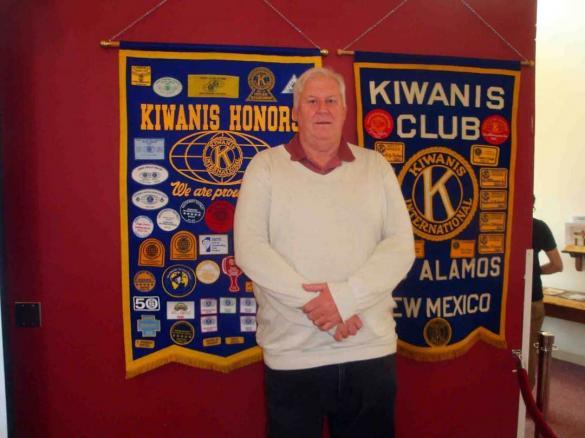 The two candidates for municipal judge in Los Alamos, Elizabeth Allen, a Democrat, and Alan Kirk, a Republican and the incumbent, recently spoke at Kiwanis Club meeting.

Probate Judge Anne Nobile, a Democrat and unopposed candidate seeking re-election, also was invited to come and speak, but was unable to attend. Quentin David Dimick, a Democrat running for County Council, was given an opportunity to come and speak because he had been ill when the other Democrats for council came to speak. However, he missed this meeting, too.

Allen and Kirk were each given five minutes to address their qualifications and experience, their reason for deciding to run, and the goals they will try to achieve if elected. The candidates were allowed to decide how to use the five minutes and which questions to emphasize. On this day, their approaches were very different.

In a quick drawing, Kiwanis decided that Elizabeth K. Allen, a Democrat, would go first.

She told about the impact that the destruction of the two towers on 9-11 had on her life and her dedication to public service. She was a college student on a campus of approximately 40,000 students when the attack occurred. She recalled silence in the halls and people crying as they watched TV reports showing the two airplanes striking the towers.

Because of those memories, she said, “I wanted to be able to do something to understand this, to give back.” She changed her college major to political science, and eventually, she went to Pepperdine University School of Law in Los Angeles and became an attorney.

One of her earliest jobs was as a prosecutor, and many of her cases involved domestic violence. In one such case, the defendant, charged with attacking a woman, said, “’Yeah, but she broke the TV.” Allen determined that an audio of the incident existed—and that it revealed nothing about the alleged breaking of the TV.

However, she said, “The judge wouldn’t let me show the audio.” He said it had been a long, hard day, she said, and he was tired….

“I lost,” she said, and she felt “despair,” but she continued to work.

She changed her specialty and became a defense attorney, handling many cases involving children, and many appeals. She said she regularly looked through the record “to see if anyone (had) made a mistake”—and she learned a lot.

Her literature shows that here in Los Alamos, she has served on many boards—the Juvenile Justice Advisory Board, the Driving While Intoxicated Board, the board of the Pajarito Environmental Education Center, and the Lodgers’ Tax Advisory Board.

Over the years, she has been an adjunct professor in business/criminal law; a teen court coordinator; a contract public defender; a deputy prosecutor; and an intern in the 10th Circuit Court.

“You can be part of the community,” she said, “and you can make a change.” Her literature says, “I am committed to serving our community in my legal work and my personal life. I want to bring that same dedication to the Municipal Court. I value the safety and security of Los Alamos and believe everyone deserves to be treated fairly and respectfully when appearing in court.”

She still wants to give back, she said. It always comes back to 9-11.

Alan Kirk, a Republican, emphasized—both in his presentation and in his literature—that he has an extensive knowledge and understanding of the Los Alamos community, and vast experience in both police and judicial work.

“I grew up here,” he said. “I owned a business; had a Q clearance.” He said he understands the stress brought to bear on local people by such things as competing of the Los Alamos National Laboratory contract.

He graduated from Los Alamos High School and holds a bachelor’s degree with a double major in psychology and accounting.

Kirk spent 20 years as an officer in the Los Alamos Police Department, serving 10 years as chief of police before retiring. He has now been on the bench for another 20 years.

He has proven his ability to lead, his literature says, by developing the local Teen Court program; implementing a community service program to assist both Teen Court and Adult Probation; expanding probation services to include a pre-trial release program working with defendants from the Municipal, Magistrate, and District Courts; chairing the Municipal Court Judges Association; and serving as a president of the New Mexico Police Chief Association.

He was one of the founders of the Juvenile Justice Advisory Board (JJAB) and has been its chairman for more than 16 years.

He was an “instrumental force in the building of the Los Alamos Teen Center”; participated in the development of Leadership Los Alamos and served as chairman; graduated from Leadership New Mexico; served on the committee that founded the Family Strengths Network and developed the School of Choice; and coached basketball at Los Alamos High School for 18 years.

In his Municipal Court career, he said, he strives to be “professional, fair, and impartial,” basing his decisions on facts. He tries to think “outside the box” and make the most of his understanding of Los Alamos.

He stressed the importance of educating the public. Most of the people who come before him, he said, “have never been to court before.”

He feels that he has “accomplished a lot” during his years in office. He commented, “We have a safe community. Let’s keep it that way.”