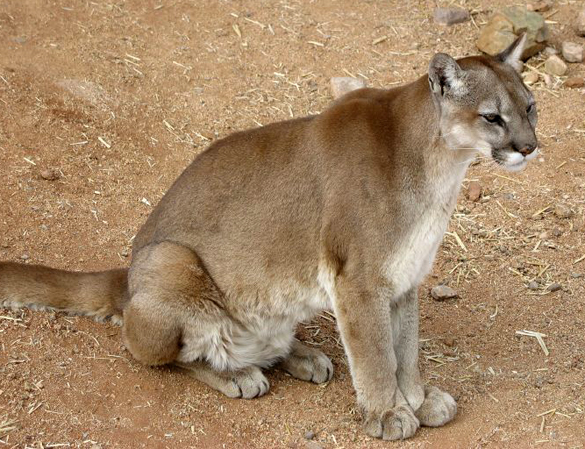 A Los Alamos resident’s Beagle was attacked by a mountain lion in his back yard on Rim Road about 9:30 p.m., Wednesday.

He let his dog out into the yard, saw the dog run charging after something in the bushes, and then heard loud howling. The resident rushed out thinking the dog was attacking a cat or skunk, but when reaching into the bushes to try to separate his dog from the other animal, he touched a mountain lion on the shoulder (full sized) which then, luckily, let go and ran off jumping the front yard fence and heading toward the canyon.

The Beagle is quite injured with puncture wounds. He was taken to the night emergency veterinary service in Santa Fe, is back home now and expected to recover. The resident says it was very scary and he is still trying to mentally recover himself.

Fish and Wildlife indicates that there are a lot of these lions in Los Alamos this year.

The mountain lion has the largest range of any wild land animal in the Americas. Its range spans 110 degrees of latitude, from northern Yukon in Canada to the southern Andes. Its wide distribution stems from its adaptability to virtually every habitat type: it is found in all forest types, as well as in lowland and mountainous deserts. The mountain lion prefers regions with dense underbrush, but can live with little vegetation in open areas. Its preferred habitats include precipitous canyons, escarpments, rim rocks, and dense brush.

Although mountain lions resemble the domestic cat, they are about the same size as an adult human. Due to the expanding human population, cougar ranges increasingly overlap with areas inhabited by humans. Attacks on humans are very rare, as mountain lions prey recognition is a learned behavior and they do not generally recognize humans as prey. Attacks on people, livestock, and pets may occur when a puma habituates to humans or is in a condition of severe starvation. Attacks are most frequent during late spring and summer, when juvenile mountain lion cougars leave their mothers and search for new territory.

Between 1890 and 1990, in North America there were 53 reported, confirmed attacks on humans, resulting in 48 nonfatal injuries and 10 deaths of humans (the total is greater than 53 because some attacks had more than one victim). By 2004, the count had climbed to 88 attacks and 20 deaths.

Within North America, the distribution of attacks is not uniform. The heavily populated state of California has seen a dozen attacks since 1986 (after just three from 1890 to 1985), including three fatalities. Lightly populated New Mexico reported an attack in 2008, the first there since 1974.

As with many predators, a mountain lion may attack if cornered, if a fleeing human stimulates their instinct to chase, or if a person “plays dead”. Standing still however may cause the mountain lion to consider a person easy prey. Exaggerating the threat to the animal through intense eye contact, loud shouting, and any other action to appear larger and more menacing, may make the animal retreat. Fighting back with sticks and rocks, or even bare hands, is often effective in persuading an attacking mountain lion to disengage.

When mountain lions do attack, they usually employ their characteristic neck bite, attempting to position their teeth between the vertebrae and into the spinal cord. Neck, head, and spinal injuries are common and sometimes fatal. Children are at greatest risk of attack, and least likely to survive an encounter. Detailed research into attacks prior to 1991 showed that 64 percent of all victims – and almost all fatalities – were children.

The same study showed the highest proportion of attacks to have occurred in British Columbia, particularly on Vancouver Island where cougar populations are especially dense. Preceding attacks on humans, mountain lions display aberrant behavior, such as activity during daylight hours, a lack of fear of humans, and stalking humans. There have sometimes been incidents of pet mountain lions mauling people.

Research on new wildlife collars may be able to reduce human-animal conflicts by predicting when and where predatory animals hunt. This can not only save human lives and the lives of their pets and livestock but also save these large predatory mammals that are important to the balance of ecosystems.