AHF Meets With Mayors Of Hiroshima And Nagasaki 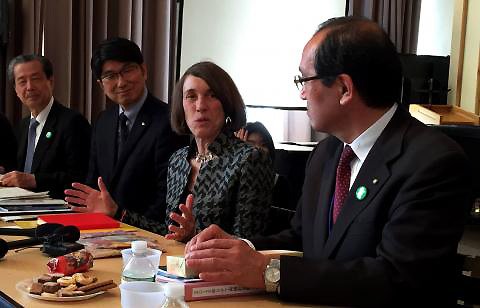 AHF President Cindy Kelly with Mayor Taue, on her right, and Mayor Matsui, on her left. Courtesy/AHF.

The Atomic Heritage Foundation met with the Mayors of Hiroshima and Nagasaki and Japanese local government officials, Friday, May 1, to discuss the interpretation of the new Manhattan Project National Historical Park.

The meeting, which was held at the Institute of International Education at 809 United Nations Plaza in New York City, marked a positive first step in opening a dialogue with the Japanese, whose input will be important to the interpretation of the new park.

The meeting began with opening remarks from Nagasaki Mayor Tomahisa Taue and Hiroshima Mayor Kazumi Matsui, who described the suffering of those affected by the atomic bombing. They expressed hope that interpretation of the new Manhattan Project Park would not end with the dropping of the bomb but also “focus on what happened under the mushroom cloud.”

Representatives from the Japan Confederation of A- and H- bomb Sufferers, the Nagasaki Global Citizens’ Assembly for the Elimination of Nuclear Weapons, and the Hiroshima Peace Culture Foundation also attended the meeting and raised questions about what would be included in the new park.

The Atomic Heritage Foundation heard from several hibakusha, a Japanese term used for surviving victims of the atomic bombings of Hiroshima and Nagasaki.

“I was five years old when the atomic bomb was dropped on Hiroshima,” said Sueichi Kido, assistant secretary of the Japan Confederation of A- and H- bomb Sufferers. “In that moment I thought, ‘This is how the world will end.'” He continued, “We hope that hibakusha are never created again.”

AHF President Cynthia Kelly reassured the mayors and the Japanese delegation that the National Park Service will not “cover-up” the facts or glorify the bomb, as some critics of the park have feared. “The creation of the atomic bomb changed the history of the United States and the world in many ways for good and bad,” Kelly said. “We must consider this history from both an American and international perspective.”

She also expressed confidence in the National Park Service’ s interpretation of other contentious moments in American history, such as Civil War battles at Gettysburg and Antietam and the internment of Japanese-Americans during World War II.

“I am confident the National Park Service will tell the complete and multifaceted history of the Manhattan Project and provide an open-ended interpretation, just like they have done at other sites across the country,” Kelly said.

Mayor Taue and Mr. Kido said they felt “reassured” by the positive discussion and encouraged further dialogue between Japan and the United States. Mayor Taue also invited the Atomic Heritage Foundation to visit Japan to tour the memorials in Hiroshima and Nagasaki.

For more information, see the article in the Japan Times, WWII Park in U.S. to Remain Neutral, and a Tokyo Broadcasting System segment (in Japanese) here.

We are very grateful to Peggy Blumenthal and Jessica Gleason of the Institute for International Education for hosting the conference. Thanks also to David Janes of the United States-Japan Foundation and Alex Wellerstein of the Stevens Institute of Technology for their advice and participation.

In March 2006, the MPHPA’s Board entered into an agreement with the Atomic Heritage Foundation to purchase the assets and continue the mission of the MPHPA.

Since 2006, the Atomic Heritage Foundation has been moving the wealth of information from the MPHPA’s website onto the AHF website. As of April 2015, AHF has succeeded in uploading the majority of profiles, photographs, and other documents to the AHF website. As a result, the MPHPA website, which was extremely old and in danger of being hacked, has been taken down permanently.

We hope you will enjoy the MPHPA’s collections in their new home on the Atomic Heritage Foundation website. We are still in the process of adding some profiles and photos taken from the MPHPA website, but we should have everything up soon. So far we have transferred thousands of profiles of Manhattan Project workers in the Special Engineer Detachment, Provisional Engineer Detachment, Military Police, scientists, and more.

Many thanks to Manhattan Project veteran James A. Schoke for his generous donation to support the transfer of the MPHPA archive to the AHF website.