AGU: Who Is Vulnerable To Tropical Cyclones And Why? 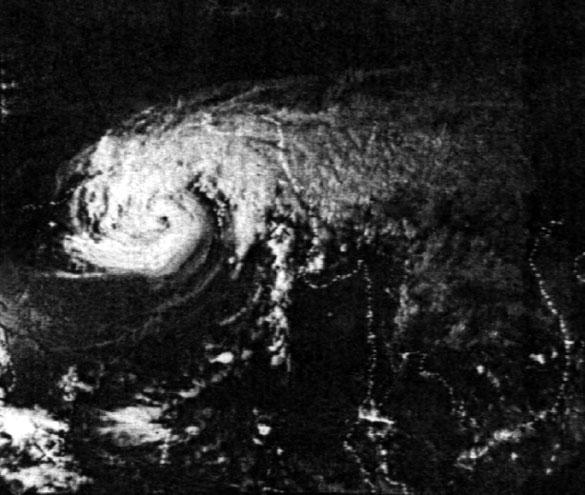 A radar image of the Bhola cyclone, believed to be the deadliest tropical cyclone in world history, which struck Bangladesh Nov. 12, 1970, resulting in upwards of 300,000 deaths. Courtesy/NOAA
AGU News:
Tropical cyclones, and the torrential rains and strong winds these storms bring along with them, threaten coastal communities around the world and are expected to increase in intensity due to climate change. But not every tropical cyclone becomes a natural disaster and not every natural disaster results in human fatalities.
Whether or not a natural hazard, such as a tropical cyclone, becomes a natural disaster depends on whether the hazard overwhelms existing human infrastructure in a particular country or region. But when does a natural disaster result in fatalities?
New research presented at the 2018 American Geophysical Union Fall Meeting in Washington, D.C. suggests that at the country level, how effective the national government is, along with how much exposure to the natural hazard a particular region or community faced, are both important factors in answering this question.
Researchers often use a country’s Gross Domestic Product (GDP) and poverty rates as indicators of tropical cyclone vulnerability and mortality. While these factors are often good proxies for determining vulnerability, they make it difficult to parse out what is actually causing vulnerability and often don’t account for how much exposure to the natural disaster a particular community or region experienced, according to Elizabeth Tennant, a PhD candidate in public policy at the University of Maryland, College Park, and a research associate at Clark University who presented the new findings.
“It’s not just whether or not a country is rich or poor,” Tennant said. “It’s the institutions that are in place.”
In the new study, Tennant created a global dataset of over a thousand storm events from 1978-2005, bridging socioeconomic data, like national government effectiveness, economic development and human capital with meteorological data, like the wind speed and rainfall associated with a particular storm event.
Tennant began by matching up tropical cyclones to a tropical storm, allowing her to model the wind and rainfall conditions of the storm, pinpoint how much exposure certain areas had to the natural disaster and then relate these factors to population and infant mortality data on a subnational scale.
How much exposure an area has to a natural disaster impacts the vulnerability of the region to disaster mortality, so accounting for exposure can help to improve precision and limit bias, according to Tennant.
Tennant then compared how government effectiveness, measured by the World Governance Index – an annual measure of governance around the world done put out by the World Bank – impacts tropical cyclone fatalities. She found countries with more effective governments experience lower mortality rates than those with ineffective governments.
“[The] effect is large, statistically significant,” Tennant said about the finding.
But it’s not just government effectiveness that matters when considering mortality rates. Tennant also found storm fatalities are higher when areas that are already vulnerable face higher exposure to a natural hazard.
This finding may seem like common sense, but most research into mortality occurs at the national scale, erasing how some areas of a country may be more vulnerable than others, Tennant said.
Understanding which areas are exposed to natural hazards due to tropical cyclones could be helpful for formulating new policies to minimize the vulnerability that some areas face, and Tennant hopes that her work could help to further these efforts.
“The same approach can also be applied to looking at other natural hazards, like earthquakes,” Tennant said.
Menu
Los Alamos
77°
Fair
5:49am8:25pm MDT
Feels like: 77°F
Wind: 14mph S
Humidity: 30%
Pressure: 30.25"Hg
UV index: 10
TueWedThu
90/66°F
90/64°F
81/63°F
Weather forecast Los Alamos, New Mexico ▸