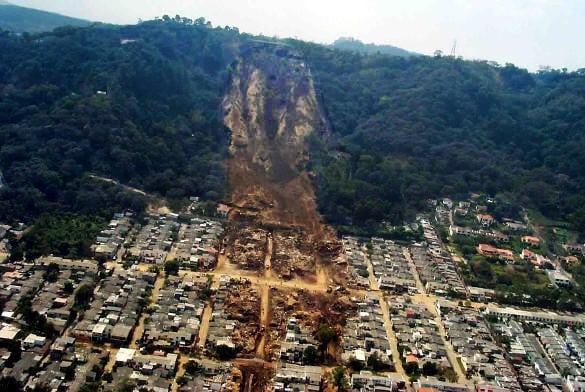 A seismically-induced landslide in El Salvador in 2001. Courtesy/USGS
AGU News:
The 2008 Wenchuan earthquake in Sichuan, China killed tens of thousands of people and left millions homeless. Approximately 20,000 deaths — nearly 30 percent of the total — resulted not from the ground shaking itself but from landslides the quake triggered.
A new model developed by researchers at Indiana University can help experts address such risks by estimating the likelihood of landslides that will be caused by earthquakes anywhere in the world. The estimates can be available within minutes, providing potentially life-saving information to people who are affected by earthquakes and the agencies and organizations charged with responding to them.
“Earthquakes can be devastating, horrific and stressful events,” said Anna Nowicki Jessee, a postdoctoral research fellow in the IU Bloomington Department of Earth and Atmospheric Sciences and lead author of a new study describing the model. “The ultimate goal of this work is that fast, regional estimates of landslide occurrence would provide a way for those who are affected to receive the aid they need more quickly and efficiently.”
A new study describing the model is published in the Journal of Geophysical Research: Earth Surface, a journal of the American Geophysical Union. Based on data from past earthquakes and landslides, the model will be incorporated into the U.S. Geological Survey’s Ground Failure tool, which will be part of the USGS earthquake reporting system.
The model describes a mathematical relationship between where landslides happen and five key variables: how much the ground shook during an earthquake; the steepness of the ground; the type of rock affected; an estimate of how wet the ground is; and what type of land cover is present. The researchers tested multiple versions based on past earthquake-triggered landslides and selected the model with predictions that best matched where landslides occurred.
By entering data for ground shaking for a specific earthquake – available anywhere around the globe from the U.S. Geological Survey ShakeMap tool — scientists will be able to use the model to produce a map showing the probability of landslides in areas near the quake. Available within minutes, the results could provide this information quickly to agencies that provide assistance to affected populations.
Landslides are the third-largest contributor to earthquake deaths, after building collapse and tsunamis. Between 2004 and 2010, earthquake-induced landslides caused an estimated 47,000 deaths. Damaging quakes often occur in remote and mountainous regions with limited transportation and communication networks, where landslides can block roads and impede emergency-response and relief efforts.
“The best part for me,” Jessee said, “is the idea that this product can be used to actually help people who are impacted by landslides caused by earthquakes.”
Menu
Los Alamos
61°
Partly Cloudy
6:54am6:59pm MDT
Feels like: 61°F
Wind: 2mph W
Humidity: 33%
Pressure: 29.97"Hg
UV index: 0
TueWedThu
min 54°F
77/55°F
79/57°F
Weather forecast Los Alamos, New Mexico ▸
Previous
Next