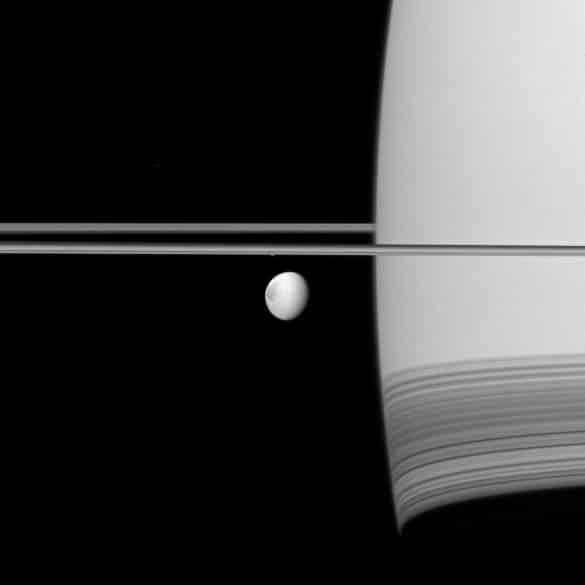 Saturn’s moon Dione coasts along in its orbit appearing in front of its parent planet. Courtesy NASA/JPL-Caltech/Space Science Institute
AGU News:
Strange features on Saturn’s moon Dione resembling lines of latitude on a map could be the result of space dust crashing onto Dione’s surface, according to a new study.
Dione is the fourth-largest of Saturn’s 53 confirmed moons. It has a liquid water ocean covered by an icy shell and a surface marked by craters, fault scarps and recently discovered bright, linear streaks parallel to its equator. The streaks have puzzled scientists because of their orientation and straightness, but a new study in Geophysical Research Letters, a journal of the American Geophysical Union, finds these features, deemed linear virgae, likely originated from low-velocity impacts of space debris from within the Saturn system or beyond.
“I’ve never seen anything this linear anywhere in the solar system,” said Alex Patthoff, a research scientist at the Planetary Science Institute in Tucson, Arizona and co-author of the new study. “You can take a ruler to these images and you can trace them along this perfectly straight line for tens of kilometers or more sometimes. You just don’t see these kinds of things in nature.”
The study’s authors first recognized the features while examining images from NASA’s Cassini probe. Scientists previously assumed the lines were tectonic formations but had not studied them in depth until now.
In the new study, the researchers looked closely at hundreds of Cassini images to identify and analyze the shape and distribution of the linear virgae. The features were largely unobscured by other geologic features. The findings suggest the streaks to be some of the youngest features on the moon and all likely formed around the same time, the study’s authors said.
The authors compiled a list of well-known geological processes, such as rolling boulders or comet impacts, that could create long, linear and narrow structures on the surface of a planetary body. The researchers then compared features produced by each process to Dione’s linear virgae to see which process was supported by the data.
“None of those mechanisms fit,” said Emily Martin, a research scientist at the Center for Earth and Planetary Studies at the National Air and Space Museum of the Smithsonian Institution in Washington D.C. and lead author of the new study. “If they fit the morphology, they didn’t fit the distribution. If they fit the distribution, they didn’t fit the morphology.”
The linear virgae’s shape and unique parallel orientation to the equator made their origin especially difficult to pin down, so to explain the phenomena, the researchers formulated a new hypothesis which fit the bill.
The study’s authors conclude that the linear virgae are likely due to impacts from dust-sized material with low enough mass and velocity to form long and linear streaks while depositing onto Dione’s surface rather than forming craters. The debris could have come from Saturn’s rings or from the two other moons also within Dione’s orbit. Material could have also come from somewhere outside the Saturnian system and passed close to Dione’s orbit.
The relatively recent introduction of foreign material to Dione could affect the habitability of the ocean world, the authors said. If space debris depositing onto Dione were to mix into its subsurface ocean, it could influence the ability of the water to sustain life.
“If we as geologists can do a better job of saying where material is coming from and how it is being introduced into these different environments then we can be a little bit more confident about whether or not Dione has an environment that is either habitable or whether or not that environment might be suitable for generating its own life,” Martin said. 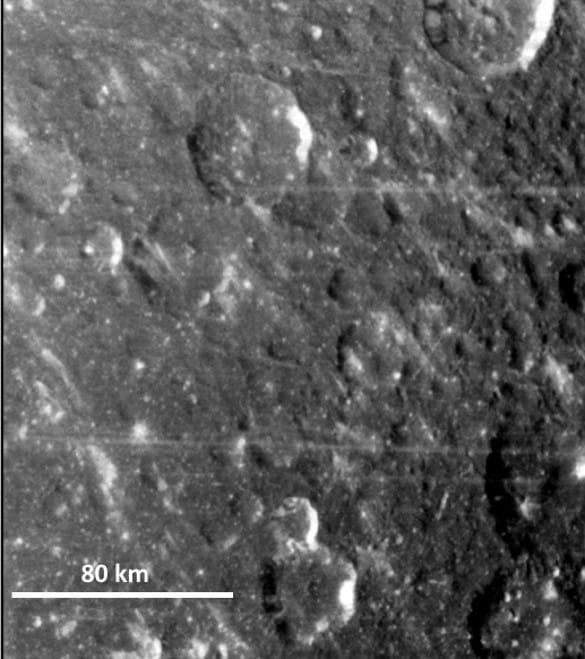