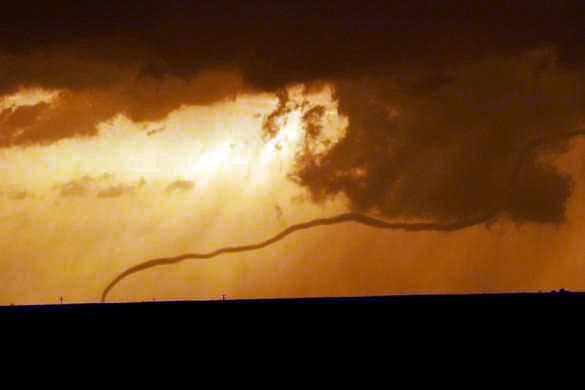 A tornado May 25, 2012 in Galatia, Kansas as it was decaying. Courtesy/Jana Houser 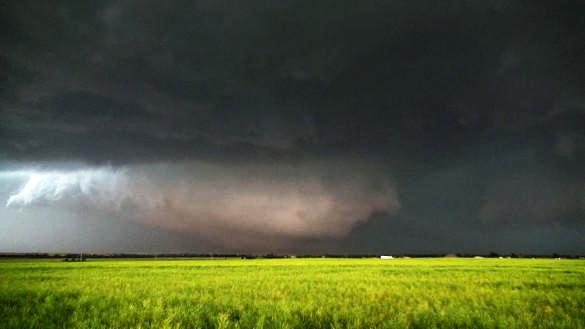 Shot of the EF-3 tornado near maximum width and peak intensity May 31, 2013 in El Reno, Okla. Courtesy/Nick Nolte, CC-BY-3.0
AGU News:
WASHINGTON, D.C. — New research challenges existing assumptions about how tornadoes form.
Historically, scientists assumed tornado rotation began in storm clouds, creating a funnel that travels downwards. This theory matches what storm chasers commonly observe visually in the field. Viewers often report seeing funnel clouds gradually descending until they make contact with the ground.
But new research combining a new type of Doppler radar with photos and videos of tornadoes formed by supercell thunderstorms shows the opposite is true: Tornadoes materialize from the ground up.
Weather forecasters typically issue tornado warnings based on radar observations of strong rotation above the ground, but the new findings suggest forecasters must re-evaluate their warning procedure, according to the researchers.
“We need to reconsider the paradigms that we have to explain tornado formation, and we especially need to communicate this to forecasters who are trying to make warnings and issue warnings,” said Jana Houser, a meteorologist at Ohio University in Athens who will present the new findings here today at the American Geophysical Union’s Fall Meeting. “You are not going to really ever be finding strong evidence of a tornado descending, so we need to stop making that a priority in our forecasting strategies.”
Research conducted in the 1970s suggested tornadoes form from rotation that starts several kilometers above Earth’s surface. The theory was that this funnel gradually sucked in air from below, descending until it touched the ground.
Most meteorologists have accepted this theory of tornado formation, but a series of new observations from rapidly scanning radars has started to change that.
One of the pivotal cases contributing to the new understanding of tornado formation occurred on May 31, 2013.  On this day, the El Reno tornado formed in central Oklahoma and shattered previous tornado records. It was the widest tornado ever recorded, peaking at 4.2 kilometers (2.6 miles) wide, and had wind speeds of more than 480 kilometers per hour (300 miles per hour), the second-highest wind speeds recorded on Earth.
Houser and a team of researchers from the University of Oklahoma happened to be monitoring the storm with a new type of mobile Doppler radar system that collected tornado wind speeds every 30 seconds. Afterwards, Anton Seimon, a geographer at Appalachian State University in Boone, North Carolina who had chased the El Reno storm, collected hundreds of still photos and videos of the epic twister from citizens and fellow storm chasers.
When Houser compared her radar data with images collected by Seimon, she noticed something odd. The images clearly showed a visible tornado at the ground several minutes before her radar picked it up.
Puzzled, Houser went back through her radar data and analyzed the data taken at the ground. It is typically difficult to get good radar measurements at or near the ground, but Houser and her team had deployed their instrument on a slight rise and there were no obstructions between them and the tornado, so this time, they had data good enough to work with.
She found clear evidence of rotation at the ground before there was rotation at higher altitudes. Houser then examined other sets of tornado data and found that in many cases, tornado-strength rotation develops at or near the ground first, rather than starting in the cloud itself. In all four datasets she analyzed, none of the tornadoes formed following the classical “top-down” process.
“It emphasizes the fact that we need to have strong, low-level, basically near-ground level rotation, located in the right spot, at the right time, with respect to the larger parent storm circulations in order to form a tornado,” Houser said. 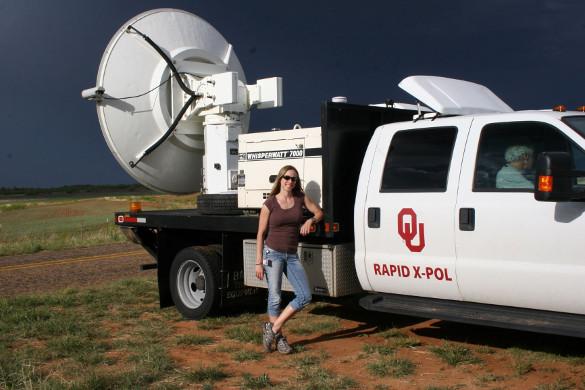