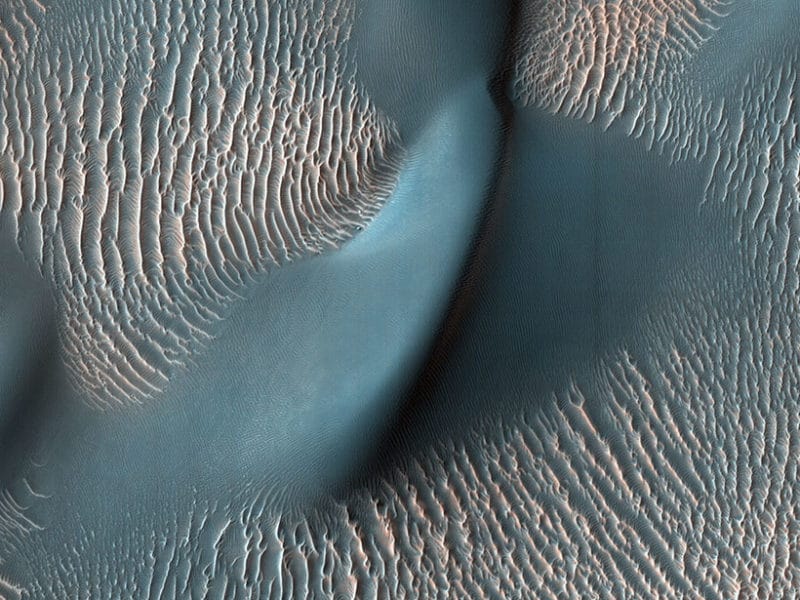 Large, bright-toned ripples in the sand within Proctor Crater on Mars. Courtesy/NASA/JPL-Caltech/University of Arizona

Scientists show for the first time that large sand ripples known as megaripples are migrating on Mars, according to a new study. The findings suggest Mars’s dusty surface might be much more active than previously suspected, offering clues about the Red Planet’s poorly understood atmosphere.

Sand dunes and ripples are typical features of deserts on both Earth and Mars. Megaripples are distinguished from smaller ripples by the coarser sand grains that gather at their crests, as well as by their larger size: Megaripples range from 30 centimeters (1 foot) to tens of meters across. Megaripples develop taller crests and migrate more slowly because their coarser grains are more difficult for wind to move.

Until now, scientists thought megaripples were relics of Mars’s more geologically active past. Many thought it was impossible for the Red Planet’s thin atmosphere—100 times less dense than Earth’s—to conjure up winds powerful enough to move the coarser crests. But the new study by Silvestro et al. shows that wind can blow hard enough to move megaripples, suggesting the Martian atmosphere is more dynamic than previously thought.

“The implications are global in terms of climate,” said Simone Silvestro, lead author of the new study and a staff research scientist at the National Institute for Astrophysics in Naples, Italy. “If you see these features are moving now, it means you don’t need the past climate to explain them.”

Megaripples are apparent in high-resolution images of Mars’s surface, but researchers considered them a now-static fixture formed long ago when the planet’s atmosphere was thicker.

Scientists had once thought the same of even small ripples in the sand, Silvestro said. “Since the 80s and 90s, Mars was considered kind of dead from a geological point of view,” he said.

Ten years ago, Silvestro and his colleagues used high-resolution images of Mars’s surface to prove that wind was moving the planet’s smaller ripples, publishing the findings in Geophysical Research Letters. Silvestro’s ripples study showed dynamic winds did exist on Mars, capable of changing the patterns of sand on the planet’s surface.

For his latest study, Silvestro and his colleagues looked at images of megaripples from HiRISE, the High Resolution Imaging Science Experiment camera on the Mars Reconnaissance Orbiter that has been taking pictures of the planet’s surface since 2006. They focused on two dune-associated locations, Nili Fossae and McLaughlin Crater, comparing images of megaripples at each site that were taken 5 Martian years apart. The team found that the megaripples moved an average of 1.2 meters (4 feet) at Nili Fossae and 0.9 meter (3 feet) at McLaughlin Crater over the roughly 5-year period.

“Now, 10 years later, we are seeing also the megaripples are moving,” Silvestro said. They are “the last thing you would expect to see moving, [but] they are also moving.”

The researchers noted that a previously known trait of Martian megaripples could also hold clues about the Martian atmosphere: Their crests are bright toned. Most of the sand covering Mars’s surface comes from basaltic rocks, giving dunes a dark color in HiRISE images, but megaripples buck this trend.

There are a couple of potential reasons for the megaripples’ crests’ lighter color scheme, Silvestro said. They are bright either because their slow movement relative to the dunes allows fine dust from the atmosphere to settle and accumulate or because the coarse sand that makes up the crests is itself composed of a different material. Either possibility could tell researchers more about the dynamics of the Martian atmosphere.

“If you want to understand the climate of Mars and the geology of Mars—present and past—and if you want to continue exploration by sending robots and one day sending humans, we want to know much more about the circulation of Mars and how the winds interact with the surface material,” Silvestro said.

Interest in megaripples on Mars has sparked renewed interest in the phenomenon back on Earth. Past studies on Earth megaripples and research grants Silvestro received to study megaripples in Morocco provided crucial information for his Mars megaripple research. It’s a reminder that as scientists strive to learn more about the Red Planet, sometimes the answers can be found closer to home, he said.

“These waves in sand have been studied for 150 years,” Silvestro said of terrestrial megaripples. “They probably thought that they were studying stuff that nobody would be interested in. But actually, many years later, we are using them to wonder how the atmosphere could work on other planets.” (Journal of Geophysical Research: Planets, https://doi.org/10.1029/2020JE006446, 2020)