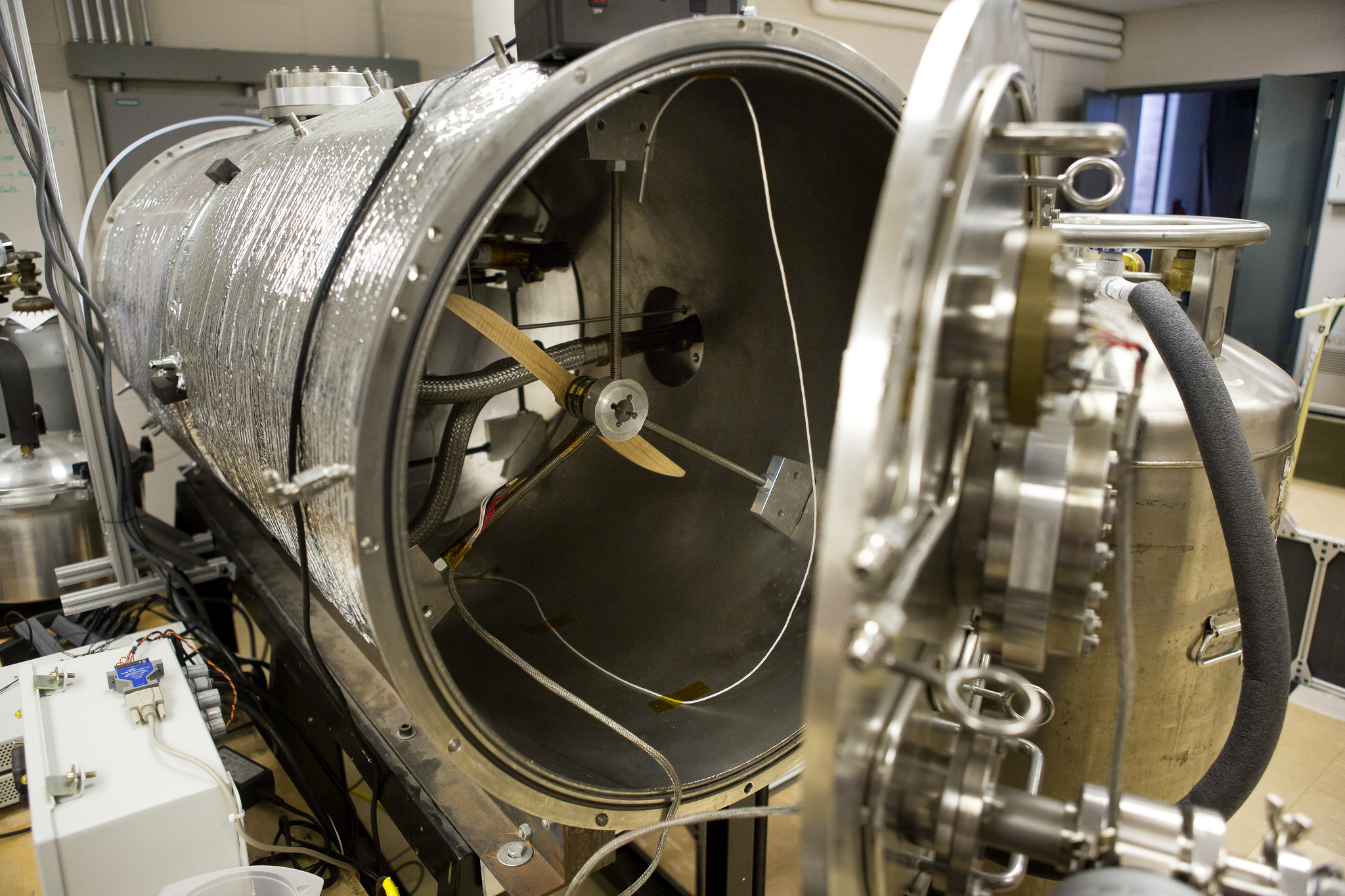 Researchers from the American Geophysical Union (AGU), partnering with the University of Michigan, have shown in chambers that mimic Mars’ conditions, that small amounts of liquid water could form on the planet despite its below-freezing temperatures.

Liquid water is an essential ingredient for life as we know it. Mars is one of the very few places in the solar system where scientists have seen promising signs of it – in gullies down crater rims, in instrument readings and in Phoenix spacecraft self-portraits that appeared to show wet beads on the lander’s leg several years ago.

No one has directly detected liquid water beyond Earth, though. Experiments at the University of Michigan are among the first to test theories about how it could exist in a climate as cold as Mars’.

The researchers found that a type of salt present in Martian soil can readily melt ice it touches – just like salts do on Earth’s slippery winter walkways and roads. But this Martian salt cannot, as some scientists suggested, form liquid water by sucking vapor out of the air through a process called deliquescence.

“For me, the most exciting thing is that I can now understand how the droplets formed on the Phoenix leg,” said Nilton Renno, a professor of atmospheric, oceanic and space sciences at the University of Michigan, who led the research. The new research is detailed in a paper accepted for publication in Geophysical Research Letters, a publication of the AGU.

In 2008, Renno was the first to notice strange globules in photos Phoenix sent back. Over several weeks, the globules seemed to grow and coalesce. While Renno deemed them water and suggested that salts on the planet’s surface might make it so, many of his colleagues disagreed. Salts had never been found on Mars.

But then they were. Among those that Phoenix detected, is calcium perchlorate—a mixture of calcium, chlorine and oxygen that’s found in arid places like the Atacama Desert in Chile. Years later, the Curiosity rover found it elsewhere on Mars. Now scientists believe it and other salts are sprinkled across the planet’s surface.

In the case of Phoenix, Renno believes the craft’s landing thrusters blasted away the topsoil, exposing the ice and melting it. That formed muddy saltwater that splashed on the lander’s leg as it touched down in the northern polar region. The salts allowed the droplets to remain liquid. Their existence and stability, Renno says, tipped scientists off to a cycle that doesn’t need always need help from an Earth-borne spacecraft.

The U-M researchers recreated the Phoenix landing site conditions in their lab in metal cylinders two feet high and five feet long. The late Martian spring/early summer temperatures in the chambers ranged from -185 to -5 Fahrenheit. Atmospheric pressure hovered around 1 percent of Earth’s. Relative humidity varied, but for most experiments, it was set to 100 percent.

They tested two scenarios: perchlorate by itself and perchlorate on top of water ice. In the perchlorate-only experiments, they put millimeter-thick layers of salt on a temperature-controlled plate or Mars-like soil. Even after more than three hours, no liquid water formed. That told them deliquescence wasn’t occurring, and isn’t likely to be a significant process on Mars.

When the researchers placed calcium perchlorate or salty soil directly on a 3-millimeter-thick ice layer, drops of liquid water formed within minutes when the chambers reached -100 F. That’s well within the range of conditions observed at the Phoenix landing site.

Researchers didn’t rely on their eyes or cameras to be sure liquid water was there. They used a technique called Raman scattering spectroscopy that involves shining lasers onto the surface and examining the reflected light. Different substances and states of matter have different reflective signatures.

The findings show how small amounts of liquid water could exist across a large swath of Mars’ surface and shallow sub-surface, from its polar regions to its mid-latitudes, for several hours a day during the spring and early summer. Such a cycle could form gullies, Renno says, flowing, freezing, thawing and flowing again. Water could also form just beneath the surface.

Renno says the water wouldn’t necessarily need to stay liquid indefinitely for it to support microbial life now or have supported it in the past. Antarctic saltwater and lattices of brine-filled ice-combs have been found to harbor microbial organisms on Earth.

“Mars is the planet in our solar system that is most similar to Earth. Studies suggest that Mars used to be even more Earth-like in the past, with flowing water on the surface. By studying the formation of liquid water on Mars we can learn about possibilities of life outside Earth and look for resources for future missions,” said Erik Fischer, doctoral student in the Department of Atmospheric, Oceanic and Space Sciences (AOSS) at the University of Michigan and first author of the new paper.

The research is supported by NASA’s Exobiology Program. In addition to Renno and Fischer, other authors are Harvey Elliott, doctoral student in AOSS and Germán M. Martínez, research scientist at AOSS.