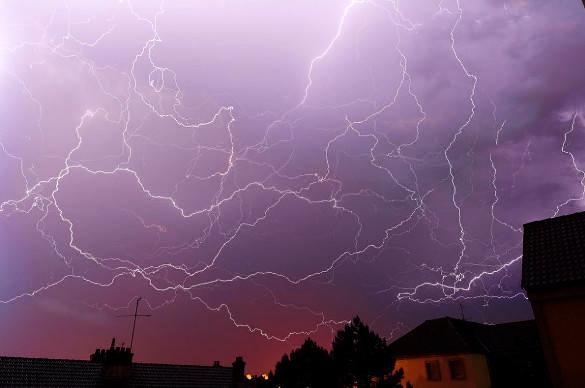 Thunderstorm seen from Belfort, France. Courtesy/Thomas Bresson, Flickr
AGU News:
Climate change could affect the regularity of summer afternoon thunderstorms in some parts of the world, according to new research.
A new study in the AGU journal Geophysical Research Letters modeled weather patterns in western Germany, northern France and parts of Belgium, the Netherlands and Luxembourg, under climate change.
Under a strong climate scenario, where greenhouse gas emissions continue to increase, extreme summer thunderstorms in these areas might break out more often overnight and in the morning rather than during their customary late afternoon periods, according to the new research.
“In future climates, this afternoon period may no longer be the most likely period to experience an extreme [thunderstorm],” said Edmund Meredith, a postdoctoral meteorologist at the Free University of Berlin and the lead author of the new study.
Thunderstorms are caused by atmospheric convection, which is the result of the instability caused when layers of air with different temperatures interact in the atmosphere. This instability causes the development of cumulus clouds and increased winds, while moisture in some layers can lead to thunderstorms.
Previous research has examined seasonal or yearly changes in storm patterns. This research used kilometer-scale climate models, which remove some of the previous uncertainty around atmospheric convection to predict an average increase or decrease in thunderstorms in some areas of the world.
In the new study, Meredith and his colleagues wanted to see whether daily storm patterns would be affected by predicted changes in atmospheric convection using a climate change scenario in which greenhouse gas emissions continue to increase.
When Meredith and his co-authors looked at future changes in thunderstorms in high-resolution climate models, they found that during warm weather in western Europe, the number of morning or overnight storms could increase at a higher rate than those during the afternoon.
While short, booming storms in the study area are currently more common in the afternoon, climate change may result in heavy rain and lightning more often overnight and in the morning. The new study also confirmed that extreme storms will intensify in the study area, though the authors found that changes in atmospheric instability are not reflective of changes in storm intensity.
“We found that all across the future climate daily cycle, more extreme levels of atmospheric instability are found, but that this does not always translate into more extreme storms,” Meredith said.
While the new study was focused on western Europe, Meredith said that other parts of the world may also see daily shifts in storm patterns – particularly with extreme events. He said future climate change often increases instability in the atmosphere while reducing moisture availability, or vice-versa, making projection of extreme storms more challenging.
Menu
Los Alamos
88°
Sunny
5:48am8:23pm MDT
Feels like: 88°F
Wind: 9mph SSE
Humidity: 9%
Pressure: 29.76"Hg
UV index: 1
TueWedThu
88/64°F
91/64°F
90/64°F
Weather forecast Los Alamos, New Mexico ▸