AGU: Climate Change May Cause Extreme Waves In Arctic 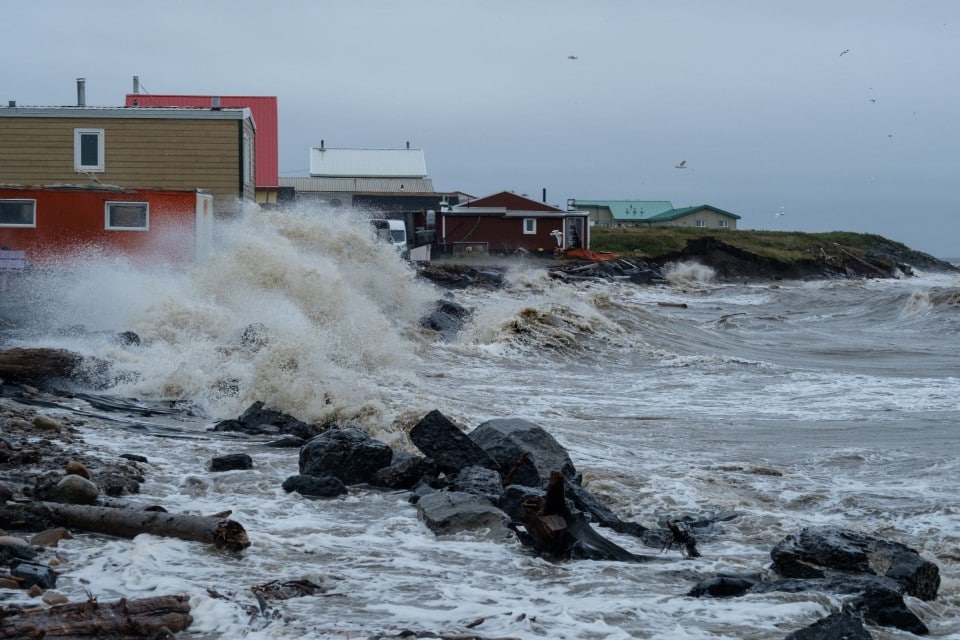 A wave washing up on the Inuvialuit hamlet of Tuktoyaktuk in Canada’s Northwest Territories during an August 2019 storm. Photo by Weronika Murray

WASHINGTON, D.C. — Extreme ocean surface waves with a devastating impact on coastal communities and infrastructure in the Arctic may become larger due to climate change, according to a new study.

The new research projects the annual maximum wave height will get up to two to three times higher than it is now along coastlines in areas of the Arctic such as along the Beaufort Sea.

The new study in AGU’s Journal of Geophysical Research: Oceans suggests waves could get up to 2 meters (6.6 feet) higher than current wave heights by the end of the century.

“It increases the risk of flooding and erosion. It increases drastically almost everywhere,” said Mercè Casas-Prat, a research scientist with Environment and Climate Change Canada’s (ECCC) Climate Research Division and the lead author of the new study. “This can have a direct impact to the communities that live close to the shoreline.”

Climate change in the Arctic

Earth’s northernmost regions are a global warming hotspot, with some areas experiencing up to three times the warming of the rest of the world, Casas-Prat said. But researchers lack information on how the impacts may play out.

Casas-Prat and her co-author Xiaolan Wang, also with the ECCC, wanted to examine how global warming might impact extreme ocean surface waves in the Arctic. Casas-Prat said some northern communities are already reporting accelerated erosion in some areas and increased building damage due to extreme waves. A worsening of these ocean conditions will have a direct impact on coastal communities, energy infrastructure, shipping, and even ecosystems and wildlife.

Much of the Arctic is frozen for most of the year, but the warming climate is contributing to increasing periods of open water, which can become an issue when extreme waves are factored into the equation.

In the new study, the scientists gathered five sets of multi-model simulations of oceanic and atmospheric conditions like surface winds, which generate waves, as well as sea ice for the RCP8.5 scenario, a future scenario commonly used in climate change projections that assumes low efforts to curb emissions. Then they ran simulations of wave conditions for two periods, from 1979 to 2005 (historical), then from 2081 to 2100 (future). Using the ensemble of multi-model simulations, they were able to assess the uncertainty in the changes in the extreme Arctic waves due to the uncertainty present in the five climate models used.

One of their main findings was a projected notable wave height increase between these two periods in almost every place in the Arctic.

Among the hardest-hit areas was in the Greenland Sea, which lies between Greenland and the Norwegian archipelago of Svalbard. The study found maximum annual wave heights there could increase by as much as 6 meters (19.7 feet).

Casas-Prat said the models present a degree of uncertainty about how much waves heights might change, but she is confident there is going to be an increase. The researchers’ predictions also showed that by the end of the century, the timing of the highest waves may also change.

“At the end of the century, the maximum will on average come later in the year and also be more extreme,” Casas-Prat said.

Judah Cohen, a climatologist at the Massachusetts Institute of Technology who was not involved in Casas-Prat’s research, said these waves could be particularly devastating to coastal areas that have never previously experienced open water.

“The main conclusions of the paper are that waves will increase in height in the Arctic region and that Arctic coastlines are at greater risk to erosion and flooding are fairly straightforward,” he said. “We are already seeing these increased risks along Arctic coastlines with damage to coastline structures that previously were never damaged.”

The researchers examined one area of coastline along the Beaufort Sea in northern Alaska and Canada, which holds a number of communities as well as energy infrastructure, and also found notable wave height increases there.

Since larger waves can lead to increased risks of flooding and damage to coastal infrastructure, communities and development in this area might be affected by these waves. Flooding can also impact the availability of fresh water in some areas, as storm and wave surges can get into freshwater lagoons that communities rely on.

“As more and more ice melts and more of the Arctic ocean surface becomes exposed to the wind, waves will increase in height because wave height is dependent on the distance the wind blows over open waters,” Cohen said.

In another recent study published in AGU’s journal Geophysical Research Letters, Casas-Prat and Wang examined the contribution of sea ice retreat on the projected increases in extreme wave heights in the Arctic. They found that surface winds alone cannot explain the changes in the regional maximum wave heights.

“Sea ice retreat plays an important role, not just by increasing the distance over which wind can blow and generate waves but also by increasing the chance of strong winds to occur over widening ice-free waters,” Casas-Prat said.

Increased waves could also increase the speed of ice breakup. The loss of ice due to waves could affect animals like polar bears which hunt seals on polar ice as well as a number of other creatures that rely on ice. It could also affect shipping routes in the future.

“Waves definitely have to be taken into account as an important factor to ensure those routes are safe,” Casas-Prat said.