A graph of Dahurian larch tree growth from 1964-2014. BAI stands for basal area increment – the amount of area the trees gained in cross-section each year, in square millimeters. The lines represent average growth for trees of different age groups (150 to 200 years old, 200 to 250 years old, 250 to 300 years old, and older than 300 years). The spike in growth around 2004 is evident. Courtesy/AGU/Journal of Geophysical Research: Biogeosciences 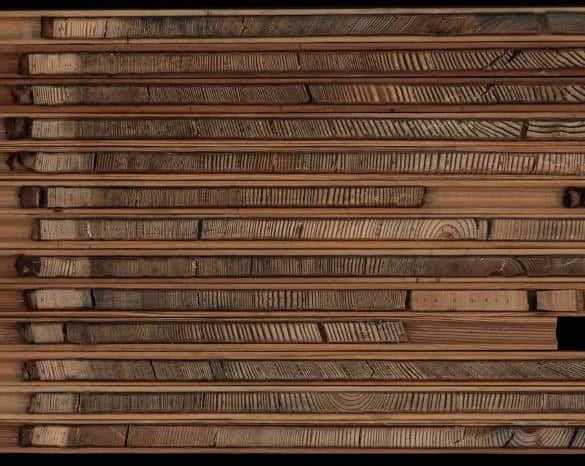 AGU News:
WASHINGTON, D.C. — Larch trees in the permafrost forests of northeastern China—the northernmost tree species on Earth—are growing faster as a result of climate change, according to new research.
A new study of growth rings from Dahurian larch in China’s northern forests finds the hardy trees grew more from 2005 to 2014 than in the preceding 40 years.
The findings also show the oldest trees have had the biggest growth spurts: Trees older than 400 years grew more rapidly in those 10 years than in the past 300 years, according to the new study.
The study’s authors suspect warmer soil temperatures are fueling the growth spurts by lowering the depth of the permafrost layer, allowing the trees’ roots to expand and suck up more nutrients.
The increased growth is good for the trees in the short-term but may be disastrous for the forests in the long-term, according to the authors. As the climate continues to warm, the permafrost underneath the trees may eventually degrade and no longer be able to support the slow-growing trees.
No other tree species can survive the permafrost plains this far north, so if the larch forests of northern Asia disappear, the entire ecosystem would change, according to the study’s authors.
“The disappearance of larch would be a disaster to the forest ecosystem in this region,” said Xianliang Zhang, an ecologist at Shenyang Agricultural University in Shenhang, China, and lead author of the new study in AGU’s Journal of Geophysical Research: Biogeosciences.
Earth’s hardiest trees
Dahurian larch is Earth’s northernmost tree species and its most cold-hardy: These larches are the only trees that can tolerate the frigid permafrost plains of Russia, Mongolia and northern China. Chinese locals refer to Dahurian larch as “thin-old-trees,” because they grow slowly in the thin active layer of soil above the permafrost and can live for more than 400 years.
Permafrost regions around the world have been thawing in recent decades due to rising temperatures, sometimes degrading into swamps and wetlands. In the new study, Zhang and his colleagues analyzed growth rings from more than 400 Dahurian larch in old-growth forests of northeastern China, the southernmost portion of the tree’s range, to see how the trees are faring in a warming climate.
Tree rings allow scientists to measure how much trees grow from year to year. Much like people, trees do most of their growing while young. Dahurian larch generally grow rapidly until they become around 150 years old, at which point their growth slows. When the trees hit 300 years old, their growth basically stalls.
The researchers used the width of each tree’s growth rings to calculate how much area each tree gained in cross-section each year over the course of its lifetime.
The results show Dahurian larch trees grew more from 2005 to 2014 than from 1964 to 2004. Interestingly, the effect was most pronounced in the oldest trees: Trees older than 300 years grew 80 percent more from 2005 to 2014 than in the preceding 40 years. Trees between 250 and 300 years old grew 35 percent more during that time period, while trees younger than 250 years grew between 11 and 13 percent more.
The old trees’ growth is unusual – it’s akin to a 100-year-old person suddenly getting taller, according to Zhang. The authors suspect older trees are growing more than younger trees because they have more developed root systems that can harvest resources from the soil more efficiently.
The researchers compared the trees’ growth rates to climate factors like soil temperatures and precipitation data over the past 50 years to see what was causing the unusual growth. They found increased soil temperatures, especially in winter, are likely powering the growth spurts. They suspect the warmer temperatures lower the depth of the permafrost layer, providing the trees’ roots more room to expand and access to more nutrients.
While this initial soil warming has benefitted Dahurian larch, further permafrost thaw could likely decrease tree growth and even cause the forest to decay, according to the authors. Dahurian larch can’t survive in wet conditions, so permafrost changing to wetlands or peatlands would be detrimental to the forest as a whole, they said.
“If the larch forest retreat in this region in the future, it is also not a good sign for the whole boreal forest,” Zhang said.
While other research has examined the effects of a warming climate on temperature-sensitive trees in North America, the new study examined temperature-sensitive trees in permafrost areas, which have been less widely studied but are a vast component of the boreal forest, said Erika Wise, an associate professor of geography at the University of North Carolina – Chapel Hill, who was not involved in the new study. Additionally, previous studies on these larch trees have focused on the effects of air temperature and precipitation, but the new study looked at the influence of ground surface temperatures, which has also not been studied widely, she added.
“Their arguments make a lot of logical sense in terms of why the trees might benefit from the increased winter ground surface temperatures, which is that especially things like an earlier spring thaw could really help trees get growing earlier, more ability to have root activity in the cold months, these sort of things would make sense in why trees would benefit from warmer winters in particular,” Wise said.
A photo of Dahurian larch trees growing in the permafrost plains of Northern China. New research finds climate change is giving the thin, tall trees a growth spurt. Courtesy/Xianliang Zhang
Menu
Los Alamos
73°
Fair
5:49am8:25pm MDT
Feels like: 73°F
Wind: 6mph NNW
Humidity: 17%
Pressure: 30.13"Hg
UV index: 0
MonTueWed
84/57°F
88/66°F
88/64°F
Weather forecast Los Alamos, New Mexico ▸