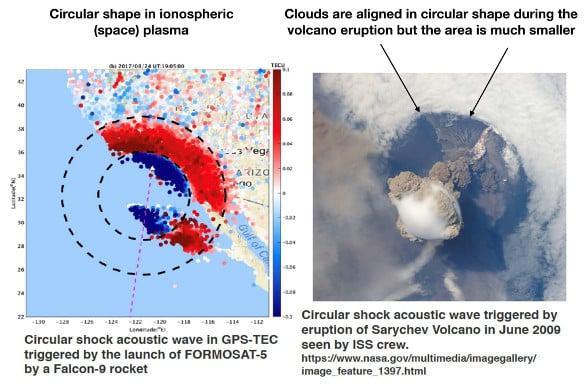 AGU News:
The unusual trajectory the SpaceX Falcon 9 rocket took when delivering a Taiwanese satellite into orbit last August created an atmospheric shock wave four times bigger than the area of California, a new study finds.
All rocket launches create shock waves, which are atmospheric disturbances traveling faster than the speed of sound. They can’t be seen by human eyes but can be detected by GPS receivers monitoring the atmosphere and space.
Most rocket-induced shock waves are V-shaped when viewed from space because rockets tend to follow a curved trajectory after launch. But Falcon 9’s trajectory on August 24, 2017, was nearly vertical because it was carrying a light payload of only one satellite, Taiwan’s FORMOSAT-5 Earth-observing satellite. That trajectory created a circular atmospheric shock wave as opposed to a V-shaped one.
This is the first report of a circular shock wave triggered by a rocket launch, according to researchers studying the launch’s effect on the upper atmosphere. They said it was the largest circular shock wave they had ever seen.
“We’ve seen many cases of a rocket-produced disturbance, but there’s never been something that perfectly circular and with that large area,” said Charles Lin, a geophysicist at the National Cheng Kung University in Taiwan and lead author of a new study describing the unusual launch in Space Weather, a journal of the American Geophysical Union.
Scientists need to understand how rocket launches affect the atmosphere because atmospheric disturbances can disrupt technologies like global positioning and navigation systems, Lin said. He found in the new study that the FORMOSAT-5 launch disturbed Earth’s ionosphere in a way that threw off GPS locations by up to one meter (three feet) for up to two hours after the launch, potentially affecting aviation and military navigation systems.
An unusual rocket launch
The ionosphere is a region of the upper atmosphere extending from about 60 to 1,000 kilometers (37 to 620 miles) above Earth’s surface. It is essentially a shell of electrons and charged particles called plasma created by ultraviolet radiation from the Sun.
Most rockets follow a curved trajectory after launch and deliver satellites to an altitude of about 200 kilometers (125 miles), creating a V-shaped shock wave in the ionosphere. After that, operators on the ground remotely maneuver the satellite to get it to the correct altitude and angle.
But the FORMOSAT-5 launch, Taiwan’s first self-made satellite, was unique. The satellite was originally scheduled to launch with several others but was delayed because of a Falcon 9 launchpad explosion in September 2016. By the time the launch was rescheduled, FORMOSAT-5 was the rocket’s only cargo.
With such a light payload, Falcon 9 traveled nearly vertically after its launch from California’s Vandenberg Air Force Base August 24, 2017. The rocket delivered the satellite to its intended altitude of 720 kilometers (450 miles) shortly after.
Detecting changes in the ionosphere
In the new study, Lin and his colleagues used GPS signals to determine how the FORMOSAT-5 launch affected the upper atmosphere. They found Falcon 9’s vertical trajectory created a circular shock wave above the western United States that had never before been seen from a rocket launch. The only similarly-shaped shock wave Lin had seen was from an eruption of Russia’s Sarychev volcano in June 2009.
Not only was the shock wave circular, it was also the largest one Lin had ever seen – roughly four times the area of California. In the new study, he ran computer simulations of rocket launches and found the momentum from a vertical trajectory would tend to create a much stronger atmospheric disturbance than a curved one, which could explain why the shock wave was so large.
In addition to creating a gigantic shock wave, the launch created a hole in the ionosphere above California. Water vapor in the rocket’s exhaust reacted with the ionosphere’s charged particles to create a hole in the plasma layer that took up to two hours to recover.
GPS signals must travel through the ionosphere to reach Earth’s surface, and the speed at which they travel can change if the amount of plasma in the ionosphere fluctuates. Changes to the ionosphere can induce errors into GPS navigation signals.
The plasma hole induced by FORMOSAT-5’s launch induced GPS navigation errors over California of up to one meter (three feet) for one to two hours after the launch. The errors weren’t large enough to be noticed by civilian users, but they could have affected professional users such as aviators and the military. The new study did not examine how GPS measurements were affected.
“As rocket launches become more common, Lin sees a need to better understand their effects on the upper atmosphere to be able to compensate for any effects they have on GPS navigation or other spaceborne technologies. The Sun is currently in a solar minimum, when the Sun’s activity is low. But during times when solar activity is high, rocket-induced changes to the ionosphere could be amplified, inducing even greater errors into GPS positioning,” Lin said. 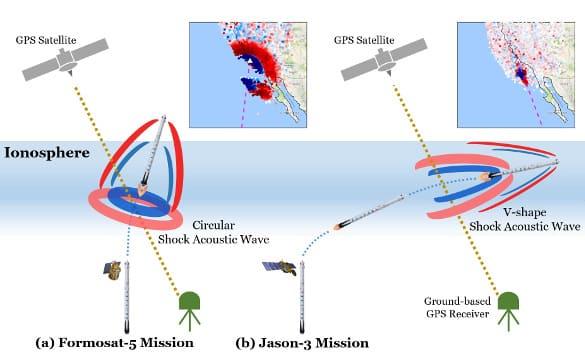