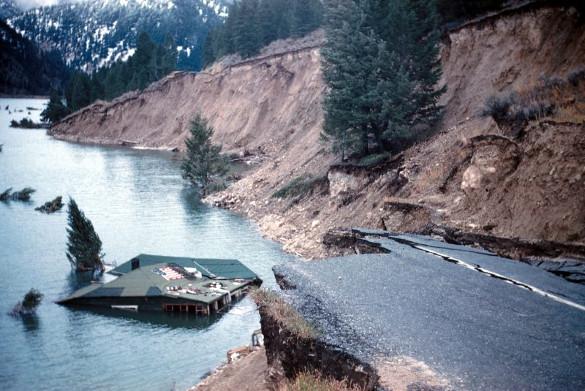 State Highway 287 slumped into Hebgen Lake; damage from the August 1959 Hebgen Lake (Montana-Yellowstone) earthquake. Photo by I.J. Witkind/USGS
AGU News:
Aug. 17, 1959, back when Dwight D. Eisenhower was president, the U.S. had yet to send a human to space and the nation’s flag sported 49 stars, Yellowstone National Park shook violently for about 30 seconds.
The shock was strong enough to drop the ground a full 20 feet in some places. It toppled the dining room fireplace in the Old Faithful Inn. Groundwater swelled up and down in wells as far away as Hawaii. Twenty-eight people died. It went down in Yellowstone history as the Hebgen Lake earthquake, with a magnitude of 7.2.
And in 2017, nearly 60 years and 11 presidents later, the Hebgen Lake quake shook Yellowstone again. A swarm of more than 3,000 small earthquakes in the Maple Creek area (in Yellowstone National Park but outside of the Yellowstone volcano caldera) between June 2017 and March 2018 are, at least in part, aftershocks of the 1959 quake. That’s according to a study published in the AGU journal Geophysical Research Letters by University of Utah geoscientists led by Guanning Pang and Keith Koper.
“These kinds of earthquakes in Yellowstone are very common,” says Koper, director of the University of Utah Seismograph Stations. “These swarms happen very frequently. This one was a little bit longer and had more events than normal.”
“We don’t think it will increase the risk of an eruption,” Pang adds.
A long seismic tail
Taken together, the more than 3,000 small quakes of the Maple Creek swarm can be divided into two clusters. The northern cluster consists of Hebgen Lake aftershocks. The quakes fell along the same fault line, and were oriented the same way, as the Hebgen Lake event. Also, the team didn’t see signs that the northern cluster was caused by movement of magma and other fluids beneath the ground.
Koper and Pang says it’s not unheard of for aftershocks of a large earthquake to continue decades after the initial event. Pang, for example, has also studied aftershocks as recent as 2017 from the 1983 Borah Peak earthquake in central Idaho.
“There are formulas to predict how many aftershocks you should see,” Koper says. “For Hebgen Lake, there looked like a deficit in the number of aftershocks. Now that we’ve had these, it has evened things out back up to the original expectations.”
A second culprit
The southern cluster of the Maple Creek swarm seems to have a different origin. Although the northern cluster was lined up with the Hebgen Lake fault, the southern cluster’s lineup was rotated about 30 degrees and the quakes were about 0.6 miles (1 kilometer) shallower than the northern cluster.
So, the researchers concluded, although the shaking in the northern cluster influenced the southern cluster, the primarily cause of the southern shaking was
likely caused by subsurface movement of magma. “We do consider it to be one swarm all together,” Koper says. “Because they were so close, there was some feedback and influence between the two sections.”
Koper says that the results highlight how earthquakes are different than other natural hazards. Floods, hurricanes or wildfires are over when they’re over. “Earthquakes don’t happen as a single discrete event in time,” he says. The specter of aftershocks can continue for months, years or even, as Maple Creek shows, decades. 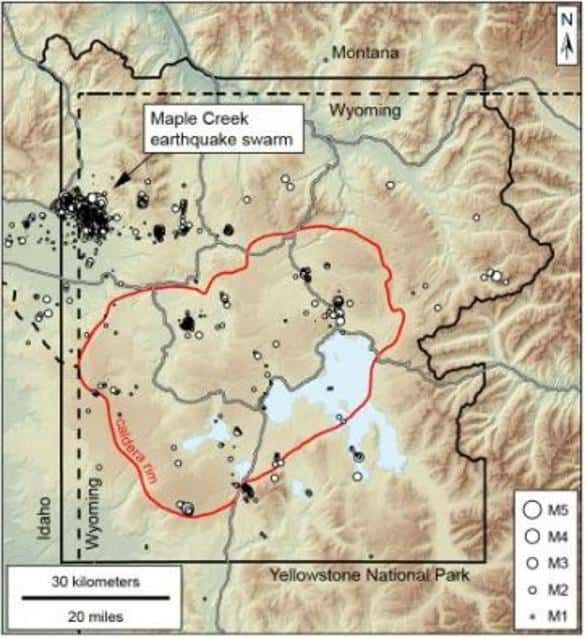 Location of the Maple Creek swarm, made using data from the U Seismograph Stations. Courtesy/USGS