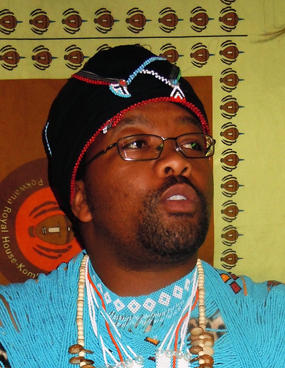 Los Alamos County has announced that the South African band Dizu Plaatjies Ibuyambo have had to cancel their performance scheduled for today and Saturday in Los Alamos because of problems obtaining visas to travel to the United States.

However, Ibuyambo’s cultural entertainment representative and Xhosa tribe member Prince “Zuko” Jongisilo Pokwana ka Menziwa and his wife Nosizwe, are still planning a visit to Los Alamos to participate in “Culture on Tap” at 5 p.m. July 15 at Unquarked Wine Room.

At “Culture on Tap,” Prince Zuko will share his life story with the public, from growing up in a small Zulu village to becoming the ruler of the Xhosa tribe, and his ongoing work in political and social issues that affect his people, as well as his cultural development company, Vusizwe.

Prince Zuko and his wife also will attend other community events during their stay. They attended Tuesday’s weekly lunch meeting of the Los Alamos Rotary Club and plan to attend various Los Alamos ScienceFest events through July 18.

Ibuyambo had been scheduled to perform at the International Folk Art Market in Santa Fe (July 10-12), then at Ashley Pond in Los Alamos July 15 and at Bathtub Row Brewing Co-op July 18.

Prince Zuko and his music ensemble were first introduced to the town of Los Alamos by accident when, in 2014, the group was scheduled to perform at the International Folk Art Market in Santa Fe but was rerouted to Los Alamos. Deborah Sorensen, a White Rock native and tour guide, assisted the group and showed them around the area, fostering a new friendship.

Prince Zuko intends to bring his group back to Los Alamos again in 2016.

“Culture on Tap” is part of Los Alamos ScienceFest – the town’s signature annual event, themed “the Secret City Unlocked” in recognition of the recent designation of the Manhattan Project Historic National Park and popularity of the WGN hit TV series “Manhattan.” There is no charge.