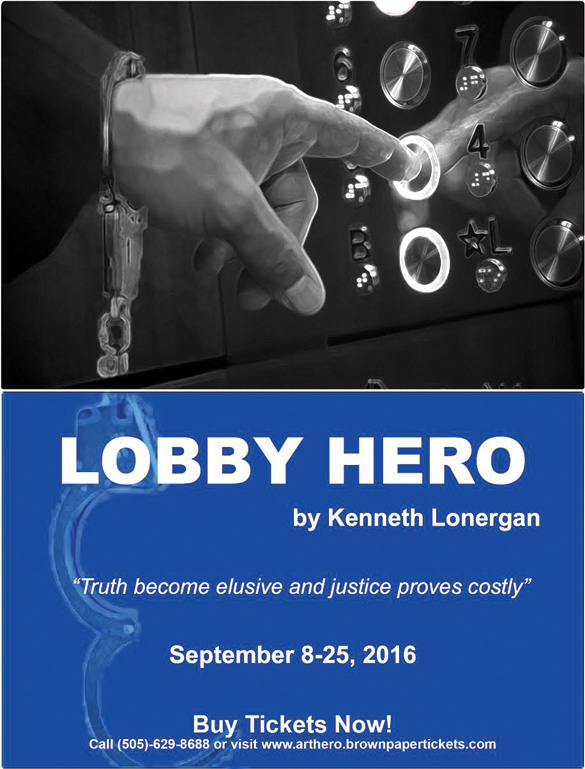 The Adobe Rose Theatre in Santa Fe will present ‘Lobby Hero’ by Kenneth Lonergan and directed by Staci Robbins Sept. 8-25.

Lobby Hero – nominated for the Outer Critics Circle Award for Outstanding Off-Broadway Play, tells the story of Jeff, a luckless young security guard trying to get his life together after being thrown out of the Navy.

But the lobby proves to be no sanctuary from the world, as Jeff is drawn into a local murder investigation involving his supervisor, a tightly wound young man called upon to bear witness against his troubled brother, and an overzealous and beautiful rookie policewoman, who is in over her head with her unscrupulous hero-cop partner.

As the plot unfolds truth becomes elusive, and justice proves costly, as the New York Times review said “(…) motives come in every shade but black and white in Lobby Hero.”

Jason Zinoman of the New York Times writes that Lobby Hero is “the best new American drama of the first decade of this century”, and calls it Lonergan’s “most searching, philosophical drama.

It’s a comedy, a romance and a play of ideas rolled into one. Low-key melancholy is intercut with sparks of hopeful wit. You may find your point of view toward the characters changing several times before the curtain.” NYT

Merritt Glover as Dawn, and Vaughn Irving as Bill.

The Adobe Rose Theatre is located at 1213B Parkway Drive, in Santa Fe,, just west of Siler Road and north of Rufina.

Founded in 2015 by Maureen Joyce McKenna, the theatre takes its name from the distinctive New Mexican Adobe style, and the Rose Theatre, one of London’s oldest theatre venues. She teamed up with Board President Bruce McKenna and Artistic Director Wendy Chapin – like McKenna, veterans of theatre, film, writing and education – to create a space for play productions, the development of new plays and playwrights, and the education and professional training of actors.

“We are hard at work refining our Black Box theatre at 1213B Parkway Dr. in Santa Fe,” McKenna said. “The space has unlimited seating and stage configurations with comfortable seats and convenient parking.”

Sustainability and a light environmental footprint are key parts of the plan.

“Watch us create new and exciting ways to stage plays that reuse, recycle, and reduce the burden on our planet,” McKenna said.

Adobe Rose has a cafe for light pre-dinner food and drinks, or a post show glass of wine.