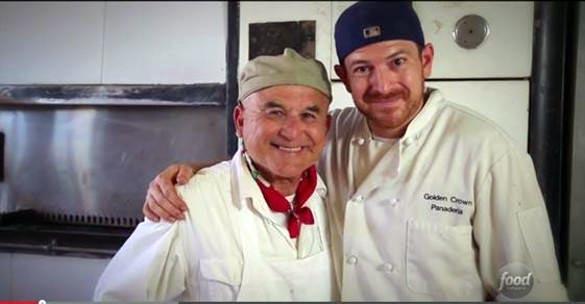 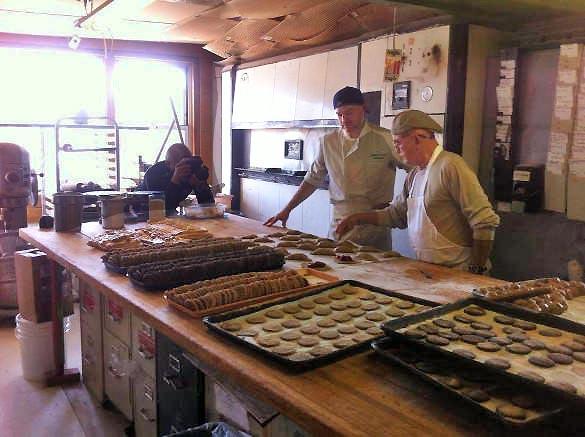 Golden Crown Panaderia owners Chris and Pratt Morales prepare an order for shipment. Courtesy photo
By SANDY NELSON
Finance New Mexico
It’s one thing for a bakery to boast about its own tasty products, but it’s quite another for the publisher of a foodie blog to broadcast rave reviews from around the world and add a few superlatives of his own.
Gil Garduño, publisher of Gil’s Thrilling (and Filling) Blog, has eaten at more than 1,000 New Mexico restaurants over the past decade and calls Golden Crown Panaderia “the very best bakery in Albuquerque.”
In a mouth-watering 2016 review (https://www.nmgastronome.com/?p=285), Garduño describes the artisan breads, pizzas and pastries that the family-owned, Old Town-area business has been making since 1972 and adds, “This humble Panaderia has been consistently ranked by TripAdvisor, the world’s largest travel community, as one of the top five out of 1,235 restaurants in the Duke City. Golden Crown receives similar praise from Yelp, while Lonely Planet, a French publication, calls Golden Crown ‘Albuquerque’s best place to eat.’ ”
After 12 years of working from a building at 14th and Central, founder Pratt Morales and his son Christopher moved the bakery to a bigger shop on Mountain Road NW so they could expand their customer base beyond the businesses and individuals who regularly purchased their products. In 2004 they had the opportunity to purchase the Mountain Road building.
“I had run my business for years without borrowing,” Pratt Morales said, “but if Chris and I were to realize our plans for purchasing and expanding the bakery’s building, we needed credit to do it.”
Because he hadn’t needed to borrow before, Morales didn’t have the kind of credit history that traditional lenders want to see before approving loans. But given the bakery’s enormous popularity with its customers and decades of success, a local banker referred Morales to Accion, a community development financial institution that serves the five-state region of Arizona, Colorado, Nevada, New Mexico and Texas.
“Propelled by a loan from Accion, Pratt and Chris happily own their building and are expanding their sales through the internet, shipping a little taste of New Mexico to places as far away as Nigeria and Bulgaria,” said Greg Levenson, president and CEO of Southwest Capital Bank and a member of the Accion board of directors. “It’s these local success stories that make me proud to serve on the Accion board.”
A recent longitudinal study of Accion’s clients found that 94 percent of borrowers surveyed were still in business three years after receiving their loan, 60 percent had increased sales, 57 percent had increased profits and 40 percent had added jobs during the study period, Levenson added.
Accion has lent more than $58.4 million to more than 4,164 small businesses in New Mexico alone since its inception in 1994, creating almost 8,000 jobs in 186 communities.
And it’s not just jobs that small businesses like Golden Crown Panaderia provide: They also offer the character and sense of familiarity and community that locals appreciate in an era when cookie-cutter national chains and faceless online vendors pull many dollars out of state.
“We are committed to preserving the integrity of an old-fashioned neighborhood bakery,” Morales said. “I think a little bakery like this is an art that should be preserved and shared with future generations.”
For more information about Accion, visit https://us.accion.org/region/az-co-nv-nm-and-tx/.
To purchase bakery items from Golden Crown Panaderia, go to http://goldencrown.biz/wp/ or visit the store Tuesdays through Sundays at 1103 Mountain Rd. NW in Albuquerque.
Finance New Mexico connects individuals and businesses with skills and funding resources for their business or idea. To learn more, go to click here.
Menu
Los Alamos
70°
Partly Cloudy
5:48am8:24pm MDT
Feels like: 70°F
Wind: 10mph NW
Humidity: 38%
Pressure: 29.84"Hg
UV index: 0
SatSunMon
84/63°F
90/66°F
84/61°F
Weather forecast Los Alamos, New Mexico ▸