A Look On The Brighter Side Of Global Warming 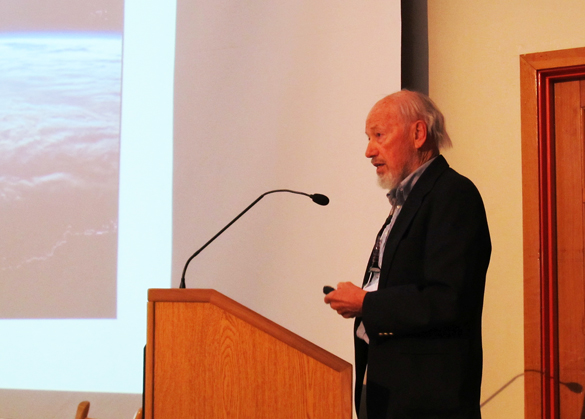 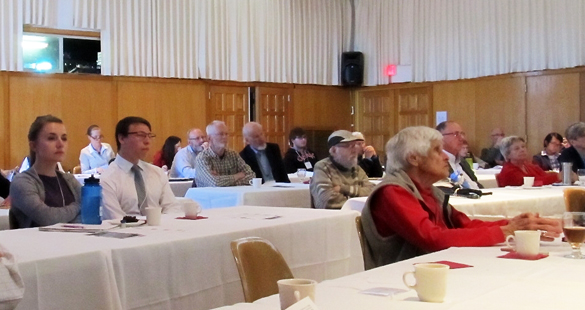 Audience members listen to speakers at the symposium on climate change. Photo by Roger Snodgrass
By ROGER SNODGRASS

The threat of catastrophic global warming is still very much upon us, but according to some knowledgeable speakers on the eve of Earth Day 2015, there are a few new grounds for encouragement despite the prevailing gloom.

“I don’t think there is any serious debate about the science anymore,” said former U.S. Sen. Jeff Bingaman, a Democrat who served five terms in the Senate, “There is disagreement, but it is on the margins.”

Bingaman was the first speaker at a symposium on climate change, presented by the Santa Fe World Affairs Forum recently at St. John’s College in Santa Fe, reaffirming the conclusion that climate change is a scientific reality and that humans have caused it, largely as a consequence of greenhouse gas emissions like carbon dioxide from excessive use of fossil fuels. And implying the follow-up question: If you’re one of the people who share this view, what are we going to do about it?

Bingaman’s introductory remarks at the conference framed the intractable problem of climate change from a national legislative perspective in which a scientific consensus is not necessarily politically sufficient. “There are a lot of folks who have not made the transition,” Bingaman said with characteristic understatement.

Against solid opposition from the Republicans during his tenure in Washington, D.C., Bingaman reasoned that the easiest thing to do would be to pursue energy options that would serve the two sides’ mutual interests, like investing in renewable fuels and increasing energy efficiencies, as opposed to prioritizing relatively large subsidies for fossil fuel industries.

Over the long haul, Bingaman saw the need to adopt one of the plans for making sure the full cost of the energy was adequately reflected in its cost, meaning some sort of carbon tax.

All of these remedies have met with substantial resistance in recent years and the stalemate continues. Just this week, the White House expressed President Obama’s intention to veto the current energy appropriation bill passed by House Republicans that would cut funding for renewable energy in half and energy efficiency by 40 percent, while adding to fossil fuel energy subsidies.

Unable to move the climate change agenda very much, even while holding the gavel as chairman of the Senate Energy and Natural Resources Committee, Bingaman, working in the non-profit sector, has lately teamed with Republican Secretary of State and Treasury George Shultz on ways to maneuver around Congressional gridlock.

The bipartisan duo has collaborated on a “State Energy Cookbook.” The policy guide brings together at the state level the best policy and strategies for empowering state governments toward  energy conservation and improving the efficiency and economics of renewable energy sources like wind and solar.

Ambassador Judy Garber, Acting Assistant Secretary of State for Oceans, Environment and Science gave an emphatically upbeat talk about prospects for the next environmental summit scheduled in Paris later this year, especially on the matter of “doing something about it.”

After years of lackluster international climate summits that have barely managed to agree to keep trying since the Kyoto climate conference in 1997, this year’s summit has an exciting goal to reach a universal agreement that will limit the rise of average global temperatures to 2 degrees Celsius.(3.8 degrees Fahrenheit).

Still subject to much debate, holding global warming down to a maximum, two-degree increase is considered to be the minimum threshold for averting catastrophic warming. And, not mentioning the hard work of follow up and compliance, merely agreeing on the goal would be a big deal.

The U.S. and China have already advanced substantial commitments. The U.S target for reducing greenhouse gas emissions has been boosted to 26-28 percent below 2005 levels by the year 2025, and China’s pledge to set a fifteen year deadline for when it would reach its peak in carbon emissions. Hailed as substantial steps, the announcements hinted a new dynamic in the international arena.

Chick Keller, a retired Los Alamos National Laboratory physicist and a planetary scientist and one of the founders of the lab’s climate change computer modeling program, said he was impressed by Garber’s optimism and could not help but notice the contrast with Sen. Bingaman’s pessimism.

He thought it might have to do with the fact that President Obama was acting under an Executive Order. “If you have to ask the Congress for any of this nothing will happen,” he said. “Question: How far can you go without Congress saying okay?”

Garber said the President has asked Congress to engage, but that President’s authority was established from earlier laws.

“If the U.S. acts other countries will follow,” she added. “We’re trying to be out there showing we have ambition to show what we can do, but not put anything on the table that we can’t reach.”

Keller’s talk on the second day of the conference, “Understanding Climate Change: The Interplay of Observations and Modeling,” provided a thorough review of the current climate situation in its historical context. He put a positive slant on his presentation by explaining that a discrepancy between models and actual temperatures in the last 10 years have been resolved in the world’s favor.

“It isn’t warming quite as fast as the model said but we’re being cut a little bit of slack because of a countervailing (cooling) ocean cycle,” he said. “We may gain 10 years.” But maybe not

“It might warm a little slower than we thought,” he said. “Who knows?”

By and large, we can have confidence in climate projections based on computer modelling, Keller said although there are improvements to be made from smaller scale grids and more detailed cloud formation, Regional projections are more advanced in some areas than in others, but those, too, are improving.

“The take-away is, it’s warming and it’s us, and there’s no doubt about it,” he said. “The people who really object to that conclusion are the people who confuse what people want to do about it with what’s happening.” And the nice thing, he added, is that it’s still possible to do something about it. Don’t be discouraged.”

Some 80 people from the Northern New Mexico community attended the conference, including members of the foreign service, scientists, lawyers, environmentalists, educators and citizens with active concerns. A number of students from area colleges and universities also participated giving the question and answer periods several generations of relevance and diversity.

Along with the speakers already mentioned, Douglas Fox, an independent science journalist with a strong science background who specializes in-depth reporting, gave a talk on the finicky ins and outs of ice melting in Antarctica based on his on-location experience and another talk on “Climate Change and Mass Media.”

Shana McDermott, Assistant Professor of Economics at the University of New Mexico addressed new economic models that incorporate global warming issues. Brian Hurd, Professor of Economics and Agricultural Business at New Mexico State University, talked about agriculture and water and how the parched regions of the earth, like our own, are going to make ends meet. Mayor Javier Gonzales of Santa Fe concluded the talks with a report on Santa Fe’s most recent environmental initiatives. 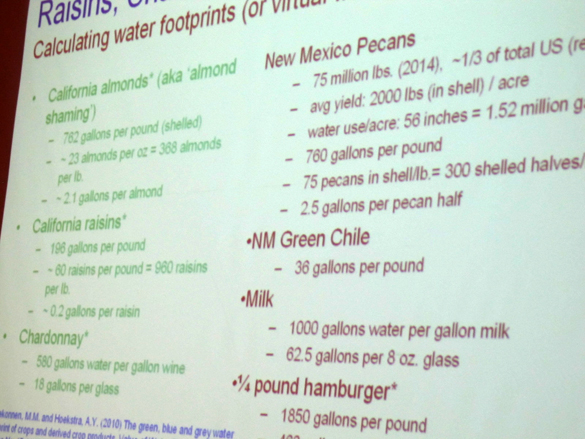