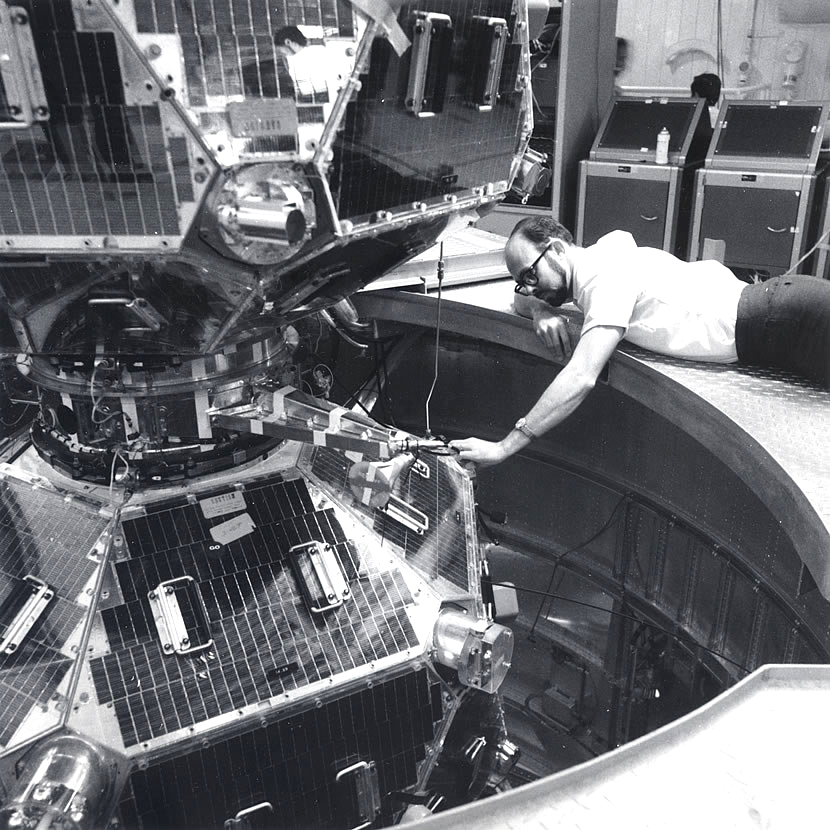 LANL researcher Richard Belian performs a final check of the Vela V-B satellite prior to its launch in April 1970. Vela V-B was the last of the Vela twin satellites launched as part of a program to improve the United States’ capability to detect, locate and identify nuclear explosions conducted in a variety of environments. Los Alamos is commemorating 50 years of space-based arms treaty verification efforts this month to coincide with the launch of the first Vela satellite Oct. 17, 1963. During the past 50 years, some 200 space vehicles have been launched with Los Alamos payloads aboard. Courtesy/LANL

Fifty years ago this month, Los Alamos National Laboratory sensor technology lifted off into space to help verify that world Superpowers were abiding by the newly signed Limited Test Ban Treaty—a pledge by the United States, the former Soviet Union and the United Kingdom to refrain from testing nuclear weapons in the atmosphere, underwater or in space.

“For the past 70 years, Los Alamos National Laboratory has serviced the country and provided technical solutions to the some of biggest national security challenges facing the nation,” said Terry Wallace, Principal Associate Director for Global Security at Los Alamos. “On Oct. 4, 1957, the Soviets launched Sputnik, an event that changed the world. Space became a national-security concern; Los Alamos played the key role in providing a space platform to monitor nuclear weapons testing and treaties, and 50 years later the lab still has this role.

“As we celebrate our golden anniversary of space-based treaty verification, we remember not only our successes in our mission, but also how this mission has enabled scientific discovery,” Wallace said. “Without a focus on national security, we could not continue to produce cutting-edge science; without our commitment to scientific excellence, we could not succeed in our mission. It is this synergy that makes Los Alamos a truly unique national treasure.”

The first pair of Vela satellites launched Oct. 17, 1963, just one week after the three nations had signed the historic treaty, and barely a year after the U.S. and Soviet Union had faced an extremely tense nuclear standoff during the Cuban Missile Crisis. With the launch of Vela—an abbreviated version of Velador, a colloquial New Mexican word for “night watchman”—a dangerous era of accelerated atmospheric and space-based nuclear weapons testing by the U.S. and Soviet Union subsided, thanks to collaboration between Los Alamos and Sandia national laboratories. One year later, China detonated its first nuclear weapon, underscoring the need for enhanced vigilance in a rapidly changing world.

The success of the Vela program marked the beginning of an enduring space-based treaty verification system that continues to enhance security for America and the rest of the world. Vela’s sensors focused on basic detection of electromagnetic- and energetic-particle emissions associated with open nuclear weapons detonations. But they also enabled serendipitous discoveries of remarkable natural phenomena such as cosmic gamma-ray bursts, X-ray novae and solar wind composition. Modern space-based verification systems rely on sophisticated sensors that have not only helped keep the peace, but also continue to help explain the origins of poorly understood natural events such as terrestrial lightning.

During the past 50 years, some 200 space vehicles have been launched with Los Alamos payloads aboard. Many of these support on-going treaty-monitoring missions, while others are experiments designed to push the boundaries of what is considered state-of-the-art. Notable Los Alamos experimental missions include:

In addition to these missions, Los Alamos space technology deployed on scientific satellites has helped scientists worldwide determine the elemental composition of the surface of the moon, including the presence of water; understand the structure and dynamics of the Van Allen radiation belts; characterize the moons of Saturn; study the origin of gamma ray bursts and supernovae; and, most recently, with key instruments aboard the Curiosity Rover, help characterize the Martian landscape.

“The capabilities and technologies we have developed and demonstrated in support of our treaty verification mission have also found wide application in basic space research, enabled our participation in multiple NASA projects and led to a number of important discoveries,” said Kevin Saeger, leader of Los Alamos’s Intelligence and Space Research Division. “It’s a source of great pride to ISR Division employees to be able to support national security and at the same time participate in the human quest for greater knowledge and understanding of the universe.”

An exhibit that includes highlights of Los Alamos National Laboratory’s 50 years of space-based treaty verification, starting with Vela, is on display at U.S. Department of Energy Headquarters in Washington, D.C. The exhibit will next go to the U.S. Air Force’s Space and Missile Systems Center in Los Angeles, and later to Patrick Air Force Base in Florida, key partners in the national program for space-based nuclear detonation detection.

Los Alamos is featuring achievements from the past 50 years in space throughout the month of October on its Internet home page, www.lanl.gov.