A Glimpse of the Engineering Behind the Science at LANL 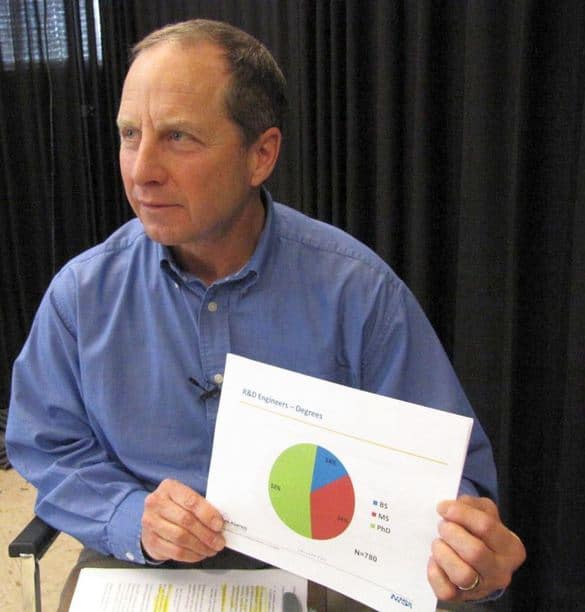 Editor’s Note: This is the first in a series of stories about the important role engineers play at Los Alamos National Laboratory.

February is National Engineers Month and several local engineers recently appeared on the Behind the White Coat Program now airing on PAC 8 to spotlight the role engineering plays at Los Alamos National Laboratory.

Steve Girrens, LANL’s associate director for engineering participated in the five-part series sponsored by Los Alamos National Bank. He explained what first drew him to the Laboratory.

“I was attracted by the name and what it stood for; big important science,” Girrens said. “For me in particular, space nuclear power. I chose what was then “Los Alamos Scientific Laboratory” over an offer from Bell Labs. Immediately, I was given the opportunity of harnessing the science of heat pipes into a practical device that could radiate waste heat in orbit and be launched on the shuttle.”

During the interview at the PAC 8 studios at 20th Street and Central Avenue, Girrens spoke about how he sees the collaboration between science and engineering.

“It doesn’t do physicists any good to have lofty ideas about how things work if someone can’t bring their concepts to actual, tangible, functional reality,” he said. “Without the engineering side of the house, one might say, it’s all smoke and mirrors. The Lab needs an engineering fabric to glue together its capabilities to support science. Engineers provide expertise that is conversant in the Lab’s science and that can meet science requirements with engineered systems; engineers deliver the tools enabling science.”

Girrens said that there is excitement in the challenge to apply science creativity “to satisfy bounding constraints and realize the widgets that will solve problems.”

Girrens shared several charts to illustrate current data on R&D engineering demographics including the various engineering fields at the Lab.

“Glovebox engineering is one field. In order to enable one of our most important and unique missions – plutonium science – engineers deliver the glovebox (a sophisticated environmentally isolating and radiological shielding chamber), the equipment supporting the glovebox utilities (poser, cooling, gases, vacuum) and the material manipulation tools and equipment (furnaces, machining, instrumentation) that goes inside to do the work, which may even include substantive robotics,” he said. “Engineers deliver the comprehensive suite of tools enabling plutonium science.”

Girrens also touched on the entry paths for students, what kind of student will be accepted at the Lab and what they will do when they arrive.

“First, I must emphasize that 56 percent of all R&D scientists and engineers currently at the Lab were students or Postdocs,” he said. “Last year alone, 71 percent of all R&D hires were former students or Postdocs. “The Lab’s UGS and GRA programs are instrumental. We also have the Los Alamos Dynamics Summer School program seeking candidates for the 13th year. Most any type of engineering student can find a match at the Lab with a GPA of about 3.2.  It is difficult for students to actually do engineering until they are UGS late juniors or seniors. The lab is very exciting and rewarding for GRAs and Postdocs.”

Before accepting his current position last fall, Girrens led LANL’s Technology Transfer Division. He also served in other capacities at Los Alamos, including the Engineering Sciences and Applications Division and as a group leader for Weapon Response and Engineering Analysis.