A Day Filled With Young Eagles and Smiles 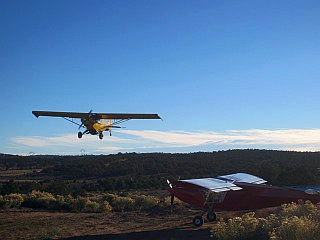 One Young Eagle waving at another just before the machine guns start blazing. Courtesy photo

One of the things I enjoy most as an EAA member is being able to participate in the Young Eagles program.

Recently, we were were asked by the airport manager at Lindrith (Population: 109), in the mountains of northern New Mexico, if we could fly some kids as part of the Young Eagles program.

We said sure and started to figure out how we were going to do it. You see, the Lindrith airstrip, which is just about on the Continental Divide, is at an elevation of 7200′ MSL and is only 3300′ x75′. It’s also a dirt strip with no facilities other than a barbed wire fence part way around it.

You know what kind of strip I’m talking about, it’s the kind of place local ranch kids like to use as a drag strip for their pickups.

It’s in hilly country, so the airport manager recommended taking off to the west, because if you can’t get the airplane to climb, there is a little draw you can drop off into to give you a little more time to figure out where you want the crash to occur.

When Jeff, our chapter president, asked for volunteers, only four of us were dumb enough to stand up. However, since there was some question as to how well one of the planes might do off a short unimproved strip, at high density altitudes, one of the pilots got to sit back down.

What is it about guys who fly Tri-Pacers? (Just kidding Roger:-) We ended up with a Super Cub, flown by Jeff, a straight tail Cessna 182, flown by Lloyd, and my Pegazair. Roger, Skip, and Travis volunteered to be our ground crew.

We figured that the 182 could take two kids at a time if they were little and light and the rest of us could take one each.

Since there was no fuel available, we had to carry enough to get there and back and do about five, 20 minute flights, before calling it a day.

The day came for the event and we were treated to some beautiful fall weather in New Mexico, clear skies, 100-mile visibility, and cool temperatures.

We were packing our ground crew with us, along with full fuel and the Jemez Mountains are between us and Lindrith so we had to go to 11,500′ MSL to get over them.

The Cub was climbing pretty slow with all that weight onboard and would probably run out of fuel before it got to Lindrith, so we called an air to air tanker for him.

We landed at Lindrith, where the field was in great condition, with only a few ruts on the east end.

Arriving at Lindrith for Young Eagles 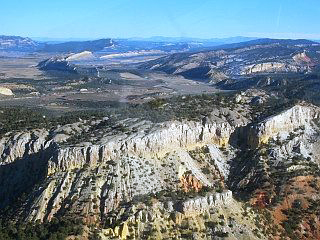 Pretty soon the airport manage ( Rol Murrow) showed up in his straight tail 172, which was going to be used for a static display for the kids.

The rear stabilizer worked out great as a table for our ground crew. Before long, pickups full families began showing up bringing kids to go flying.

The event was attracting folks from all the nearby settlements, as well as a few not so close. One young lady, I flew, had come up from Corrales, (over 90 miles away) to get a ride.

Pretty soon the place was teaming with action and our ground crew was busy doing the paper work and aiming kids at us to go flying.

The terrain around this part of the country is incredible and the kids all wanted to see their favorite haunts from the air. Is this spectacular country or what?

I’ve got to tell you a couple of stories about the kids. These kids are born and raised on farms and ranches.

They learn to ride a horse when they are four or five and to drive their folks pickup and shoot a .22 before their age hits double digits.

They don’t have a weight problem like a lot of american kids have. They get up early, work pretty hard before and after school, and go to bed early.

Most of them don’t talk a lot, but seem to listen pretty well. They use words like “yes sir” and “thank you” a lot.

Anyways, I took a young feller up, who was 10 years old and this was his first flight in an airplane. He was a pretty quiet lad on the ground, but no sooner had we taken off and turned east, when he looked at me a said “I know this country like the back of my hand.” I couldn’t conceal a smile, because this sounded like it came from the mouth of an old cowhand

Well, I showed him how to fly the plane, and when he got the hang of it, asked him where he wanted to go. He wanted to fly over his grandpa’s place in Gallina (Gallina is about 15 miles east of Lindrith.)

I asked him if he thought he could find it by himself, and he said, “Things look a mite different from up here, but I think its over that ridge line to the east.”

I said, ‘Let’s head over there and take a look.’ so we did and sure enough there was Gallina, and as he flew along he pointed out his house, his school and his grandpa’s place.

Grandpa was out in the front yard waving at us as his grandson flew an airplane for first time, around his house. I couldn’t see if Grandpa was smiling but this kid and I had grins on as big as a ranch hand on payday.

My last ride of the day was with a little feller who was nine years old. His older sister was going up in the Cub and I was taking him in the Pegazair.

When he got in the Peg, he was sitting pretty low and a long way from the rudder pedals, so he asked if he could sit on something to get him higher and closer.

His dad and I folded up our sweatshirts as seat pads and put a pillow behind his back, which seemed to satisfy him, but he could only reach the rudder pedals with the tips of his cowboy boots and wanted to know if that would work.

I told him he wouldn’t need to push them very much, so things should be OK. The Cub launched first and us shortly afterward.

I followed the Cub and as they left the pattern, I could tell when Jeff handed the controls over to to his passenger. The Cub’s flight path suddenly became very animated with climbs, turns, and descents.

I showed my YE pilot how to fly, tuned over the controls and could immediately tell these two kids were from the same gene pool. Neither one had any fear of flying and were having a ball maneuvering the airplanes all over the sky.

At one point after a near zero g pitch over, my young pilot stated, “this airplane makes my stomach feel funny.”

I asked if he was feeling sick and he said, “no, it just feels like my stomach is trying to jump out of my body.”

About this time, Jeff calls up and says that we ought to get a little closer so the kids can wave at each other, so I take the controls and close up on Jeff and the kids begin to wave madly at each other.

I tell Jeff that we will follow him for a while and when we get a little separation, I give the controls back to my young pilot and tell him to follow the Cub.

Jeff has obviously also given the controls back to his YE pilot, as the aircraft has begun to twist and turn all over the sky again.

My pilot is doing a pretty good job of staying on his sister’s tail when all of a sudden over the intercom I hear machine gun sounds.

I cracked up and called Jeff to let him know we have him in our sights and he is as good as dead. Me and the kid are all smiles as he follows that Cub back to the airport and does his best to shoot it down with his imaginary machine guns. 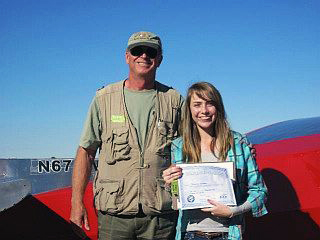 Photo: “We might just have a future pilot in the making here,” Will Fox said of this young pilot. Courtesy

Well, that was just about it for the day, but after I got home, I got an email from the 17 year old, who had driven more than 90 miles to get a ride and had asked me lots of questions about how to get a pilot’s license.

She thanked me for the ride and told me she was going to start working on her pilots license by making use of the free ground school that is offered online for Young Eagles.

I smiled again, and thought about all the other smiles that I had seen that day, and what a lucky guy I was. Then I thought, where do I get a kill insignia for a Cub?