A ‘Celebration of Life’ of Maureen Hudson is Sunday 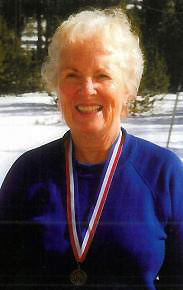 The community is invited to attend a “Celebration of Life” of Maureen Hudson at 2 p.m. Sunday, Sept. 16 at Fuller Lodge.
The longtime Los Alamos resident died Sept. 1, 2012 at the age of 83.

Maureen was unique; her love of life was ruled by an overwhelming enthusiastic desire to know as much as she could about a variety of subjects.

She not only had joy in her life, she gave joy to others. After a long debilitating illness, dementia took Maureen Hudson’s life.

Maureen was born in NYC in 1928. She enjoyed the streets and schools of the Big Apple for 18 years.

She could get on the subway for a nickel to Times Square and for 35 cents to see a show, sing and dance and watch all the Big Bands perform.

In 1948, she tried out and earned a position as a professional ice skater with “Holiday On Ice.”

During the last six years of her career, “Mo” (her nickname from show business) skated with a partner and performed in the major cities of Canada, the United States and Mexico.

The highlight of her act was to perform in the Hit Parade Christmas Show at Rockefeller Center. Maureen had the honor to be featured in one of the first shows to be televised on a national television network.

After 15 years in show business, Maureen hung up her skates and at the age of 35 enrolled at Central State University in Oklahoma. As a single mom with her son, Ty, she worked hard but graduated with a major in Health and Physical Education and a minor in Biology.

In addition to her academic work, Maureen lettered in swimming and gymnastics. After graduation, “Mo” accepted a teaching position at an elementary school in Carlsbad, N.M.

At a teacher’s convention in Albuquerque, she met Bill Hudson, a friend she had known in NYC before Bill joined the Marine Corps. Bill and Maureen were married in 1967.

Maureen got a job at Pojoaque High School as a Biology and Physical Education teacher. She started and coached hundreds of young students.

Maureen was a physical educator with Los Alamos Public Schools for 24 years. She retired in 1988, but soon after, she and Bill received an offer to teach in Puerto Rico.

While in the Caribbean, Mo and Bill island hopped from the Bahamas to Aruba. During this time, Maureen learned to speak Spanish.

During their 45 years of marriage, they enjoyed visiting Europe, Japan, China, Australia, New Zealand, Canada, Mexico and also all 50 states.

Mo was a woman of many hobbies and interests. She thoroughly enjoyed and excelled at knitting, sewing, calligraphy and astronomy. This lady also enjoyed juggling, studying sharks, fossil collecting and becoming very competent on her computer. Mo was an avid reader and a lifelong learner.

She competed in most of these activities at the local, state and national level and earned countless ribbons, medals and trophies of which she and her family were very proud.

Maureen was honored by being recognized as the first person to be selected on the Wall of Family of the Los Alamos Skating Association.

Her collection of antique ice skates were donated to the Los Alamos Parks and Recreation Department and will be displayed at the ice rink when the rink opens this winter.

Maureen spent many hours at the ice rink organizing, coaching and teaching.

She started playing on and coached hockey teams of adult women called, “The Mother Puckers,” and the “Mountain Mommas.” She also initiated the race of the “Zambonies.”

Her students, from tots to seniors loved and admired her skills and ability.

Maureen and Bill were the first couple to be recognized by the Los Alamos Fitness Center for their outstanding personal fitness program.

In 2005, Maureen and Bill were named Los Alamos Living Treasures.

Maureen’s outgoing friendly positive personality of kindness and caring will be remembered by family, friends and former neighbors.

The family wishes to thank the staff of “A Nurse in the Family” and the “Hospice Program” of the Los Alamos Visiting Nurse Service, for the excellent care they gave Maureen.

Contributions may be made in Maureen’s name to the Los Alamos Visiting Nurse Service “Hospice Program.”