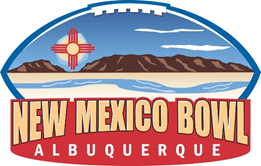 The New Mexico Bowl will kick off the collegiate bowl season for the fourteenth year, airing on ESPN at noon MST (2 p.m. EST) live from Dreamstyle Stadium.

‘We are very happy with another really good matchup in the New Mexico Bowl, two outstanding teams in the midst of excellent seasons,” said New Mexico Bowl Executive Director Jeff Siembieda. “San Diego State has one of the nation’s best defenses and is playing for double-digit wins for the fourth time in the past six seasons. Central Michigan is in the midst of a special season having gone from 1-11 to playing for the MAC championship with a high powered offense. This should be a great game and we look forward to New Mexicans along with San Diego State and Central Michigan fans descending on Dreamstyle Stadium in beautiful Albuquerque, New Mexico.”

Central Michigan won the MAC West Division Championship, going 8-5 for the season after playing in the league championship game. Head Coach Jim McElwain is MAC Coach of the Year in his first season in Mount Pleasant having five players First All Team MAC and two players Second Team. Central Michigan was fourth in the MAC in scoring (31.9 ppg), third in the MAC in Scoring Defense (26.8 ppg allowed), won six of their last eight games, and averaged 41 points per game in those eight games.

“Central Michigan is one of the best stories in college football this year and we are looking forward to hosting the Chippewas and their fans in the New Mexico Bowl,” Siembieda said. “The turnaround from a 1-11 season last year to the MAC Championship Game is remarkable. Jim McElwain and his staff have a really good, exciting football team in the midst of an exceptional season.”

San Diego State had a 9-3 overall record going 5-3 in the Mountain West. The Aztecs are appearing in a bowl game for the tenth straight season, which is the first time in school history that has happened. SDSU has five players on the First Team All Mountain West Team and four players on Second Team. San Diego State defense ranks fourth nationally in scoring defense (12.8 points per game allowed), fifth nationally in total defense (288.7 yard per game allowed), third nationally in turnover margin (plus-15), second nationally in rushing defense (72.3 yards allowed rushing per game), and went 1-0 vs. Pac-12 this season beting UCLA for the first time in school history.

“We are really excited to host San Diego State in the New Mexico Bowl for the first time,” Siembieda said. “The Aztecs have become a premier football program with a spectacular team and a passionate fan base. Congratulations to Coach Rocky Long and the entire program on another tremendous season.”

For tickets and more information regarding the New Mexico Bowl, visit newmexicobowl.com.