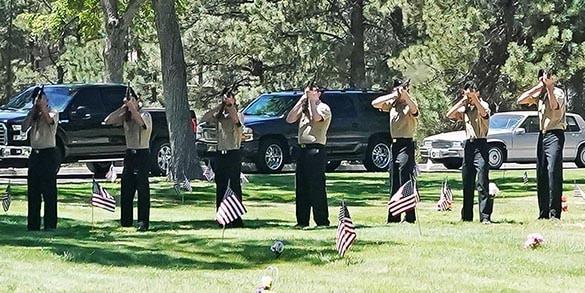 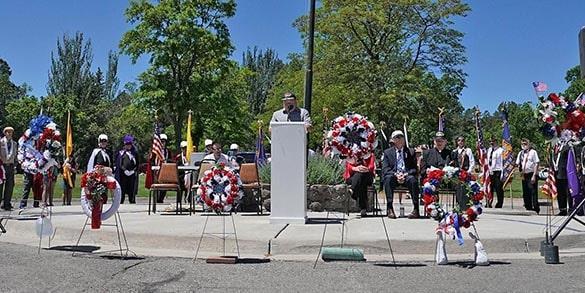 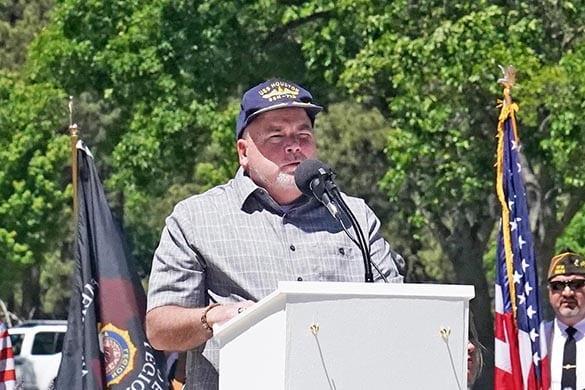 The Civil Air Patrol performed a fly-over and Los Alamos County Community Service Organizations participated in the placing of wreaths. John Fox of the Sons of the American Legion Squadron 90 performed taps.

Our Legacy of Service and Sacrifice

You can remember their voices from conversations you’ve had before them, whether in person or in your heart. They are our fathers, mother, grandfathers, great-grandfathers, brothers and sisters. And even if you’re not a Gold Star family member, a shipmate, a battle buddy, a friend or relative of a fallen hero, all you must do is look around here and you will see their legacy.

Early this morning, I was helping the Daughters of the American Revolution provide the flags for the graves. The sun was just rising slowly in the sky. It was very quiet except for a few family members visiting their loved ones and the volunteers putting up the flags. If you’ve ever been here on a quiet day, or a place like Gettysburg, Penn., you can feel it, you can hear it and you can imagine it in your mind from the books you’ve read, from the movies you’ve seen. Whether it’s Pickett’s charge at Gettysburg, or the raising of a flag at Iwo Jima, it’s our legacy of service and sacrifice. It is us, Americans fighting for a free society, unified with the purpose of honoring uncommon valor and bravery.

Ladies and gentlemen, boys and girls, fellow veterans, we are their legacy, we are their voice, we are their representatives. Regardless of the place or the war they fought, the purity of their sacrifice is without question. Young men and women that lost their lives to make the freedom of others, of us and future generations possible. They fought, they gave their lives, so we can live in this great free society.

More than a million U.S. heroes have lost their lives, had their dreams cut short while fighting in wars since the American Revolution. Time only permits me to tell just a few of their remarkable stories today, but these few are representative of many.

A century ago, America was engaged in what was called “The War to End All Wars”, “The Great War”, World War I. Arizona, our sister state, had a brash, young aviator who earned a reputation for recklessness – maybe he was from Los Alamos. Though he exasperated many of his superior officers, this 21-year old pilot claimed a remarkable 18 aerial victories, 18 dogfights that he won over German pilots in as many days. His name was Frank Luke. His missions usually involved bursting observation balloons which the Germans used to sight artillery.

On Sept. 29, 1918, 2nd Lt. Luke, a brand-new officer, a boot officer, shot down three balloons as he was being relentlessly pursued by eight German aircraft. Under heavy fire, his own plane unfortunately went down near the town of Murvaux, France. He survived the landing but not on the ground. Surrounded by enemy, he drew his automatic pistol and defended himself gallantly until he fell from a wound in the chest. Frank Luke was the first pilot to receive the Congressional Medal of Honor, the highest award in the U.S. Armed Services.

Twenty-four years later, the world didn’t learn the right lessons from World War I, so we had World War II. We all know Pearl Harbor and Dec. 7, 1941. Many of you may or may not know, early in the war we were not prepared for World War II, especially in the Pacific. It was a cruiser, the U.S. Houston, that I’m very familiar with, that was operating near Indonesia in the Java Sea and it was scoring many victories with an Australian task force against Japanese tankers and battleships.

Feb. 28 and March 1, they were engaged in a battle where they were surrounded by about a dozen Japanese ships. There were more than a thousand men on the U.S. Houston and it was sunk. They estimate that about half the sailors perished in the battle but half went into the water. Those that went into the water were taken prisoner by the Japanese and endured the rest of the war as prisoners of war. If you’ve seen the movie “Bridge on the River Kwai”, that was the U.S. Houston sailors that built that bridge.

The city of Houston thought the ship was sunk with no survivors. They raised money by recycling and other fundraisers and gave the United States government a $1 million a year and a half later because they wanted another ship named the U.S. Houston. I was fortunate enough to meet some of the survivors of the ship, the battle and the captivity. Let us remember all those POWs that have gone before us.

Let’s remember the Battles of the Bulge – there were two of them in World War II – 1943 and 1944. Frozen Austrian forests. My father and my uncle were in World War II were in both Battles of the Bulge. They not only had to fight the German enemy but the elements. Let’s remember the soldiers that fought gallantly there, those that survived and those that gave their last full measure. The story my father always told was how hard it was the first time he had to take the dry sock and the intact boots off a fallen comrade because he had frostbite on his feet. Let’s remember those in the Battle of the Bulge.

One of the greatest days in our recent history, D-Day, June 6, is coming up soon. My father was there in the afternoon in the Reserve and my uncle was there in the morning at Omaha Beach. He put one foot after the other as his friends were washing out with the tide after being killed. But normal Americans – farmers, coal miners, train operators, students, all answered the call to service and sacrifice. Let’s remember the Greatest Generation of World War II.

Fast forward 24 more years to another continent with yet another determined group of young American heroes. Sharon Lane was committed to caring for those heroes and entered the Army Nurse Corps in 1968. A year later, this 25-year old from North Industry, Ohio, was working hard at the 312th Evacuation Hospital in Chu Lai, South Vietnam. Women were exempt from the draft but 1st Lt. Lane was a volunteer and she was where she wanted to be – with wounded soldiers.

As our nation observed Vietnam Veterans Day Mar. 29, there was no Wikipedia page for Lt. Lane. She did not have the fame of Audie Murphy or the fame and medals of Sgt. Alvin York, yet she was just as much a hero as these.

Rocket and mortar attacks were common at her base in Chu Lai. In a letter home, she wrote of one attack, “We got all of the patients under the beds that we could and put mattresses over the ones in traction…Very Interesting place but hardly anyone here is scared. It is just like part of the job”. On June 8, 1969, 1st Lt. Sharon Lane made the ultimate sacrifice after a 122-mm rocket blasted through her ward killing her and a 12-year-old Vietnamese girl. Sharon Lane was the only female nurse to be killed by enemy fire during the Vietnam War. Let’s remember the Vietnam War vets.

Unfortunately, it doesn’t end with Vietnam. The heroes that we remember today are not exclusive to any gender, race or religion. They are a diverse group wedded to the common principle that America is a nation worth dying for. The principle deserves and demands our service and sacrifice.

Not all these heroes died because of enemy gunfire. Military service sometimes requires dangerous risk. Phyllis J. Pelky was born in Evergreen Park, Illinois in 1970. She attended the University of New Mexico and taught German and Humanities at Rio Rancho High School, not too far away. After 9-11, like many thousands of Americans, Phyllis wanted to serve her country as an Air Force officer, so she enrolled in Officer Training School. She was commissioned as a second lieutenant in June 2004 and began her service in Force Support.

She subsequently pursued her master’s degree, taught German at the Air Force Academy and served as an aide-de-camp to Gen. Michelle Johnson, Academy Superintendent, before her deployment to a NATO Coalition camp in Kabul, Afghanistan.

On Oct. 11, 2015, Major Pelky was one of five people killed in the crash of a British chopper, which was deemed an accident by British authorities. She loved her career as an officer, which was only matched by her love for her family.

Certainly, the four Marines who entered a CH-53E Super Stallion last month during a training exercise in Southern California did not expect it to be their final mission. Unfortunately, it was. On April 3 this year, four young men, all in their 20s, looking ahead to their lives in this great country, died as a result of that helicopter crash.

The youngest, Lance Cpl. Taylor Conrad of Baton Rouge, Louisiana, became a first-time father in October 2017. The longest-serving Marine of the group, GSgt. Richard Holley had completed two tours in Iraq. Capt. Samuel Schultz, also in that group, previously deployed with the 11th Marine Expeditionary Unit and his fellow pilot, 1st Lt. Samuel Phillips was from Pinehurst, North Carolina and joined the Marine Corps in August 2013. Let us remember those who have fought and lost their lives in the War on Terrorism.

They will be forever in our hearts and minds – not just these Marines but all soldiers, sailors, airmen and Coast Guardsmen who have made the ultimate sacrifice in the service of this nation. We also extend our gratitude and support for a group that nobody wants to join but has already given the country so much – the Gold Star families.

As we observe Memorial Day every year, these families remember their fallen loved ones each and every day. Children without parents, Gold Star mothers and fathers, spouses and siblings – you know they can still hear the voices of those that they lost. So, it’s up to us to hear the voices of these families, offer our support and express our highest gratitude. Whether the people we remember in our hearts and minds served in World War I, World War II, Korea, Vietnam, the War on Terrorism, or any place or any time in between, we say thank you for the freedom you have given us. We are here to enjoy the great freedoms of the United States because of you.

God bless you all, God bless America and God bless our fallen heroes.

Editor’s note: Prior to his retirement, Dan Mack served as the commander of U.S. Navy Squadrons 18 and 20 in Kings Bay, Ga. A 28-year veteran, he also served as the captain of the USS Houston. 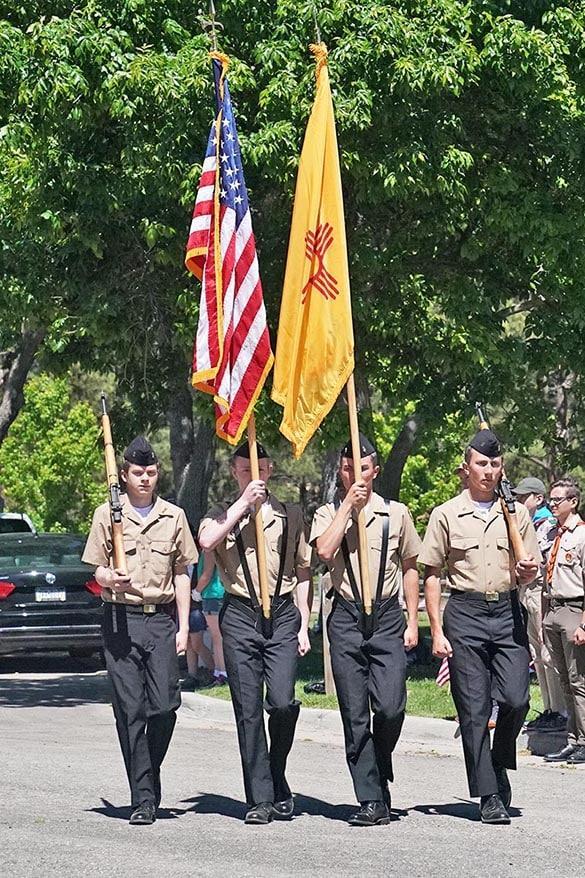 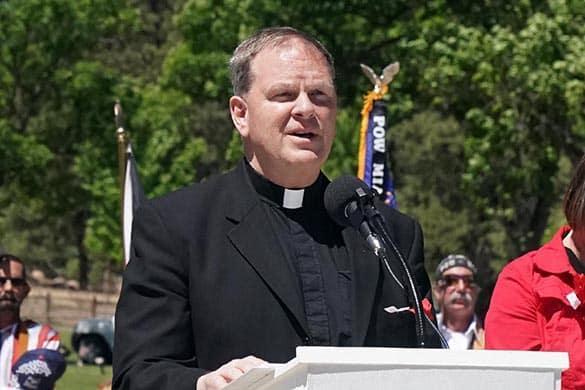 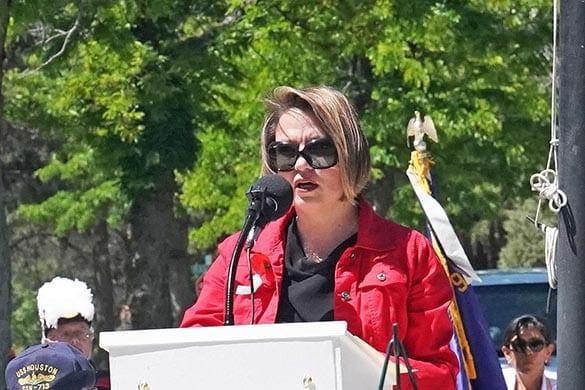 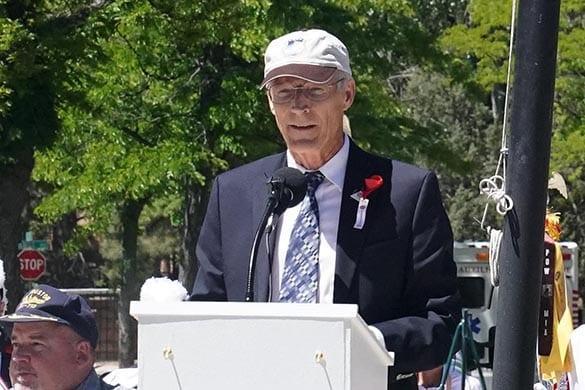 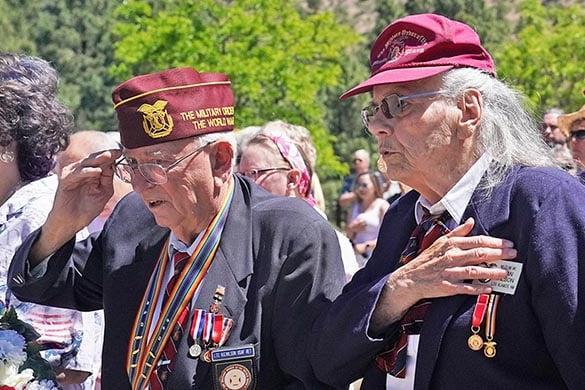 LT. COL. Norm Wilson and his wife Barbara Wilson participate in the placing of the wreaths. Photo by John McHale/ladailypost.com 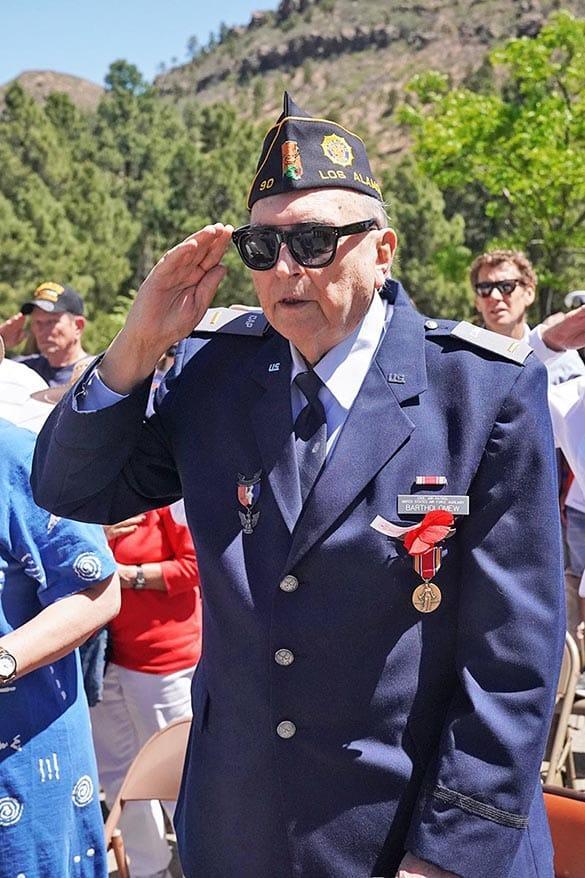 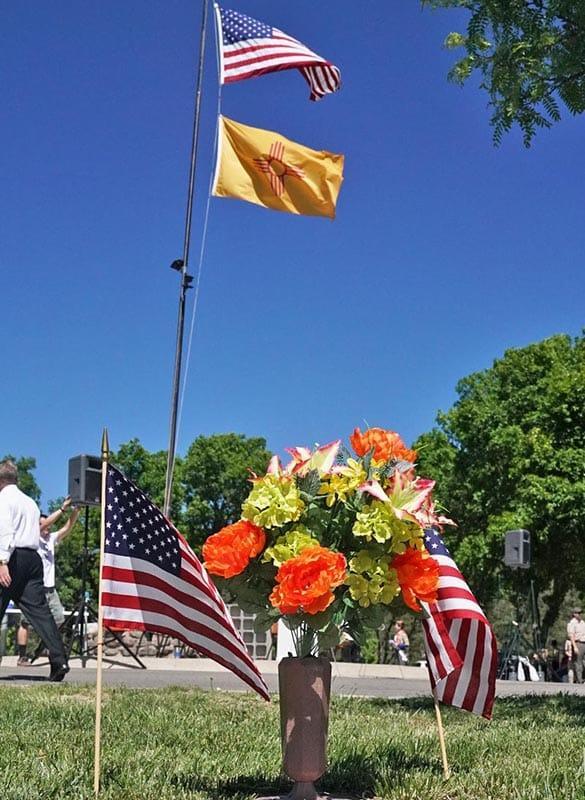 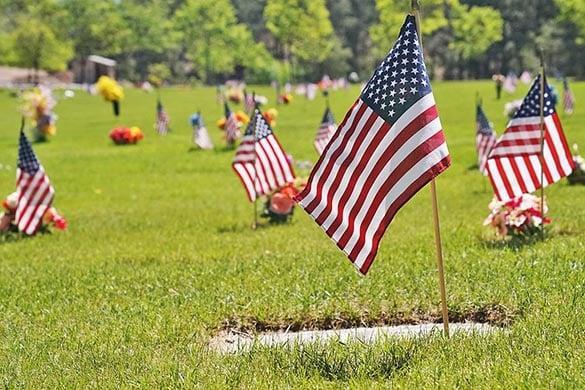 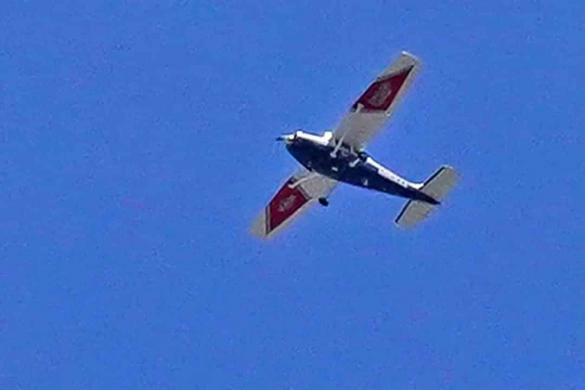 Fly-over by the Civil Air Patrol. Photo by John McHale/ladailypost.com 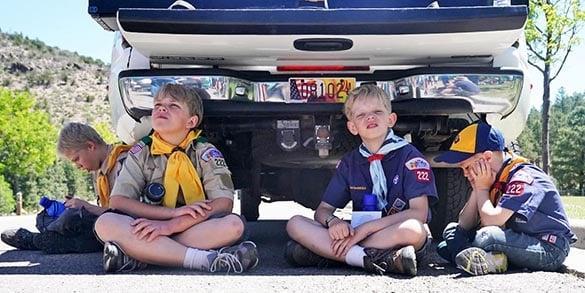 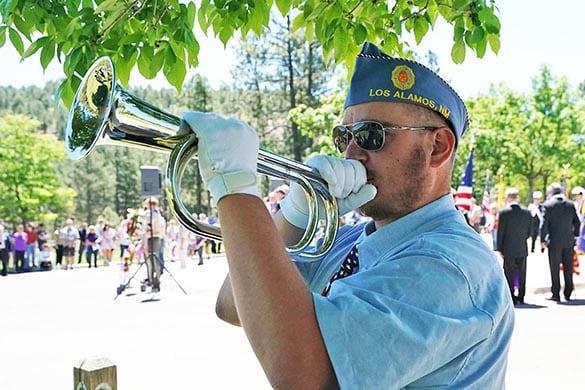 John Fox of the Sons of the American Legion Squadron 90 performs Taps. Photo by John McHale/ladailypost.com