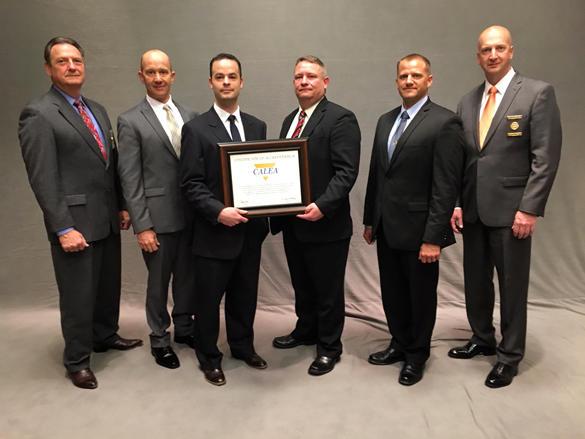 The Los Alamos Police Department achieved a number of milestones in 2018 including national accreditation in March from the Commission on Accreditation for Law Enforcement Agents (CALEA).

Police Chief Dino Sgambellone spoke with the Los Alamos Daily Post about the accreditation and also summed up the year.

“A lot of time and resources when into our accreditation assessment,” Sgmabellone said.

“It … was a true team effort,” Sgmabellone said. Adding that the police department, other County departments and the community contributed to this acheivement.

“Now Los Alamos is the only entity in New Mexico with a nationally accredited police and fire department,” Sgambellone said.

LAPD began working toward its accreditation in 2015 and now joins the ranks of just two other law enforcement agencies nationally accredited in New Mexico including the Farmington Police Department and New Mexico State Police.

In June, Sgt. Daniel Roberts graduated from the School of Police and Command at Northwestern University Center for Public Safety. He completed the 22-week Staff and Command Program in Evanston, Ill. The intensive program prepares law enforcement managers for senior positions by uniquely combining academic principles with practical applications. Los Alamos Dispatcher Cari Mace graduated in December as valedictorian of Public Safety Telecommunicator Class #141. Mace was one of 25 students from 17 different agencies in Class #141, and she had an average exam rate of 99.75 percent.

New Mexico Statue Chapter 29 Article 7C outlines the qualifications for certification as a Public Safety Telecommunicator. Every dispatcher must become certified within one year of employment.

New Mexico Administrative Code 10.29.10 mandates all PST complete a minimum of 130 hours of training in eight blocks of instruction that includes, but is not limited to, critical incident management and interdisciplinary incident command system, the National Crime Information Center, call processing, applicable technology, criminal offenses and the criminal justice systems at the municipal, county, state and federal level, interactions with individuals with mental impairments and crisis management, and fire and medical communications.

Police Ofc. Eric Wilhoit was promoted in December to sergeant during a promotion ceremony at the Los Alamos Justice Center. He was accompanied by his wife Rebecca, sons Kaiden and Kaleb, father Dennis Wilhoit and mother Mary Wilhoit.

Police wrapped up the year saving a potentially suicidal man. They responded together with firefighters Dec. 7 to the scene of the adult male subject who was on the Omega Bridge.

The officers and firefighters ensured the subject was safe and cleared the scene. Cmdr. Oliver Morris said at the time that this was at least the third incident on the Omega Bridge this year. He encouraged community members to call 911 immediately if they see anything suspicious on the bridge.

“Our citizens are our best asset for these types of situations … if they see something such as someone standing on the edge of the bridge, we want them to call 911 right away,” Morris said.

Looking back on 2018, Sgmabellone said the entire scope of the police department’s work doesn’t  always get publicized but its acheivements are representative of the hardwork and dedication its eimployees bring day in and day out.

Editor’s Note: Carol A. Clark contributed to this story.