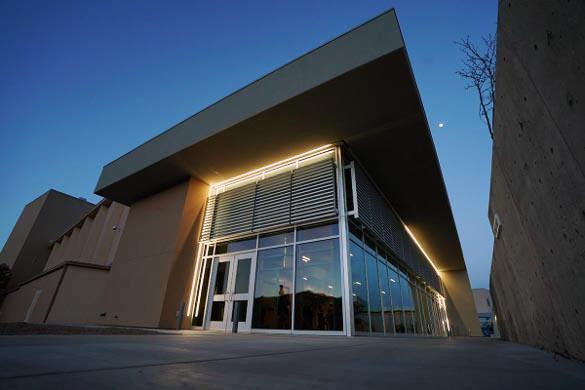 The renovation project at Duane Smith Auditorium is completed and the facility is reopened to the public and the schools. Photo by John McHale/ladailypost.com

This was a banner year for the Los Alamos Public Schools.

It took longer than expected but the finished product was worth the wait. Thursday, April 26, the community was invited to check out the reopened Duane Smith Auditorium. The auditorium had been closed since June 2017 for renovations to the lobby and restrooms.

For the first time in Duane Smith’s 55-year history there will be enough bathrooms to accommodate audiences. A new pre-concert area was constructed, which is used for chamber music perormances as well as pre-concert lectures. The project was a partnership between the Los Alamos Public Schools and Los Alamos County. Los Alamos County provided $1.2 million to the project and LAPS contributed $1.25 million. The goal was originally projected to be completed by December 2017; however, installing fire sprinklers and the permit process extended the project’s timeline.

Also in April, the Los Alamos School Board adopted a $37,953,364 million operational budget for the 2018-19 school year. The budget includes a 4.5 percent raise for all staff starting July 1, 2018. The total raise for LAPS staff over the last four budgets is 10 percent.

Los Alamos High School sophomore Lillian Petersen took the top award in her category May 18 at the International Science and Engineering Fair in Pittsburgh. Petersen’s project, “Predicting Food Shortages in Africa from Satellite Imagery,” won her the top placement in the Earth and Environmental Sciences category.

In September, the Public School Capital Outlay Council (PSCOC) approved $8.8 million in state matching funds for the Barranca Mesa Elementary remodel project; the local match via Bond funding totals $10 million. The total estimated cost for this project is $18.8 million. These funds will go to construction for renovation of the existing Barranca facilities. Los Alamos also received $266,145 for Pre-K classroom space at Barranca. After five attempts, this was the first time the request for a match was approved.
“Our patience and persistence paid off in securing the state match,” Superintendent Kurt Steinhaus said. “Securing this funding was a real team effort. Thank you for the support from the school board and to everyone at LAPS that worked on this proposal.”

UNM-Los Alamos got a a boost in March when longtime Los Alamos residents Pat Soran and Ann Hayes acknowledged the importance of the University of New Mexico-Los Alamos (UNM-LA) by founding the Community Endowment for UNM-LA through the Los Alamos Community Foundation (LACF) with a $10,000 gift. The couple provided an additional $5,000, which will be used to match any contributions made to the Endowment by other donors within the next two years.

May 16, President of the University of New Mexico Dr. Garnett S. Stokes spent the day visiting Los Alamos. She met with officials at Los Alamos National Laboratory, toured the town and talked with staff, students and faculty at UNM-LA. UNM-LA held a community reception for Stokes on campus. Stokes, 61, succeeded Interim President Chaouki Abdallah, who served in the role since the beginning of 2017. Stokes took office March 1.

Stokes kicked off her statewide tour in Los Alamos. “I’ll be back,” she promised. “Los Alamos is fabulous.”