2017 LAPS And UNM-LA Board Election Results 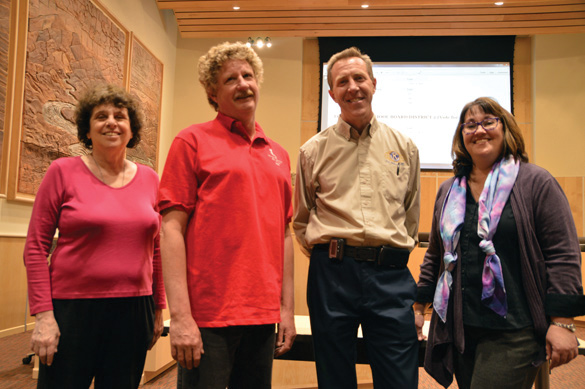 Winners of the 2017 School Board and UNM-LA Advisory Board races, from left, Sheila Schiferl Position 5 and David Sutton Position 1 on the UNM-LA Advisory Board. Michelle Hall (not pictured) ran unopposed for re-election to Position 2. Stephen Boerigter District 2 and Ellen Ben-Naim District 1 were elected to positions on the Los Alamos Public Schools Board. Photo by Carol A. Clark/ladailypost.com

Elections were held Tuesday for the Los Alamos School Board and the University of New Mexico-Los Alamos Advisory Board.

A total of 1,432 votes were cast. Only those in Districts 1 and 2, which are overwhelmingly composed of White Rock residents could vote in the LAPS Board Election. The UNM-LA Advisory Board is chosen at large, so voting was open to everyone.

While totals are significantly lower than for partisan elections, turnout was larger than in the previous Board elections in 2015. With small turnouts, races can be decided by a few votes. The closest race of the night was for UNM-LA Board Position 1. David Sutton, who serves on the Board, defeated challenger Michael Redondo by just 25 votes.

“I’m very thankful to the voters for the confidence they are placing in me, for change and for a fresh perspective,” Ben-Naim said. “I’m looking forward to rolling up my sleeves and getting to work to make our great schools even better.”

In District 2, Stephen Boerigter defeated Darryl Sugar. “I’m excited about this opportunity to serve the community in a new and important way,” Boerigter said.

In UNM-LA Advisory Board Position 1, Board Member David Sutton defeated Michael Redondo by 25 votes. “I’m thankful to everyone who voted for me,” Sutton said.

Current Board Member Michelle Hall was unopposed for Board Position 2.

“I ran for reelection because I have not met more dedicated faculty and staff at any university than those at UNM-Los Alamos,” Hall said. “It is an honor to be a member of the Advisory Board and to be able to help them achieve their lofty goals.”

Scheila Schiferl defeated James Robinson for Board Position 5. “I’m excited and thankful to all of the people I spoke to while knocking on doors. They’ve already given me my marching orders!” Schiferl said.