2016: The ‘Regime Change’ Election And What Comes Next Part 1

This series of articles answers the questions of “What happened in the 2016 Election, and Why?” I believe the current situation is like a storm on the sea. Lots of froth on top, masking deep currents underneath.

Several friends, knowing I follow social and political trends, asked me, “Jim, what the H— is going on?”. Intrigued, I researched and developed a presentation with which independents, liberals, and conservatives seem to agree. This series of articles expand on major elements of the presentation titled, “2016: The “Regime Change” Election and What Comes Next.”

I have given the presentation to several groups and am happy to continue to do so in the future if anyone is interested.

The Thesis: The digital revolution began to fully mature around 1970 resulting in greatly increased national wealth, primarily through trade. Elites arrogated that wealth at the expense of the middle classes, who suffered economically and culturally. Following historical precedent, the proletariat attempted regime change. I predict it will fail.

The social and technical “currents” are (1) the digital revolution that enabled (2) tremendous increases in global trade, wealth, and cultural change, and resulted in (3) the economic and cultural decline of the “middle class.” Note I draw from many different sources who, in turn, draw from different data, so there are definitional issues, e.g., with “middle class incomes”, that cause some minor discrepancies in graphs and data.

Trends (currents)
The Digital Revolution: The Digital Revolution started in the1950’s and really “hit its stride” around 1970 (equivalent revolutions in fossil fuels took 250 years and in electricity took over 100 years).
Computing and Communications Power: I lived this–I started scientific programming in 1967 and business programming in 1972. The big change: an explosion in computing and communications power. I first programmed in Fortran and Assembler, my first sysgen was on a 32K machine with 9M of disk, and years later I was delighted to obtain a 300 baud modem (ask your grandfather what these mean).  Now, everyone has greater power on a smartphone than a Cray 2 (again, ask an elder).

Application of Computing and Communications Power. Early digital systems were intended to make existing processes work better: I worked on early scientific applications (orbit calculation and wave propagation in Fortran and Assembler) and accounting, inventory, payroll, and others in COBOL and a number of now-forgotten languages. Now, applications revolutionize society. 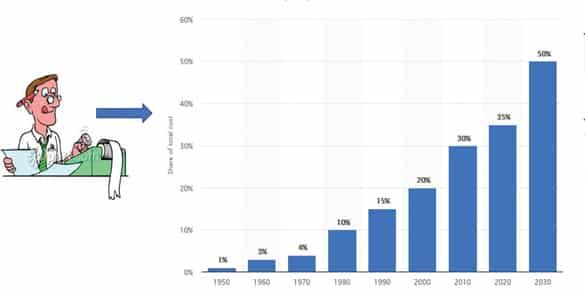 The Changing Face of Wealth.  Corporate wealth used to be based on property and employees. Now it is based on the number of users (note there are only two industries that call their customers “users”). I have a CEO acquaintance leading a $300M company providing applications to educational institutions: he has almost no real estate, very little depreciable property, few employees, but obsesses over the number of users. In 2013, the average valuation of a user of Facebook, Google, and Linkedin was between $90 and $200+.

(https://www.forbes.com/sites/tristanlouis/2013/08/31/how-much-is-a-user-worth/#34791fdd1c51). The value of a Walmart customer is probably not much more, even though Walmart has billions in property and 2.1M employees.

Second Big Trend: The increase in world wealth.  The major factor in increased wealth has been digitally enabled trade growth: the evidence is strong.

Anecdotally, when we lived in Lexington, MA, in 1975 I had an extensive discussion with a sports clothing company CEO who was beginning to manufacture in China and how this was being enabled by his ability to communicate with suppliers in China (faxes, how quaint). 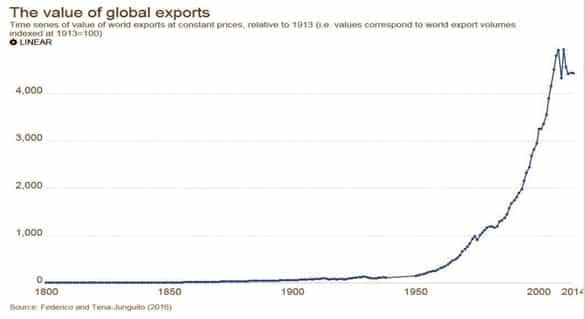 Next, as an example, the increase in wealth in England, a trading nation (note the longer time scale). 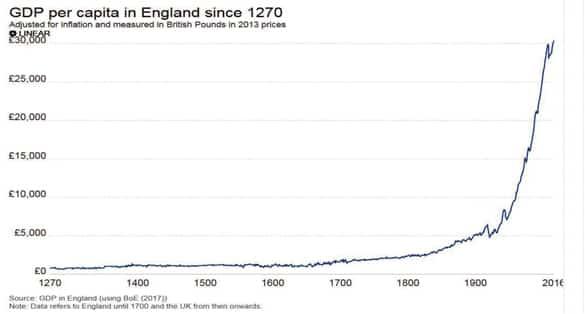 The growth in world wealth including all factors: technology, trade, increased resource values, etc. Other graphs and extensive data showing the increase in wealth of various parts of the world is available at the Maddison Project, the Groningen Growth and Development Centre, University of Groningen.

And, what this has done for people living in extreme poverty worldwide. 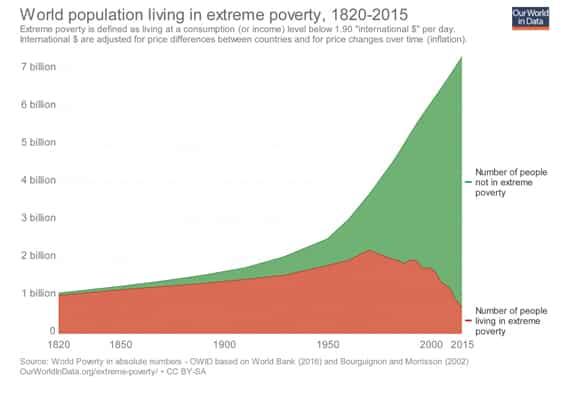 Impact of This Technical Revolution on Culture

The final important impact of this revolution has been to increase cultural differences among Americans. See a lot of detail data at http://www.pewsocialtrends.org/. We have always been aware of the culture changes being driven by technology. Currently there are several journals and centers that address the impact of technology on society, mainly historical technology/societal interactions. Those interested can look at the Journal of Technology and Culture and at the Center for Technology and Society.

Note the concept of human technology changing culture has been around for a long time, e.g., from Antigone, written by Sophocles in 442 B.C.

Man the skilled, the brilliant!
He conquers all, taming with his techniques
The prey that roams the cliffs and wild lairs,
Training the stallion, clamping the yoke across
His shaggy neck, and the tireless mountain bull.
And speech and thought, quick as the wind
And the mood and mind for law that rules the city —
All these he has taught himself
And shelter from the arrows of frost
When there’s rough lodging under the cold clear sky
And the shafts of lashing rain —
Ready, resourceful man!
Never without resources…

How is this time different? Three ways.

First, this technical change is happening much faster than previous ones, generating more social disruption in less time: in business, jobs, science, knowledge dissemination, and every other field. Rather than taking five or six generations, this technical revolution (not halfway completed, BTW) is happening in two.

Second, it has also made major changes in our human interactions. “We’re lonely, but we’re afraid of intimacy. And so from social networks to sociable robots, we’re designing technologies that will give us the illusion of companionship without the demands of friendship,” Sherry Turkle, an Abby Rockefeller Mauzé Professor in the Program of Science, Technology, and Society at MIT.

(My comment: Have you ever seen two teenagers sitting across from each other and texting each other instead of talking?)

Finally, and most applicable to these issues, we can avoid (1) interacting with people that disagree with us and (2) hearing or seeing information with which we might disagree. Our tendency for confirmation bias is now on steroids.  More detail on this issue follows in Article 3.

Third Big Trend: the decline of the US middle class. The middle class is declining economically and culturally. The cultural decline is probably as important as the economic decline. This will be the major issue discussed in the next article. Just as a teaser, though, let’s look at a conceptual graph: The Graph that Explains Everything”. See the second and third articles for more. 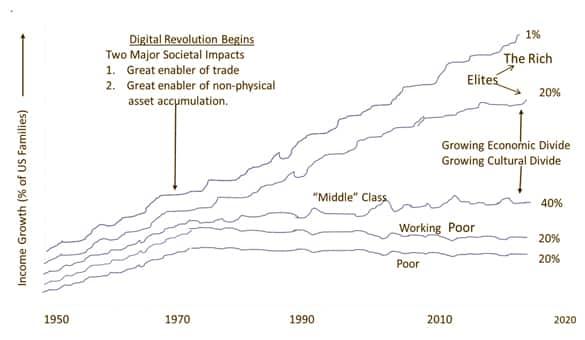