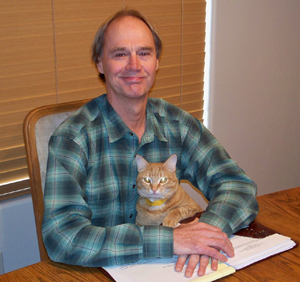 My wife, Deb, and I enjoy our life in red rock southern Utah and have many things for which we are thankful. I hope sharing them brings a smile and acknowledgement that even the seldom thought of can be a source of thankfulness.

1. I appreciate earth’s large moon. It is waaay larger in relation to the size of the earth than any other moon in the solar system. At about 2,159 miles in diameter, our moon is larger than Pluto. It moderates the tilt of the earth’s rotational axis which produces fairly constant seasonal changes over millennia. This in turn means once life gets started it is not knocked down by extreme climate change. In a real sense, those of us more than simple life forms owe our existence to the moon. The moon is the only place besides earth where humans have walked. It also causes tides, giving surfers something to do. Yea moon!

2. I’m thankful to Willis Carrier. No, he did not invent the aircraft carrier, although they are impressive. Born in Angola, N.Y. in 1876, Carrier graduated in 1901 from Cornell University with a degree in engineering. The next year he developed the first modern electrical air conditioning (A/C) unit. While A/C was available to residential units by the 1920s, it wasn’t until the 1950s that it became common in houses. People survived and thrived in desert areas like St. George prior to the introduction of residential A/C—they were tough in those days.

3. Our entire family, especially our cats Dave and Molly, are grateful to live in St. George where the humidity is low just about all year long. You might think this is important because the summer heat (generally 100+ degrees) is bearable due to the low humidity.

While that is a factor, the main reason low humidity is great is because of the lack of fleas. Fleas do not exist in St. George; the eggs need a certain percent humidity (at least 50%) to hatch. It is seldom that humid, and never for long periods—the flea life cycle is uncompleted. In our former home in coastal California fleas were a constant irritant to our animal companions and us. In St. George we do not need to give our pets slow poison via a flea collar or comb and pick the little suckers (fleas suck blood, get it) out of their fur. Siphonapterology (the study of fleas) made simple!

Low humidity also encourages electrostatic discharges (static electricity). So sometimes after walking across the room and Deb and I touch, little sparks jump from our fingers. The electricity is still there—how romantic.

4. Deb and I love to explore slot canyons and are thankful for the erosive power of running water in creating them. While traversing a slot canyon our world is vastly constricted—we are small humanoids in a convoluted stone labyrinth. Exploring a slot canyon is not for sissies. There is always the possibility an earthquake or rockslide will produce a rocky tomb with you as the tombee. Or the chance rainstorm, even many miles away, creating a flash flood that sweeps you to nirvana. Perhaps a rattlesnake is waiting around the next bend. Small risks for a huge payoff.

Slot canyons are the average person’s space visit—exploring spectacular and exotic environments. In my humble opinion, slot canyons are the most alluring type of terrain around. Exploring them challenges us to, at least for a short time, live on the edge in a bizarre world.

5. I’m grateful for quantum physics because it shows that even really smart people can have difficult time understanding and explaining some aspects of the physical world. As we all know, quantum physics (or quantum mechanics) is a branch of physics concerned with the properties and behavior of atomic and subatomic particles.

Included in the weirdness is Schrodinger’s Cat, a famous thought experiment in which a cat is both alive and dead simultaneously. This paradox is resolved once it is observed and the cat will be either alive or dead. Niels Bohr, a Danish Nobel Prize winning physicist said, “If quantum mechanics hasn’t profoundly shocked you, you haven’t understood it yet.”

6. Deb and I appreciate many things about our four-legged furry family members. One amazing and admirable attribute is their stealth ability. We can be working in the garden and ninja-like Molly appears to help. Many times I have been at the computer intently focused on researching a new hike and all of sudden a cat is in my lap. The little furballs never cease to amaze.

I hope everyone recalls the many things, obvious and not so obvious, to be thankful for this Thanksgiving.